Feed-in tariffs for generated energy are often seen as dis-incentivizing for storage. Indeed, if one gets an advantageous payment for energy delivered to the grid, why should the energy be stored and later self-consumed? With the introduction of “self-consumption” tariffs, German policy-makers tried to solve this problem for PV.

Feed-in tariffs for renewable energy sources, introduced in Germany during the ninties, have been a successful policy instrument to deploy renewables. The general concept is the payment of a fixed tariff for each kWh fed into the grid. The compensation level, as well as the duration of the tariff, is technology-specific. The feed-in tariff rules are described in the Renewable Energy Sources Act (EEG), which was last amended in July 2011. 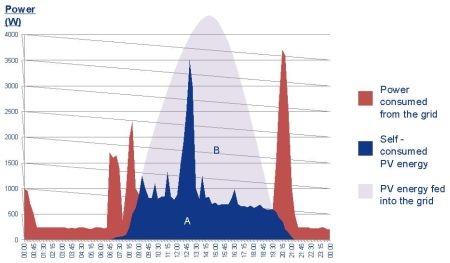 Increasing the self-consumption rate is a mean to reduce the burden created by PV on the distribution grid. In order to incentivize this measure, the EEG law has since 2009 foreseen a payment for self-consumption: if one consumes the electricity generated, one will be paid. So, not only does this user not purchase the electricity from the grid, but in addition, she get an extra “self-consumption” tariff.

These tariffs are differentiated (meaning, the more one self-consumes, the higher the tariffs) and are applicable for facade, building roofs and soundproof walls, and for power ratings below 500 kW.In 2012, self-consumption tariffs can exceed 10c€/kWh.

Germany is the sole country in the world to incentivize self-consumption for solar PV. These tariffs are applicable for installations commissioned until 2013 (this scheme, which was to end in 2011, was indeed extended for two more years in July 2011) paving the road for potential numerous developments in the German behind-the-meter landscape.

But if this scheme could incentivize battery storage at the household level, other solutions in the “micro-generation” market could compete. Rising electricity bills for households in Germany indeed foster the emergence of new technologies and “self consumption” business models. Micro CHP and fuel cells are alternatives to PV for the micro generation. And heat storage could also be an alternative to the battery.

Even if, with today’s numbers, most of these solutions remain uneconomic, the situation is likely to change soon as technology costs are brought down and electricity prices rise. In this new landscape, incumbent utilities may loose some precious market shares, as some of their customers slowly “vanish” and become self-consumers of their own generation.

What game will incumbent utilities be able to play and which services will they design to keep a grasp on these households who, through the use of storage or micro-generation disappearing from their customer base?

This article was originally published on Clean Horizon Consulting and was republished with permission.