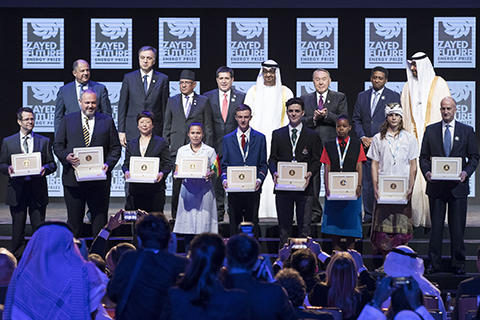 The award was presented to GE vice-chairman John Rice during the opening ceremony of Abu Dhabi Sustainability Week.

The judging panel said GE had won because of its “leadership in the wind and solar energy markets.”

The panel noted that GE’s wind business alone has to date commissioned 41.3 GW of total generating capacity and installed more than 30,000 wind turbines.

The company was also recognized for its ‘Ecomagination’ program, which aims to tackle energy efficiency and sustainability in its products and services. GE has a target to reduce its overall greenhouse emissions 20 percent by 2020, from 2011 levels. To date, it has cut the emissions from its operations by 12 percent.

The man who has been China’s driving force in the adoption of renewables and climate change policies won the Zayed Future Energy Prize Lifetime Achievement Award.

Li Junfeng is director-general of China’s National Centre of Climate Strategy Research, and in a career spanning more than 30 years, he has been instrumental in driving forward the country’s renewable energy policies, which have spurred record levels of clean energy investment in China.

He has helped implement China’s program for wind and solar PV for the country’s 10th five-year plan, and was one of the chief authors of the Chinese Renewable Energy Law. Junfeng has been an outspoken opponent of coal and supporter of renewable energy, and the Zayed judging panel said his policies enabled China to become the world’s largest renewable energy investor in 2015.

Sonnen, a German smart home and commercial energy storage system manufacturer, won the prize in the Small and Medium Enterprise category for leadership in providing battery storage technology solutions, while the award for Non-Profit Organization went to UK-based Practical Action. The charity was recognized for its work in providing deprived communities with clean energy in Africa, Asia and Latin America.

Since its inception, the Zayed Future Energy Prize has received over 10,000 nominations and submissions from more than 100 countries. In 2016, the prize received a record 1,676 entries from 103 different nations, a 22 percent increase on the previous record set the year before.