San Diego, Calif. — Fukushima experienced the world’s worst nuclear disaster since Chernobyl when a 9.0 magnitude earthquake hit three years ago. Now, the region is trying to turn the “lost landscape” into massive renewable energy fields. The prefecture has declared “zero dependency on nuclear energy” and created a goal to meet 100 percent of its electricity needs with renewable energy, such as solar, by 2040. The prefectures also believes that investing in renewable energy will spur economic development and create jobs to help its recovery and rebuilding efforts.

In April, a 1.2-MW solar photovoltaic (PV) system was completed at the Fukushima airport that is very visible not only to local people but also outside visitors. The 400 million yen (US $3.9 million) project was fully funded locally, and meant to signify the prefecture’s strong commitment to renewable energy.

According to a city official, the prefecture invested 45 million yen (US $443,000) to create the Fukushima Power Company, a special purpose entity, to develop the Fukushima Airport Solar Power Project. Local city governments and businesses also made equity investments in the company, while local banks provided 200 million yen in debt financing. Furthermore, citizens in Fukushima raised an additional 100 million yen for the project.

In the same month, the prefecture opened the “Fukushima Renewable Energy Research and Development Center” with the National Institute of Advanced Industrial Science and Technology (AIST), a publicly funded research institution, for advancement of solar technologies in the prefecture. The Research Center monitors and analyzes the efficiency and effectiveness of different modules and system structures at the airport. The center will also research other renewable energy technologies such as wind and geothermal, and transfer knowledge and advances to create jobs in the prefecture.

Iwaki city, located within a 50-km radius from the Fukushima Daiichi nuclear power plant, developed a 1-MW solar system “of the people, by the people, for the people” in Iwaki city. Solar Energy Iwaki, a special purpose entity, owns the system while the Ethical Energy Project Iwaki, a non-profit organization created by local citizens, maintains and operates the system.

All electricity produced from the system will be sold to the Tohoku Power Electric Co, a regional investor-owned utility, with a 20-year feed-in tariff (FIT) contract. A portion of the revenue will be used for recovery and restoration of the town.

Machizukuri Zeene, a non-profit organization in Fukushima city, has been operating a free bus transportation service for seniors in the town. The organization faced difficulty covering the cost of operation through revenue from advertisements on the bus.  To take advantage of the premium rate paid for solar energy, the organization decided to develop two 50-kW PV systems.  Currently revenue received from the FIT supports the cost of the transportation operation and keeps seniors mobile.

Several golf courses were closed due to the physical damage caused by the earthquake and others were closed due to a large reduction in the number of golfers, who stopped the activity due to fear of radiation from the nuclear power plant. As temporary storage sites, some golf courses were filled with bags of radioactive waste, however, others have been turned into solar generation sites filled with solar panels.

Mori Trust Co., a developer of real estate, hotels, resorts, and golf courses, turned the Laforet Shirakawa Golf course at Nishishirakawa town into a 2-MW solar project. The earthquake resulted in mudslides and cracks in the ground in the golf course. “We consider re-opening the golf course, but to support and create new economic opportunities in Fukushima, we closed the golf course and created a clean power plant instead,” said a manager at Mori Trust. About 10,000 solar panels covered over two holes out of the total eighteen holes at the former golf course. The company is planning to develop an 8-MW solar system over the remaining sixteen holes.

A 26.2-MW solar project is now under construction at another golf course in Sukagawa city. JFE Engineering Co., an EPC firm, is building the solar system at the closed golf course near the Fukushima Airport. Sunny Health Company, a distribution of health foods and beverages, purchased the golf course site, which has been closed due to the disasters. The project, with Hanwha Qcells modules, is expected to be operational by March 2015.

Minamisoma city is located 25 km from the nuclear power plant. On the city-owned, tsunami-affected land, the city built the Solar Agri Park, which includes a 500-kW solar system and two dome-shaped greenhouses. Using hydroponic technology, plants are held in a medium without soil and receive a constant flow of nutrient-rich water at the roots. This method allows farmers to return to farming, eliminates use of possibly contaminated soil and removes consumer’s fear and risk of exposure to radiation.

A portion of the electricity generated from the 500-kW system is used for the green houses to produce 400 lettuce plants and 450 celery plants daily and the remaining energy is sold to the Tohoku Electric Power Co. under the 20-year FIT contract. The park is also used to educate children in Minamisoma and other parts of Fukushima about sustainable lifestyle with renewable energy and local farming. 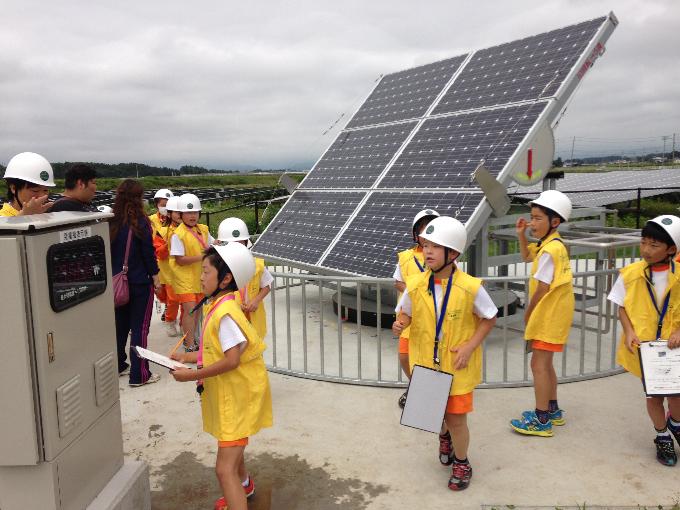 The project started last November with the greenhouse, on which 324 solar thin-film panels were installed. The solar panels cover about 25 percent of the roof space so that they don’t affect the growth of the strawberries and tomatoes planted underneath. Harnois Greenhouses, a division of Industries Harnois Inc., a Canadian manufacturer of steel structures, provided the structure of the greenhouse and Belectric, a German EPC firm, designed the solar greenhouse system. The greenhouse was designed to bear the weight of solar systems.

Near Future Plans for Fukushima

This goal appears to be easily attainable. As of January 2014, Fukushima already had nearly 1.6 GW of FIT-approved PV capacity.

While the federal government described nuclear power as an “important baseload power source” in the energy plan released in April, Fukushima is making important strides toward zero nuclear power.