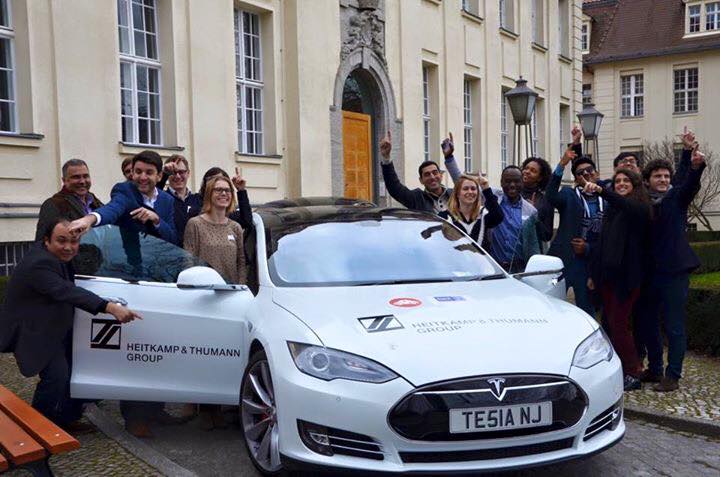 TESLAS DRIVING IN OPPOSITE DIRECTIONS

The day started early as we had a 1200km drive ahead. In a traditional engine convention car the journey would take us around 13 hours; however, in a Tesla electric car the expected duration of the journey was 17 hours. Despite the early start, the team was in good spirits and excited about driving through the Swiss Alps.

We made really good progress towards our first Super Charger Station, but I had an uncomfortable feeling I had forgotten something. I checked the back boot, and then the front bonnet (Tesla cars do not have an engine in the front) but, as feared, my laptop could not be found! I was devastated and didn’t know how to break the bad news to the rest of the group. In the end, Afeez and Ben agreed to drive me back to the hotel. We took Jupiter as it had enough battery to get us to the hotel and back to the next Super Charger station.

TIME WAS AGAINST US. WE COULDN’T MAKE IT TO THE US EMBASSY…

Two enthusiastic representatives, Kari Hatcher and Juliana Walsh, had invited us to visit the grand US Embassy in Berlin, located next to the Brandenburg Gate. As we drove back to the hotel, we considered their kind offer, but decided that time was against us. Instead we headed straight back to Berlin and picked up my laptop.

We did not expect to catch up with Thor and Aurora any time soon. However, to our surprise everything turned out to work better than expected: there was little traffic, and Afeez’s efficient driving style ensured that we joined the rest of the team at the first intended Super Charger station in no time.

Walking into the restaurant at the Super Charger station we were given a rapturous applause. I felt like a Prodigal Son being welcomed back home! With cars charged, we continued our journey south.

YOU CAN’T MISS THE EXIT IN A TESLA

Ben, Afeez and I were cruising at 140km/h, gliding noiselessly over the motorway as we approached the third Super Charger Station near Nuremberg. Suddenly Afeez slammed his foot down on the breaks, thrusting the steering wheel to the right and coming to a dramatic halt on the hard shoulder, just missing the exit by a mere 20 metres.

We had to double back on the emergency lane as cars and trucks were wiping past us, sometimes with speeds up to 200 km/h. Without this manoeuvre, we would not have been able to charge our Tesla and reach the next Super Charger station. Afeez began crawling the car backwards, just doubling back far enough to take the exit for the Super Charger Station. Relief.

Lesson of the day: You can’t miss the exit to a Super Charger Station unless you don’t want to reach your destination!

The sun had already set by the time we got to Switzerland. Slowly the night blanketed the surrounding mountains, covering the valleys, forests and villages tucked into the mountain sides.

We were delighted by the beautiful contrast of the white mountain peaks and the dark blue backdrop of the star-strewn night sky. Ludovico Einaudi was drifting through the car as we went downhill and I was awestruck at every turn we took. It was cold outside, but our Teslas stood up to the challenge and kept us warm.

Slowly we reached the edge of Switzerland and headed into Italy, crossing into Piedmont and charging onwards to Turin.

Matheus noticed how the speedometer on the dashboard was showing we were generating energy instead of consuming energy. This was due to the smart regenerating braking system of the Tesla
which converts the vehicle’s kinetic energy into chemical energy. This usually happens as you are going downhill, as we were when heading to Lombardi.

As we pulled into the Super Charger Station at around 1.25am, everyone began to sing to celebrate Ben and Maher’s joint birthday! We cranked up the volume in the car and danced Zorba around a water bottle to music by our Greek DJ Andreas. The whole scene was slightly surreal as we were standing on a parking lot at high altitude and the mountains were covered in snow, with no little more than a gas station and a few shops lining the street.

This type of behaviour became common for us, especially when charging the Teslas in the early hours in the morning.

The last two legs of the journey was rather tiring and passengers were nodding off to sleep despite trying to motivate one another to stay awake. It took 22 hours to drive from Berlin to Turin! We had just four hours of sleep available before we had to be ready for the Energy Conference at the ESCP Europe Turin Campus…