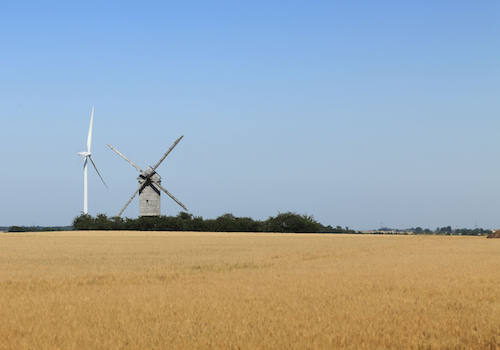 The French government has announced fresh targets for renewable energy capacity to be installed by 2023.

The new objectives — published within France’s multiannual program of energy — Plan de programmation pluriannuelle de l’Energie (PPE) — will serve as trajectories to be used in defining the priorities for the French government in relation to the development of renewable energy on mainland France between 2016 and 2023.

Target capacities for multiple renewable technologies are specified for 2018; alongside high and low scenarios for installed capacity in 2023.

The two 2023 scenarios are illustrated in the graphic below, with low scenario represented by the inner ring, and the high scenario by the outer ring.

For sake of comparison, France’s renewable energy mix at the end of 2015 is also provided further down. 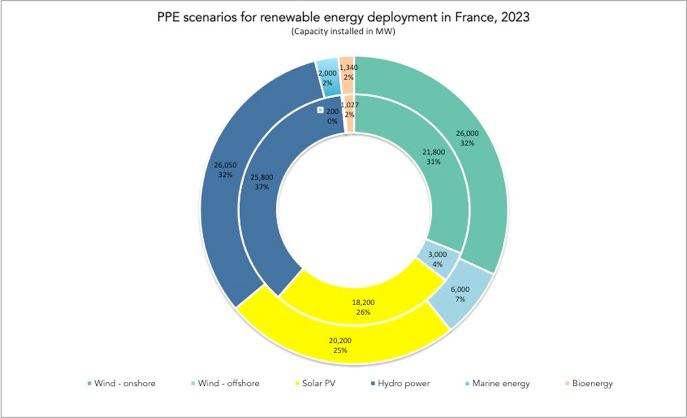 ‘Bioenergy’ reflects only PPE targets for increased wood- and biogas-fired power plant capacity combined. France actually already generates a larger amount of power from bioenergy than forecast by the PPE targets, when accumulating all forms of bioenergy production (which the PPE does not). Data legifrance.gouv.fr. 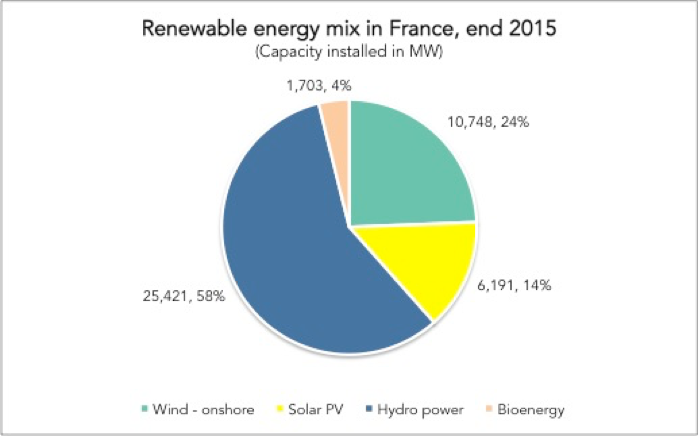 The PPE targets imply total renewable energy capacity of 69,980 MW in the low scenario, and 76,743 MW in the high scenario by 2023; delivering 150 and 167 TWh renewably sourced electricity per year respectively.

He continued: “Our only regret is the weak target for offshore wind despite economic progress. Otherwise, for all technologies, PPE gives a clear and ambitious vision of RES development.”

Providing context in regards to how the trajectories build upon recent momentum for renewables development in France, Mathon said: “For solar and onshore wind energy, the PPE targets are going to double the current rhythm [annual rate of installation]. For instance, for solar from 1000 to 2000 MW, and for onshore wind from 1000 to 1800 MW.”

Indeed, strong year on year growth of renewables was reported at the end of 2015: compared to 2014, installation of new wind power and solar PV capacity increased 23.3 percent and 25 percent.

With renewable capacity ably expanding in recent years, the PPE scenarios are roundly expected to add to investor and developer confidence that France will remain an attractive country for new capacity going into the next decade.

Alongside goals for enhanced electrification, continued demand for renewable energy in France is expected to be secured by national policy to reduce the share of nuclear power in electricity production from about 75 percent to 50 percent by 2025.

Good news aside, the targets have left the wind industry wanting in some respects.

Matthieu Monnier, Industry and Offshore Wind Advisor for the national wind association (France Wind Energy) told Renewable Energy World: “We warmly welcomed the PPE targets for onshore wind power. It gives a true visibility for the industry and shows the state’s ambition for renewables regarding the energy transition law.”

Monnier calls for “stronger support” for offshore fixed-bottom wind projects. He continued, “The given visibility could have been higher; between 0.5 and 6 GW [of] additional capacities awarded by 2023 [is] quite unclear — we don’t know how much [capacity] we can expect in a near future.”

He added that France Wind Energy suggested that the state set up a clear plan with tenders and dates, as in Germany and the Netherlands.

“That is a strong factor for costs reduction, and it gives visibility for new potential investors,” Monnier said.

Monnier added that the state should better support the offshore wind projects through reducing legal issues and simplifying administrative requirements.

“A ‘de-risking’ process (of wind measures, geophysical, partial geotechnical and environmental surveys) and a complete permitting package before awards could, of course, boost and accelerate the development of the offshore wind energy, like in Denmark, the Netherlands,” he said.

Floating wind — for which there is potential and industry appetite in France — is bracketed under the auspices of marine energy, with even lower targets.

France Wind Energy has proposed a higher objective of between 12 GW and 15 GW fixed bottom and 6 GW floating offshore wind power by 2030.

While Mahon views the PPE trajectories as encouraging, he highlights that presently France is set to miss key national targets.

Mahon said: “We think that the current rhythm [should enable] 17 or 18 percent renewables in final consumption by 2020. But if 2020 targets are off, new targets for 2023 with good tools could be reached.”