More
Home Baseload Forget The Red-Blue Divide: When It Comes To Clean-Energy Deployment, Both Sides... 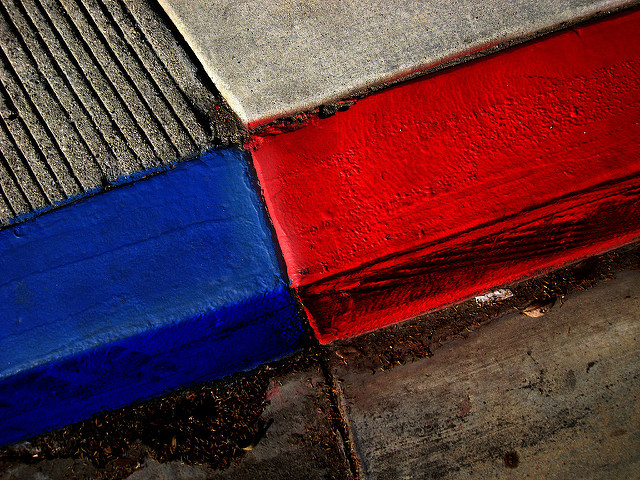 Clean Edge recently released its seventh annual U.S. Clean Tech Leadership Index, which tracks and ranks the clean-energy and clean-tech activities of all 50 states and the 50 largest metro areas in the U.S. The Index tracks everything from EV and renewables adoption to policy and investment activity. The latest edition comes at a time of notable acceleration in the nation’s transition to a clean-energy economy, where an increasing number of cities, states, and companies are raising their renewable energy targets, green buildings are becoming the standard, and energy storage and EVs are moving into the mainstream.

At the state level, the transition to a clean-energy economy over the past seven years has been remarkable. Fourteen states now exceed 10 percent in-state generation from non-hydro renewables (up from just one state in 2010). The top three states (Iowa, South Dakota, and Kansas) are at 31 percent, 25 percent, and 24 percent respectively. And it’s not just wind generation — in this year’s Index, California became the first state to generate 10 percent of its in-state electricity from utility-scale and distributed solar, with Hawaii not far behind at 7 percent.

This dramatic shift (more than 60 percent of all new U.S. electricity generating capacity additions last year came from solar and wind) represents both the maturation of the clean-energy sector and a deployment landscape that seemingly transcends politics. Among the Top 10 states for utility-scale clean-electricity generation (not including hydro), half were red states during the last presidential election (Idaho, Kansas, North Dakota, Oklahoma, and South Dakota) and half were blue states (California, Colorado, Iowa, Minnesota, and Vermont). 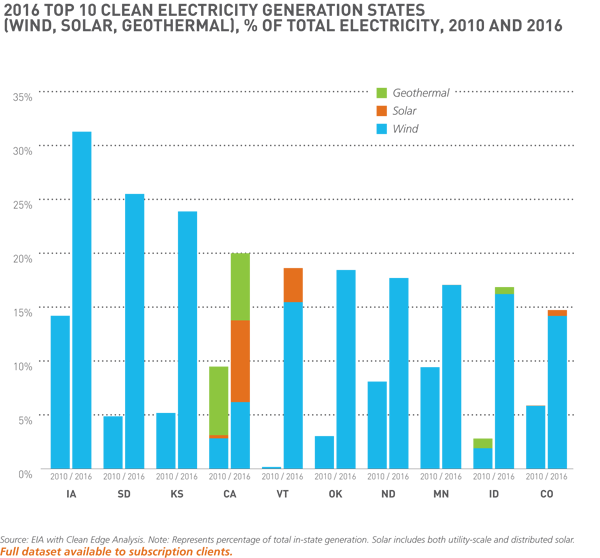 And it’s not just utility-scale renewables that pierce the myth of a red-blue divide when it comes to clean-energy deployment. This year’s Top 10 states for EV registrations include three red states (Arizona, Georgia, and Utah) and two that are purple (swing) states in the current election cycle (Colorado and Nevada). For smart meter penetration, red states represent half of the Top 10 spots: Nevada (96 percent), Maine (92 percent), Georgia (87 percent), Vermont (84 percent), California (82 percent), Arizona (74 percent), Alabama (72 percent), Idaho (71 percent), Texas (70 percent) and Delaware (70 percent). In some indicators, such as LEED green building deployment, coastal and left-leaning states dominate the Top 10, while in others, such as demand response peak demand shaved, more red states lead. 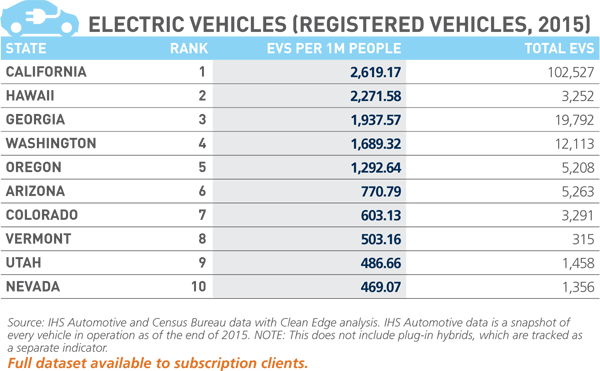 Of course, that doesn’t mean that things are evenly split across the board. Things look pretty blue when viewed through the larger lens of not just technology deployment, but policy initiatives and capital attraction (which includes venture capital raised by clean-tech companies, clean-energy patents awarded, and clean-tech workforce attained). Of the Top 10 overall states in the Index, all of them lean left politically and eight of them are coastal states.

Ever-progressive California leads all states in clean-tech leadership by a wide margin for the seventh consecutive year, followed by Massachusetts (#2). Vermont, home to self-described democratic socialist Bernie Sanders, is the big story of the top 10, with a three-place jump to #3, and up from just 19th in our first Index in 2010. Deep-green Oregon comes in fourth, with New York not far behind at #5. The rest of the top 10 (Colorado, Illinois, Connecticut, Washington, and Hawaii) is closely bunched; just 5.4 points separate the sixth- and 10th-place states. And the top 10 metro areas, not surprisingly, come from equally blue and progressive centers: San Francisco, San Jose, San Diego, Portland, OR, Washington, DC, Los Angeles, Boston, Seattle, Austin, and Chicago.

But, as we learned in our U.S. Homeowners on Clean Energy Survey conducted in 2015 with Zogby and SolarCity, it would be a mistake to paint clean energy the domain of a single political affiliation or demographic. When homeowners nationwide were asked to pick which specific energy sources were most important to the nation’s future, solar (50 percent) and wind (42 percent) led the pack, followed by natural gas (33 percent) and energy efficiency (25 percent). Lower in the rankings were one-time energy stalwarts nuclear power (14 percent) and coal (8 percent). Solar power was the top choice among all major demographic groups including Republicans, Democrats, Independents, conservatives, liberals, city and rural dwellers, youth, and the elderly, making Right-Left and Blue-Red delineations a fabrication. It seems that while we might disagree over climate change, most Americans prefer solar and wind farms to nuclear and coal-fired power plants.

Personally, I’m not looking forward to the heated and nasty rhetoric during this presidential election season. I expect it will be the worst, and most politically charged, election that many of us have witnessed. I also don’t hold out hope that Republicans at the federal level will suddenly embrace an energy future built on efficiency, renewables, energy storage, and a modernized grid.

But it’s important that we remind national politicians on both sides of the aisle that the American people, as well as Republican and Democratic leaders of many cities and states, don’t see clean energy as a point of contention or division, but instead are united in their support of a transition to a low-carbon future. Our clean-energy deployment numbers back that up quite nicely.