More
Home O&M Monitoring For the Birds: How Speculation Trumped Fact at Ivanpah

California, USA — With its claim of 28,000 dead birds from Ivanpah, the Associated Press syndicated a story on every front page in America, spreading alarm about concentrated solar power (CSP) plants, which was not grounded in facts, but on one opponent’s speculation.

In CSP power tower technology, sunlight is reflected off mirrors that are focused on a receiver atop a tower. This sunlight heats a fluid that can then be used to generate electricity via turbines and stored for later use, making CSP valuable as more renewables come online.

“Ivanpah reported 321 total avian fatalities between January and June 2014, of which 133 were related to sunlight being reflected onto the boilers, thus falling far short of the ‘estimates’ in the Associated Press article,” said Jeff Holland of NRG Energy, Ivanpah’s part owner with BrightSource Energy and Google.

“From the very beginning when we began developing Ivanpah, we have worked closely with state and federal agencies and all relevant stakeholders to optimize Ivanpah’s clean energy contributions while minimizing any environmental impact,” said Holland. 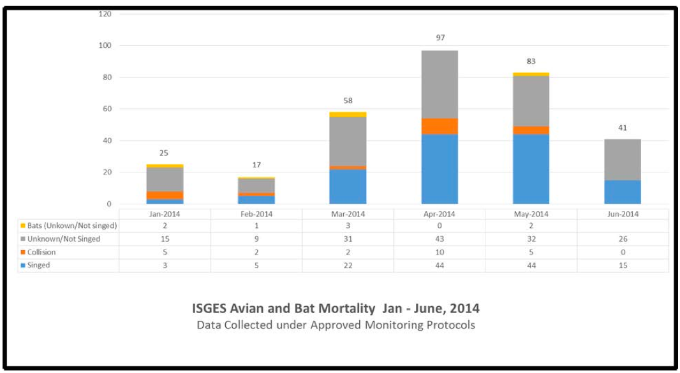 The Ivanpah numbers are hard counts, not speculations. Under rigorous oversight by the California Energy Commission (CEC), as part of the multiyear environmental permitting process that all CSP projects must go through in California, these counts are independently tallied by environmental experts.

During California’s permitting process for Palen, the Ivanpah owners engaged an independent environmental monitoring firm that searches for corpses to provide a reliable tally of avian mortality.

The CEC permits all thermal plants over 50 MW.  A glance through some of the 188 Ivanpah permitting documents (including many environmental surveys that are themselves 300 page pdfs) filed with the CEC gives an idea of just how exacting is their oversight of power tower CSP projects. SolarReserve’s Rice project took 165 permitting documents. For perspective, natural gas permits roll off the assembly line with under 35 filings.

At any one time, only a small percentage of mirrors must focus sunlight on the tower, and the rest are on standby until they’re needed to reflect sunlight.

Originally, standby mirrors were pointed near the tower, said Holland. But since June, when not in use, mirrors are aimed in scattered directions. Avian mortality is solvable, and is being solved.

Editor’s note: Look out for an in-depth feature story on solutions to avian mortality at CSP plants on RenewableEnergyWorld.com in the near future.