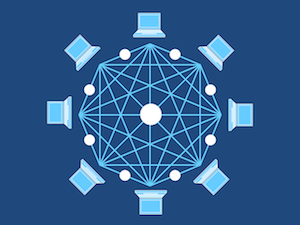 This article is part of a series of insights from leading smart-grid, clean-energy, and utility experts speaking at gridCONNEXT. Questions asked by Clean Edge managing director and gridCONNEXT co-chair Ron Pernick.

Ron Pernick: Blockchain seems to be everywhere these days. Not only is it the basis for cryptocurrencies like bitcoin, it’s now being touted as the next big thing in peer-to-peer transactions for shopping, government services, and more. Where do you see the greatest opportunity for blockchain in the energy sector?

Jon Creyts: In the near-term, blockchain will quickly help solve trust and integrity issues in markets managed by accounting intermediaries. A great example is the “certificates of origin” market that includes products like unbundled renewable energy certificates. The current system is plagued by high transaction costs, data handoffs, lengthy settlement times, and market opacity, all of which make it hard for buyers to get the attributes they want, and for generators to authenticate sales. These shortcomings can be remedied by a centralized blockchain ledger that incorporates creation, ownership transfer, and retirement into a single, robust data system that is cheap to manage, easily accessible, and cyber-secure.

In the long-term, blockchain automation in peer-to-peer energy trading and dispatch will transform the sector. Using smart contracts, blockchain will be able to clear physical and financial markets at the same time, automating dispatch of load, generation, and storage from both ends of the grid.  Expect blockchain applications to be integrated into EV charging infrastructure in the near-term (they already are used in the Share & Charge network in Europe). Demand response, wholesale market trading, and eventually fully distributed resource market automation will follow. And the changes here are happening fast: blockchain is advancing at the speed of software development, not infrastructure deployment.

Pernick: In November, your organization, the Energy Web Foundation, granted public access to its new test blockchain network so startups, corporations, developers, and others could start developing what you call “energy Dapps.” Can you briefly tell us more about this project and what you hope it will achieve?

Creyts: The Energy Web Foundation is a non-profit committed to developing a global, open-source, cryptographically secure blockchain platform specifically tailored to the needs of the electricity grid. Think of it as a “Linux-like” backbone for energy applications. Our goal is to help standardize the core technology and promote awareness of its ability to solve issues related to operating an increasingly distributed and renewable grid. Programmers can develop distributed applications, or Dapps, on this platform that automate key market opportunities, like creating the certificates of origin market, demand response automation system, or a billing and settlement applications mentioned previously. The Foundation is developing this backbone with input from leading global energy companies like Shell, Engie, Singapore Power, and Sempra working alongside innovative software developers like Parity Technologies, Brainbot, and Slock.it to build a durable and tailored system that specifically addresses the regulatory demands of the energy sector, while supporting an ecosystem of innovation among startups and application developers.

Pernick: In a peer-to-peer network, where multiple parties produce and sell/exchange energy (for example, from solar modules on a rooftop), what is the exact role of the utility? How do you envision the utility being compensated for its role (assuming the electricity is being transmitted across a utility-owned asset)?

Creyts: We think utilities will continue to play a vital role in maintaining, managing, and balancing the grid. In fact, our blockchain uses a special consensus approach that ensures both utilities and regulators are actively validating transactions and verifying that commercial activity is fully compliant to the rules of the market. The utilities will receive compensation for providing the computational power to check and clear this market, at the same time that they also earn on the wires, generation, and other assets they own and operate in the system. The central grid will still be essential in a blockchain-enabled world, we just envision that its capital efficiency will improve dramatically, and that utilities will help make that happen by adjusting and managing a different composite mix of assets to deliver lower cost, more reliable, more resilient, and cleaner energy services.

Pernick: Why should people trust the security claims of blockchain proponents? Personally, with all the cyber intrusions we’ve seen in a range of industries (from credit rating services to major retailers), I’m a bit skeptical. Why should blockchain be any different?

Creyts: Blockchain as a technology contains some of the most secure algorithms protecting data that yet exist, and its public ledger creates a traceable history of actions that cannot be manipulated. That said, every data system has the potential to be corrupted at interfaces with humans and/or devices. This is the reality of living in a digital age. We are trying to combat both by having robust handshake protocols, automated cross-checks, and by adopting an open-source development process where programmers are incentivized to deliberately try to break the system before it ever goes live publicly. Through such approaches, a blockchain enabled network will be considerably more secure than the state-of-the-art systems controlling today’s grid.

Creyts: The idea of using a distributed computer with replicated ledgers, while a robust way to maintain data, comes at the expense of speed. It can also lead to sizable network energy consumption, as we have seen in the case of bitcoin. We are working hard to remedy these limitations through a smarter code design purposefully fit to the energy sector. Our design uses a limited set of authorities to approve transactions (including regulators, utilities, and other trustworthy sources) who act as the validators of the blockchain. Restricting replication of the ledger allows our current blockchain to run at approximately 7,500 transactions per second, with a technical development pathway intact that we believe will surpass the million transactions per second hurdle over the coming year.  This is the threshold we consider necessary to animate an “internet of things” electricity market. Hence, while the technology is still early, we see clear promise that this and similar constraints will quickly fall away in the months to come. Blockchain is an important disruptive technology that every regulator and utility executive should be tracking. Doubtless its pace of progress will surprise us all.

Jon Creyts was a panelist at gridCONNEXT 2017 in Washington, D.C. For more information about gridCONNEXT, visit www.gridconnext.com.