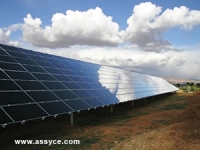 What’s going on at First Solar? The company, a pillar of the solar industry, on Tuesday announced what seemed an abrupt departure of its CEO, Robert Gillette, and the return of its former chief executive, Mike Ahearn, during a time when the company and the rest of the industry are dealing with a market marked by an oversupply of solar panels and plummeting prices.

The Arizona thin-film maker is mum about the reason for Gillette’s leaving, which is “effective immediately.” A spokesman said the company will not be talking about the change of leadership until the earnings call next week.

Gillette became the CEO in October 2009 after spending four and a half years as CEO of Honeywell Aerospace. Ahearn then stepped down from the CEO post after spending nearly 10 years building First Solar into a successful public company. When he left, First Solar was moving up in sales and profits, and it had entered the project development business in earnest with the $400 million purchase of OptiSolar’s unfinished projects in early 2009.

Last year was a good one for First Solar, too, though the company knew it couldn’t depend on Germany — and by extension Europe — as its chief market for too long. We started to hear more about the company’s solar panel sales agreements in India, for example, and a deal to sell panels and act as a general contractor for a 10-megawatt project in Australia. The company headed into 2011 with a cheerful forecast.

But 2011 so far is turning out to be an awful year for First Solar and the industry overall. The falling incentives in Germany, Italy and France — and the delay by project developers to complete projects — have led to several gigawatts of solar panel inventories industrywide and crashing prices. First Solar has experienced huge drops in earnings this year. Gillette told investors in August that there should be a rebound in the second half of 2011.

But the big drop in silicon solar panel prices — between 30 and 40 percent so far this year — presents a growing threat to First Solar’s advantage as a low-cost solar panel maker. First Solar uses cadmium-telluride instead of silicon for its solar panels.

The company initially won promises of federal loan guarantees for four of its U.S. solar farm projects, but lost the one that would have guaranteed a bulk of a $1.9 billion project in California called Topaz Solar Farm. It was able to finalize the loan guarantees for three other projects and sell them to utilities and other investors.

First Solar needs to find a buyer for the 550-megawatt Topaz project, and that has proven a rather difficult task. A report emerged Monday that a potential buyer, Enbridge, backed out of the deal.

Meanwhile, some of First Solar’s top executives have left this year. Former president of operations, Bruce Sohn, left to head an energy storage company called Fluidic Energy. Jens Meyerhoff, who was the CFO and then the head of the project development business unit, recently departed as well.

Ahearn’s return is only temporary. The company said it has formed a search committee to look for a permanet chief executive. Ahearn has become an investor and launched a $300 million greentech fund earlier this year. He told the Wall Street Journal that he wouldn’t be investing in the photovoltaic industry.