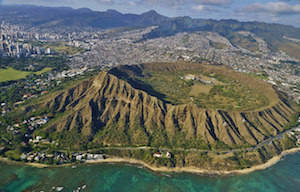 Grid operators on the islands of O’ahu and Puerto Rico are working with advanced software providers to help them understand how their transmission and distribution systems function with increasing amounts of distributed energy resources (DER), as they seek a cleaner, more resilient power infrastructure.

Hawaiian Electric Co. on April 18 said it will collaborate with Toronto, Ontario-based Opus One Solutions to integrate and manage increasing levels of customer energy resources on the O’ahu grid.

According to the companies, Opus One’s GridOS Dynamic Hosting Capacity software will help Hawaiian Electric system operators understand the level of DERs that can be accommodated on a feeder line in near real-time to optimize grid assets and DERs, while maintaining reliable service.

“Opus One Solutions reduces the need for significant infrastructure upgrades by leveraging the value of DERs to the grid, while also accommodating the interest for increased DER penetration,” Joshua Wong, president and CEO of Opus One, said in a statement.

In Puerto Rico, where full power has not been restored since hurricanes hit the main island in September 2017, Puerto Rico Electric Power Authority (PREPA) will get help from software that simulates large-scale DER integration in an effort to modernize its grid.

PREPA on April 17 entered into a memorandum of understanding with the New York State Smart Grid Consortium (NYSSGC) and ProsumerGrid, Inc., to assist with Puerto Rico’s long-term grid planning efforts.

“Redesigning and modernizing Puerto Rico’s electric system will go well beyond rebuilding the previously existing grid infrastructure or randomly adding more renewable resources,” Jim Gallagher, executive director of NYSSGC, said. “There are a number of complex and structural issues that must be addressed to support strategic resiliency, economic, and environmental objectives.

Atlanta-based ProsumerGrid said it will use its Distributed System Operator (DSO) Simulation Studio to provide integrated simulation capabilities for the island transmission and distribution system with large amounts of DERs and smart grid subsystems, such as microgrids, aggregators, and consumers who both produce and consume energy.