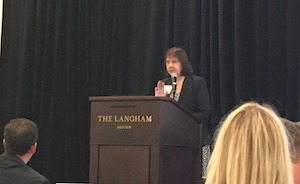 On Friday at the Pierce Atwood Energy Infrastructure Symposium, keynote speaker and FERC commissioner Cheryl LaFleur offered insight into how she would be considering the recently proposed rulemaking (NOPR) that the secretary of Energy issued last month.

She explained how she approaches any new proposed rule by considering the customers.

“We have to be very certain — based on data — that the customers need it. That there is a demonstrated problem that we are solving in the market,” she explained. Second, the rule has to be defined in a fuel-neutral way and third, it has to be capable of being transparently priced in the market.

LaFleur then gave three examples of how the markets responded to rule-making in the past, pointing to a ramping tariff that was needed by the California ISO and the Midcontinent ISO in order the respond to great quantities of wind, solar and hydro.

“We needed to be able to deal with things that come up fast when we need them,” she said. So FERC ruled that those markets would “pay extra for ramp,” she said.

“And so, they defined the attribute, then they priced it, then they went out and bought it in the market from any technology that could provide it.”

She also pointed to capacity markets rule in PJM, which came about in response to the polar vortex and winter reliability issues. This rule essentially paid more for services that could be counted on when “the system was most in need,” she said. LaFleur explained that this rule was considered quite important to baseload energy resources at the time (in 2014) but said that now that the market has adjusted “it hasn’t yielded as much revenue as expected.

“Another way to say it is that people figured out a way to do it cheaper than people thought it would cost,” she said.

And then there is a carbon. The Regional Greenhouse Gas Initiative (RGGI) in the northeast prices carbon and LaFleur said the New York ISO has proposals regarding carbon pricing.

“Essential reliability services, voltage support, all those boring things we used to take for granted that the market can price, I think they are very able to be priced in the market,” she said.

The difference with the recent NOPR is that starts with a resource, not an attribute, said LaFleur, which makes her skeptical.

“In all of those cases you start with an attribute and then use the market to price. What I am skeptical of is starting with a resource and then pricing around that,” she said.

Comments are due today, Monday Oct. 23 and LaFleur believes that FERC will receive “a slew of them on both sides” of the issue. One of the questions that FERC asked for comments about was whether people have other ideas for resilience and what else the commission should consider.

Regardless of the outcome of this rule making (FERC has to rule by Dec. 11), LaFleur believes this will be an ongoing conversation for a long time and urges energy industry stakeholders to stay tuned.

“I would be alert to what comes next,” she said, adding the PJM is talking about changing the way it does energy pricing.

“There are other solutions out there and you should just be alert to the discussion,” she said.