Iowa, USA — “Once, we all lived off the land, sun, wind and water and it provided everything we needed,” said DSM CEO Feike Sijbesma, surveying a crowd of more than 2,000 crowding a biomass storage facility in Emmetsburg, Iowa — converted temporarily into the world capital of advanced biofuels. “Then came our historic shift to a dependence on, and an addiction to, fossil fuel resources.” 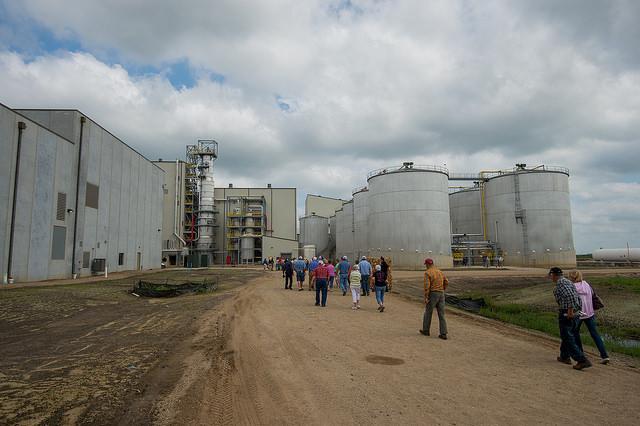 And so, the opening of the POET-DSM plant was underway, complete with a light show, royalty, corporate chieftains, a cabinet secretary, a former NATO commander, and a governor.

It was billed as a “grand opening” and biofuels has never had a grander stage. But Sijbesma avoided the temptation to mark a corporate milestone. He was there to tell a story.

“The world will run out of fossil fuels, it is inevitable. we just don’t know when,” he continued. “Meanwhile, our energy needs will grow, and one day $100 oil will seem cheap. And the climate is changing, the consumption of fossil fuels is driving drastic changes.

“We don’t need to wait until we run out. The Stone Age didn’t end because we ran out of stones, but because better technology became available. The first pioneers came to Iowa dreaming of a better life. As pioneers of today, we stand on their shoulders as we bring this new technology.”

POET chairman Jeff Broin joined Sijbesma on stage, as a hush fell over the crowd and Broin related the story of POET and the army of naysayers encountered in the turbulent journey towards cleaner fuels.

They Called It Fantasy Fuel

“Three and a half hours northwest of here,” Broin recalled, “is the family farm where I grew up, and in Scotland, South Dakota my family bought a foreclosed small ethanol plant. Ever since then, I’ve spent a lot of time talking with farmers about renewable fuels. Some bought in to the vision, many thought we were crazy.

“When we turned to this venture, there were naysayers who said ‘you’ll never get enough biomass’ or ‘you’ll never be cost-competitive’. Some called it fantasy fuel. Today, it’s real.”

The crowd cheered, and Broin paused, before issuing a challenge.

“This marks the beginning, It’s the tip of the iceberg, the foundation for the impending transformation of our energy supply, from a fossil economy to a renewable economy. It may not be completed in our lifetime, but it will happen.” 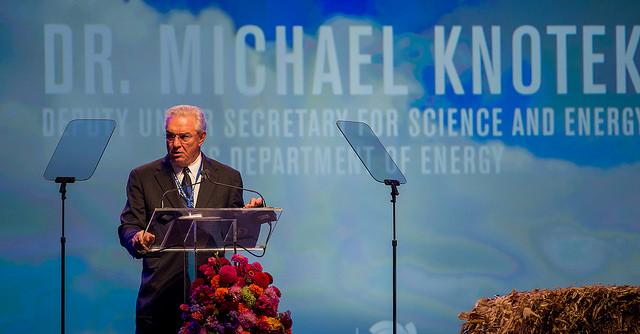 Deputy Undersecretary of Energy Dr. Michael Knotek then took the stage, and referred back to the fight for reduced emissions, and increased economic opportunity and energy security.

“Biofuels addresses all our challenges. Trust me, this plant is a big, big deal. We’ve invested for 30 to 40 years in these technologies, and we need 1000 of these. Lately, U.S. oil imports have fallen because of increased domestic production, but oil prices are still tied to a global market and our economy is tied to that volatility.”

Turning to climate change, Knoteck was direct: “Climate change is here, it’s real, its caused by humans, and we have to do something about it.”

Get the Product Out

U.S. Secretary of Agriculture Tom Vilsack was direct — but he refused to see a partisan divide over biofuels, seeing instead a geographic split. 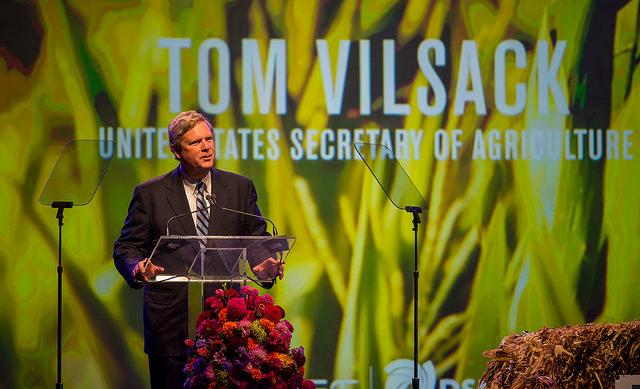 “It’s less Democrat Republican, and more geographic, though some Democrats do not understand the environmental efficiency of these fuels. We just need to get the product out.”

Iowa Governor Terry Brandstad agreed, saying ” If consumers have the access, they will purchase it. It’s not the time to backtrack on renewable fuels. It’s a win-win for Iowa and America.

Asked about the regional naysayers, Branstad pointed to disinformation. “People on the west and east coats are misled. The misinformation on the coasts is phenomenal. Just listen to CSPAN. We’ve got to fight that.”

“Our country fits three and one-half times in the state of Iowa”  remarked His Majesty King Willem-Alexander of the Netherlands. Yet we support 17 million people and, after the U.S., we are second in the world in agricultural exports. From that very small place on the North Sea, we are capable of something because of innovation, innovation, innovation.” 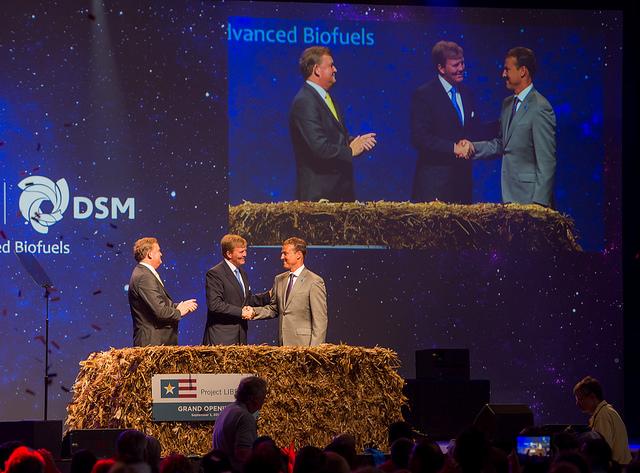 Nothing Will Stand in Your Way

Broin added: “I have a firm belief that farming is the noblest profession. We have been called to this, we have been given a great opportunity to change history. It is my belief that hundreds of years from now it will be said that these people, in a small town in Iowa, changed the world.”

Find out more about the plant and the cellulosic technology on the next page.

“I am very happy for POET-DSM,” Beta Renewables CEO Guido Ghisolfi told The Digest. “Look at the landscape now. You have four big companies — in fact, ours, a $3 billion company, is the smallest. And they have all chosen the enzymatic conversion pathway, and that is the clear winner now, we know that. Gasification and pyrolysis are very interesting technologies but they have proven very, very tough to master at the kinds of costs and timelines that are needed right now.

“Another thing. It tells you something about dirty biomass. You know, most of us like DuPont and Abengoa and ourselves and POPET-DSM, we’ve been in the business of chemical conversion for years — but we’ve been using in-spec materials. When you are working with corn stover, wood chips, waste residues — you are dealing with a very, very wide spec. No two bales are the same, and the differences can be considerable. Think of just the rocks, and dirt that are bound to get swept up with the stover when you recover it from the field.

Working with that material is tough. Not just because it is new — cellulose and so on. But because it is not in spec, not even close. Enzymatic conversion is going to get better over time, but it is the one technology that we know can handle these variances effectively.”

“Other states, including Illinois, Florida, Mississippi, Nebraska, and Kansas, will soon have cellulosic plants,” said Illinois Governor Pat Quinn, the Governors’ Biofuels Coalition chairman, “and plans are underway for additional plants in more than 20 states.

“Cellulosic ethanol production can make our agricultural system more resilient and sustainable while reducing our dependence on foreign oil. Experts in Illinois and Iowa are hard at work making that happen, and Poet-DSM is a great step toward achieving that,” Governor Quinn added.

BIO President & CEO Jim Greenwood stated, “The advanced biofuel industry is right now commissioning and starting up first-of-a-kind cellulosic biofuel plants, creating new jobs and putting innovative new technology into action, thanks to the Renewable Fuel Standard. Project Liberty is the realization of nearly a decade of research and development, and we congratulate POET-DSM and its employees on this achievement.”

“We should not forget that the Renewable Fuels Standards (RFS) is enabling U.S. biofuels innovation and commercialization and the dedication of this new biorefinery underscores the significance and efficacy of this important public policy,” said Brent Erickson BIO’s Executive Vice President.

The Plant by the Numbers

It’s a traditional corn ethanol plant with a cellulosic bolt-on, that boosts overall capacity by 20 percent. Known as Project LIBERTY, it will produce 20 million gallons of cellulosic biofuel per year — later ramping up to 25 million gallons — from corn cobs, leaves, husk and some stalk.

“Removing approximately one ton of biomass out of the average 4.26 tons available per acre,” POET has said, “will not require any drastic changes in fertilizer management for producers choosing to participate in the program.

In 2012, POET teamed with Dutch-based Royal DSM to create a 50/50 joint venture called Poet-DSM Advanced Biofuels that will produce cellulosic ethanol and license the technology to other plants in the U.S. and globally. DSM and POET each hold a 50% share in the joint venture, which will be headquartered in Sioux Falls, South Dakota. The initial capital expenditure by the joint venture in Project Liberty will amount to about $250 million.

The two partners will produce cellulosic ethanol from corn crop residue using enzymatic hydrolysis followed by fermentation. The initial capacity is expected to be 20 million gallons in the first year, growing to approximately 25 million gallons per year.

For now, said POET CEO Jeff Broin, the company will focus on corn cobs and stover, although it may undertake work on other feedstocks at a later time. For now, then, the scope of the venture is essentially limited to the US corn ethanol fleet of around 180 facilities, and a handful of other production sites in Canada and elsewhere around the world.

In 2010, POET outlined its plans to produce up to 3.5 billion gallons of cellulosic ethanol by 2022 in a presentation at the National Press Club. This plan included:

The U.S. Environmental Protection Agency (EPA) and USDA have estimated that as many as 350-400 new bio-refineries will have to be constructed by 2022 to meet the volume requirement of 16 billion gallons/year of cellulosic bio-ethanol under the RFS. The proposed added capacity would account for 20 percent of the cellulosic ethanol required by 2022 in the Renewable Fuel Standard.

However, POET Chairman Jeff Broin said that the time hat the US government had to provide the access to market and policy stability needed to attract the necessary financing for new facility construction.

In a press conference in 2012, POET CEO Jeff Broin said that the company cost of ethanol production was below $3 per gallon but did not elaborate further. in November 2009, the company projected a per-gallon cost of $2.35 at scale, down from $4.13 in late  2008. The company had said at the time that it expects to reach its $2 per gallon goal by the time the Project LIBERTY plant opens.

US Secretary of Agriculture Tom Vilsack summed it up best:

“Emmetsburg has been known as a great community with great progress. But today it changes. Today it becomes the capital of the advanced biofuel world. Today it welcomes the world to a new energy future. Now I know there may some skeptics out there who may be asking the question is cellulsosic ethanol for real. Can it be commercially produced. Well I say, come to Emmetsburg.”