Faced with level restrictions in the reservoir, the El Dorado Irrigation District commissioned a study of its El Dorado Forebay Dam to gain back lost generation from the 20-MW powerhouse. Results indicated a 10-foot raise could increase average annual revenue by 5.7% and emergency water supply by 18 times.

By Nicholas Miller and Jake Eymann

Restrictions were imposed on the reservoir level at the El Dorado Forebay Dam, an offstream reservoir in California, in 2009 because the factor of safety for the downstream embankment slope and existing freeboard are considered inadequate by the California Division of Safety of Dams (DSOD) and Federal Energy Regulatory Commission (FERC). The dam impounds water for a 20-MW powerhouse.

El Dorado Irrigation District (EID) knew that to bring the dam to a safe condition, a significant buttress and 3-foot dam raise would be required, at significant expense. It is important to improve safety for the downstream population, but it would not provide any tangible benefit to EID customers. Additionally, expensive dredging was imminent to maintain current operations. So, EID commissioned an evaluation to determine the financial implications and impacts to emergency water supply of various remediation and dam raise options. EID, in consultation with GEI Consultants Inc., identified four alternatives that satisfied all DSOD and FERC requirements, in ascending order of capital cost:

– Minimum modifications to meet regulatory requirements (no crest raise, a stability buttress, and the reservoir restriction stays in place).

– Raise the crest 3 feet. The spillway remains at the existing elevation and flashboards increase storage capacity from 311 acre-feet to 378 acre-feet, restoring the pre-restriction maximum reservoir operating elevation and bringing the dam into full compliance with regulatory freeboard requirements.

– Raise the crest 10 feet. The reservoir operating capacity is increased about 77% to 550 acre-feet with 3 feet of flashboards in place. The spillway will be modified and raised.

– Raise the crest 20 feet. The reservoir operating capacity is more than doubled to 825 acre-feet with 4 feet of flashboard. A new spillway will be designed for this alternative. 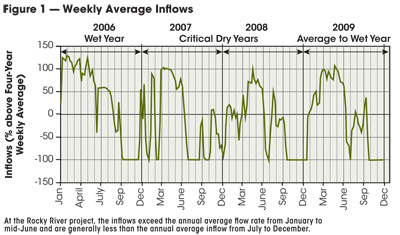 At EID’s request, GEI developed a hydropower simulation and optimization tool to evaluate the impacts of the four options on annual hydropower revenue and to provide a daily power scheduling tool for EID operators to maximize revenue. The evaluation revealed that the storage resulting from a 10-foot raise could increase average annual revenue 5.7% over the restricted operating conditions. Furthermore, a 20-foot dam raise provides only minor incremental increase in annual revenues over the 10-foot raise because of limited available water supply to meet the storage capacity.

Forebay Dam was built in 1923 as a homogeneous, compacted, earthfill embankment on a foundation of weathered phyllites and meta-sandstones. The dam is 91 feet high and 836 feet long, with a 15-foot-wide crest. The upstream slope is 3 horizontal:1 vertical (3H:1V), and the downstream slope is 2.5H:1V. 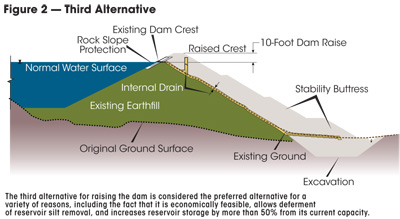 DSOD and FERC reviewed stability evaluation reports generated from 1997 through 2008 by Pacific Gas and Electric Co. (the previous project owner) and EID and concluded that interim risk reduction measures were required to ensure the dam’s safe long-term performance. FERC imposed the interim measures of limiting the maximum operating water level to the fixed spillway crest, which corresponds to a 3-foot reservoir water surface restriction.

DSOD also judged that the existing freeboard is inadequate, the dam is marginally stable for seismic conditions, and the minimum required factors of safety for downstream embankment slope stability are not met for the static condition. DSOD determined that EID must develop and submit a plan and schedule to improve overall stability of the dam and, until further notice, restricted the maximum reservoir operating surface to the fixed spillway crest. 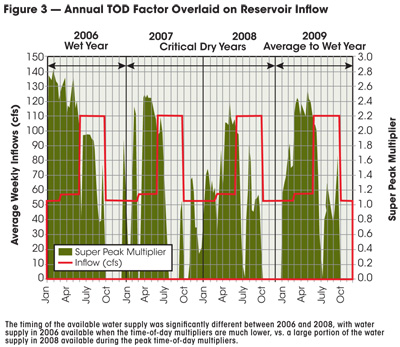 GEI and EID considered many rehabilitation and embankment configuration alternatives in 2009. Four concepts (listed above) were developed on the basis of materials availability, constructability, economics, and satisfying the FERC and DSOD stability and freeboard requirements. The first alternative was not desirable because it limits domestic water supply and hydropower operations and reliability. The other three alternatives were all considered feasible with respect to domestic water supply and hydro operations.

EID asked GEI to develop a tool to evaluate the financial impacts of each alternative on annual hydropower revenues and provide the operators with a user-friendly way to analyze hourly hydropower operations that maximize revenues.

HSOT was adjusted to allow continuous simulations for a four-year period. EID provided historical hydro operations data, which included hourly power production for each turbine from January 2006 to December 2009. While significantly longer period of record data was available, the project license issued in 2006 materially affected reservoir target levels and instream flow requirements and was the most representative data set of future water supply expectations. The selected period captures wet, dry and average streamflow years. Weekly average inflow to the powerhouse was about 62 cfs, with a maximum of about 141 cfs and minimum of 0 cfs. Upon review, generally inflows exceed the annual average flow rate from January to mid-June, and from July to December flow rates are generally less than the annual average inflow (see Figure 1). Average annual inflow volumes ranged from a low of about 36,400 acre-feet (in 2008) to a maximum of about 58,300 acre-feet (in 2006).

The historical flow rates were used to simulate hydropower operations under the proposed reservoir operating scenarios and the available storage to optimize hydropower generation. The resulting energy production and revenues were compared for the various alternatives. To prevent unplanned reservoir releases in the event a unit trips off, an additional 3 feet of emergency storage is provided in all alternatives.

The first scenario evaluated was accepting the FERC and DSOD restricted operating levels. The reservoir restrictions result in annual revenues decreasing by $100,000 to $138,000, or an average of 1.6%, relative to the second alternative.

The second alternative is reasonable considering cost, revenue and time to repay the investment. However, it is not beneficial over the project life due to reservoir sedimentation issues and storage limitations that do not allow weekly optimization of hydropower operations.

To evaluate the benefits of the additional storage capacity provided by the third and fourth alternatives, GEI simulated hydro operations to estimate the energy production and revenues generated. The 10-foot raise increases annual hydro revenue of $210,000 to almost $500,000, or an average of 4.1%, relative to the second alternative. This increase is due to the greater operational flexibility provided by the additional storage capacity, which allows the reservoir to be operated on a weekly schedule. This produces larger reservoir pool level fluctuations and utilizes more of the available reservoir storage capacity during the higher price periods while maintaining the storage needed for domestic supply in the case on an inflow outage.

The third alternative is economically feasible; allows deferment of reservoir silt removal; increases storage by 164 acre-feet (over 50% of the current capacity); represents a greater improvement to the longevity of the project; and is considered the preferred alternative (see Figure 2).

The fourth alternative provides only minor incremental increase in annual revenues over the 10-foot raise due to the limited available water supply and resulting narrow band of reservoir pool fluctuation produced during weekly optimization. Therefore, the full storage capacity is not utilized. The incremental increases in annual revenues for the 20-foot raise relative to the 10-foot raise are more during the wetter years. This demonstrates that there may not consistently be sufficient excess inflow, relative to the turbine capacities, to fully utilize the additional storage provided by the 20-foot raise.

An additional task of this study was to estimate the financial benefits resulting removing some of the estimated 170,000 acre-feet of sediment in the reservoir. Enough sediment would be removed to allow the reservoir to be drawn down an additional 1.7 feet, which provides about 30 acre-feet of storage. Removing the sediment does not increase annual revenues because optimizing hydro operations on a daily schedule does not produce reservoir level fluctuations significant enough to lower the reservoir water surface elevation below the existing minimum pool. If reservoir operations were optimized on a weekly schedule, there is potential to draw down the reservoir below the minimum during the week, but the increase in monetary benefits would likely be minimal.

Operating the reservoir under these conditions could adversely impact the ability to supply downstream domestic demands. EID recommended that reservoir hydro operations be optimized on a daily schedule to minimize the domestic supply risk and limit reservoir fluctuations. Based on these results and the operating conditions developed for the second alternative, no hydropower benefits are produced by removing the existing sediment.

Thus, a large portion of the 2006 revenues are produced during the lower peak pricing income. This skews the average annual power generation and income ratio downward, resulting in a ratio that is much lower than in 2008.

The third alternative (10-foot raise) addresses all dam safety deficiencies and represents a technically and cost-effective solution to meet EID’s energy production and water supply requirements. The estimated cost is $18 million. The environmental impact report was certified March 24. The FERC license amendment process is expected to be complete in 2015, with construction beginning in late summer 2015 and final by the end of 2016.

HSOT was developed for a single project application; however, the model could be expanded to simulate larger hydro systems. HSOT can be used as a tool for daily or weekly load shaping to simulate continuous flows events and various operating scenarios. This type of optimization model can provide water managers and system operators a tool that quickly presents the information needed to support water resources and operational decisions.