Fiercely competitive, the famed crucible of motorsport is to be the high-tech proving ground for an advanced generation of electric vehicle technologies through the new Formula E race series, using exclusively electric drivetrains.

Backed by the Federation Internationale de l’Automobile (FIA) – the governing body behind Formula 1 – the open championship will give automotive manufacturers and constructors the opportunity to showcase their EV innovations in a racing environment, simultaneously serving as a focal point for EV R&D.

This is a significant development and follows on from the use of Kinetic Energy Recovery Systems (KERS) – used to recover braking energy and deliver that as an 80 bhp power boost for overtaking or other tactical acceleration – in the world’s primary formula race series. For this 2013 season, all of the 11 teams are using KERS based on motor/generator and battery technology, though mechanical and hydraulic systems are also permitted.

For the new Formula E series, London, Rome, Los Angeles, Beijing and Rio de Janeiro are among the cities already named as venues for the street circuit races, which are scheduled to begin next September and run through to June 2015.

In launching the new racing platform it is hoped that at least some of the glamour, prestige and above all investment associated with competitive motor sport will rub off on the EV sector. Furthermore, this investment coupled with a competitive spirit will inevitably see some of the technologies developed eventually winding up in domestic vehicles, something that has been seen throughout the history of motor racing.

According to the organisers, the championship centres around three core values of energy, environment and entertainment, combining to drive the change towards an electric future.

“We expect this championship to become the framework for research and development around the electric car, a key element for the future of our cities,” said Alejandro Agag, CEO of Formula E Holdings, the company appointed last August as official promoter of the championship.

Agag added: “Formula E wants to show that electric cars are fast, reliable and safe. Our mission is to establish electric cars as a real option for people’s daily lives, one that will make our cities cleaner and more liveable.”

So far only one manufacturer has had a vehicle homologated by the FIA for the competition, the Spark-Renault SRT-01E. Built by new French company Spark Racing Technology, the car already boasts contributions from the stellar names of Formula one with a chassis coming from Italian firm Dallara, the electric powertrain and electronics from McLaren Electronics Systems, and Williams Advanced Engineering supplying the lithium-based batteries. 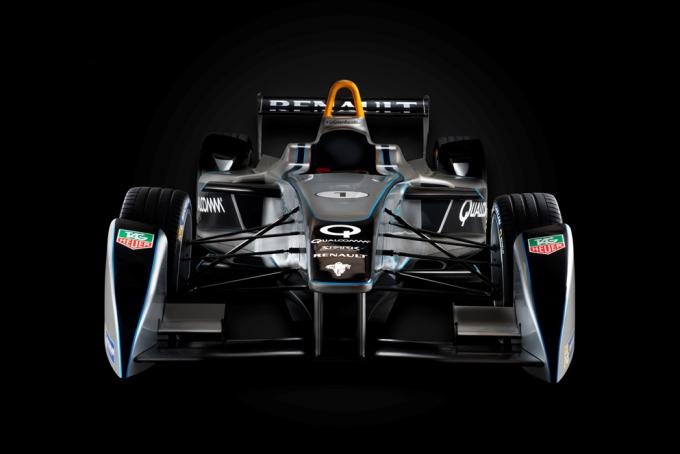 Engines will be restricted to 133 kW or 180 bhp for most of the time, but similar to its F1 cousin, a boost system can bump this up to a maximum power of 200 kW or 270bhp. And while this isn’t supercar levels of power, it is a more than respectable number, being similar to a typical sporty saloon.

A mark of the FIA’s commitment to the project came last November, when Formula E Holdings announced the purchase of 42 Spark-Renault SRT-01E cars that will be used in the inaugural race, four for each of the 10 teams.

That gamble may pay off though, the play is already attracting interest from the high-tech sector, with recent news that mobile phone chipset company Qualcomm Inc has reportedly signed a five-year sponsorship deal to become founding technology partner.  As part of the arrangement, Qualcomm will use its Wireless Electric Vehicle Charging (WEVC) resonant magnetic induction technology in the 2014-2015 safety cars while the wireless charging system will be made available to the race cars from season two.

Paul Jacobs, Chairman and CEO of Qualcomm described the collaboration as a great opportunity to “evaluate and improve wireless connectivity and EV technology across the globe, especially in the host cities”.

Even more recently Qualcomm licensed its wireless EV charging system to Drayson Racing Technologies (DRT), enabling the company to make and supply products including WEVC to the motorsport and automotive sectors.

Drayson Racing plans to build its own machine for the 2015 Formula E competition and has already been testing a specially developed 20 kW, high power wireless charging system on its prototype electric racing car, which only in June set a new Land Speed Record for a sub-1000 kg EV.  The car hit over 204 mph and beat the previous speed record — which had stood for close to 40 years — by nearly to 30 mph.

The glamorous, money-is-no-object world of motor racing seems a very long way away from most everyday lives. But by sharing its limelight with the EV sector, Formula E is injecting serious amounts of cool into addressing the challenge of a clean transportation system. That is perhaps the most critical element in achieving an everyday, but nonetheless wholly renewable, future.

Competitive motorsport is always a thrill ride, but there’s no doubt about it, this is the most exciting race of all.