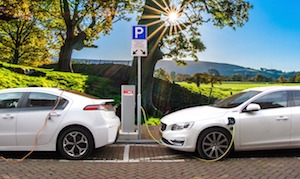 Data from the China Association of Automobile Manufacturers (CAAC) revealed that in May 2018, 96,000 electric vehicles (pure electrics and hybrids combined, comprising what the Chinese government and media refer to as “new energy vehicles”) rolled off assembly lines, while 102,000 units were sold, increases of 85.6 percent and 125.6 percent, respectively, over the same period last year. Production of pure electrics reached 77,000, while sales amounted to 82,000 units, increases of 75.9 percent and 112.8 percent year-on-year. Chinese automakers produced 19,000 plug-in hybrids and sold 20,000 units, up 138.8 percent and 196.8 percent.

For the five-month period, from January to May, both the production and sales of EVs reached 328,000 units, increases of 122.9 percent and 141.6 percent, respectively, year-on-year. Automakers produced and sold 250,000 pure electrics, increases of 105.1 percent and 124.7 percent. They manufactured 79,000 and sold 78,000 hybrids, up 207.3 percent and 218.4 percent. Based on these figures, China expects to achieve more than one million units in both production and sales of EVs for the full year of 2018, said Chen Shihua, Assistant General Secretary of CAAC.

The Chinese government plans to gradually reduce subsidies for EVs by 2020. The decline in subsidies and changes in policy are also challenging EV manufacturers. In 2017, the net profit of listed electric vehicle makers across the country was generally much lower than that of the previous year. Anhui Ankai Automobile, Haima Automobile, Beiqi Foton Motor, Zhongtong Bus, JAC and Great Wall Motor saw a year-on-year decline of more than 50 percent in net profit last year. Anhui Ankai Automobile and Haima Automobile suffered losses.

Since the beginning of 2018, China’s EV makers have maintained relatively solid growth, however, profits are expected to take a hit as subsidies drop.