With images of oily ruin from the Gulf of Mexico breaking our hearts and turning our stomachs and the car-driving world at the edge of an electric moment and a plug-in paradigm shift, more and more attention is on the batteries that will make or break this transportation revolution.

The lithium ion (Li-ion) battery is the state of the art. It is the safest, most energy-dense product the auto industry can find that is not so expensive as to make battery electric vehicles (BEVs) unaffordable. Yet it comes at quite a cost, perhaps $1,000 per kilowatt-hour. A potent battery pack can cost more than some economy vehicles. Carmakers would dearly love to find a way to beat that price burden.

Shai Agassi’s breathtakingly ambitious Better Place concept is surely the cleverest way around the cost of the battery so far devised. Better Place will sell cars but lease the batteries on cell phone-like usage plans. That, and the Better Place ambition to build an international chain of battery fast-switch stations, may facilitate a lot of electric vehicle sales but does not solve the battery’s price problem, it just shifts it to Agassi.

There is one great hope on the horizon. It would make a Li-ion BEV battery an investment of sorts. Agassi has mentioned the idea as a possibility on which his company’s financial viability could hinge.

Today’s Li-ion batteries are expected to last 8-to-10 years. At that point, they will no longer hold a full charge but will only be capable of about 80% of their nameplate storage capacity. As vehicle batteries, they will require replacement. But 80% storage capacity might be very, very useful to somebody – somebody who might pay for that storage capacity and, by giving the battery resale value, defray the high purchase price. ::continue:: 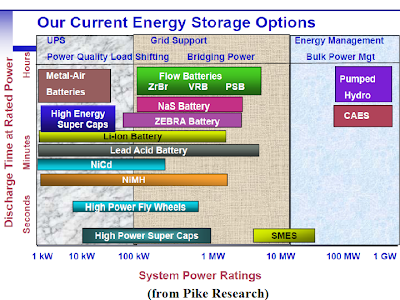 In PHEV/EV Li-Ion Battery Second-Use Project, Jeremy Neubauer and Ahmad Pesaran of the National Renewable Energy Laboratory (NREL) describe the experiment they are undertaking to see just how capable and valuable today’s lithium ion BEV batteries will be when they are done with their life in transportation and begin their second life in stationary storage.

If Neubauer and Pesaran prove the hypothesized potential to be real, it could represent not only a way to affordability for BEVs but the answer to New Energy’s hardest question: How can there be large-scale affordable storage?

In the foreseeable future, warehouses of second-hand Li-ion batteries could potentially be storage facilities into which solar arrays and power plants and wind installations drop excess and off-peak generation until grid managers need and call on it, giving second life to the batteries and much more life to the variable New Energies. 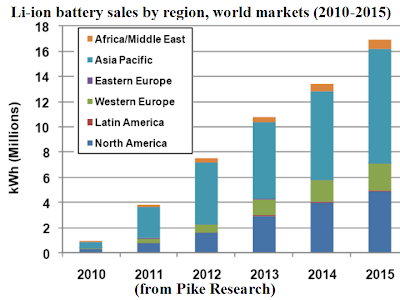