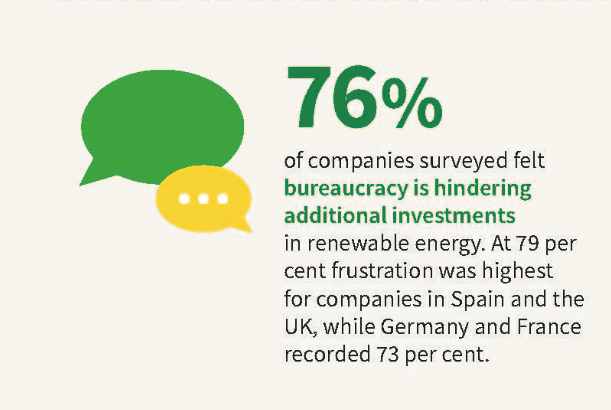 This week energy developer BayWa r.e. published its Energy Report 2019, which surveyed 1,200 European corporations about their attitudes toward renewable energy.

While 89 percent of those surveyed agreed on the leading role corporations must play in driving the energy transition, 76 percent identified bureaucracy and complex regulations as major barriers that are hindering further investment in renewables.

Almost 90 percent felt the use of renewables resulted in a better public image and 80 percent felt it gave them a business advantage. And when deciding to invest in renewables, 92 percent did so to reduce energy costs. However, a perception of long payback periods (44 percent) and high investment costs (38 percent) were identified as barriers by corporations across all surveyed countries. At just under 50 percent, the perception of investment costs as a barrier was highest in Poland and the UK.

Over half of the corporations surveyed had set targets regarding energy efficiency, the use of renewable energy, or the reduction of greenhouse gas emissions.

While companies in Germany, the UK and France mainly focus on greenhouse gas emission targets, companies in Poland, Italy and Spain aim to increase the overall use of renewable energy.

Of those corporations who identified bureaucracy and complex regulation as barriers to investment, frustration was highest for companies in Spain and the UK, both recording 79 percent, while Germany and France recorded 73 percent and Poland and Italy ranged in between.

The report was published in partnership with the RE-Source Platform, an alliance of stakeholders representing clean energy buyers and suppliers for corporate renewable energy sourcing.