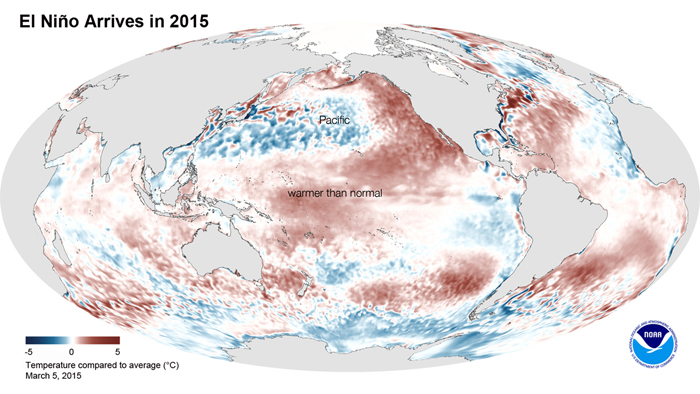 Winter weather patterns on the United States’ west coast are forecast to produce heavier than normal rainfall amounts because of El Nino. But, Southern Oscillation — an irregularly periodical climate change — combined with El Nino can cause drought in eastern equatorial Pacific and Indo–Australian areas.

“The Southern Oscillation is a ‘seesaw of atmospheric pressure between the eastern equatorial Pacific and Indo–Australian areas’ closely linked with El Nino,” according to research from the National Drought Mitigation Center, based in Lincoln, Neb.

During an ENSO event, drought can occur virtually anywhere in the world. But, according to drought research, the strongest connections are between ENSO and intense drought in Australia, India, Indonesia, the Philippines, Brazil, parts of eastern and southern Africa, the western Pacific basin islands (including Hawaii), Central America, and various parts of the U.S.

Here and there
Indonesia
In Indonesia, drought affecting its southern regions is being attributed to El Nino, according to local reports.

Drinking water wells in Wonigiri, located in central Java, are dry after no rain for nearly six months. Farmers have been hit hard and due to El Nino and the western monsoon rains, which normally occur December to March, are expected to start two months later than usual.

Nearly 247,000 acres of rice harvest have failed already. Farmers are now depending on financial support from the government for food, including basic necessities like drinking water.

Dau Tieng Dam impounds the Saigon River in southern Vietnam creating the 1.58 billion m3 capacity reservoir. Dau Tieng Reservoir is one of the largest reservoirs in Vietnam and serves 10 million people in HCMC and Binh Duong. Its water level has hovered around 69 ft, according to Dam, compared to its average 80 ft in previous years.

In a report published by Thanhnien News, Dam said low rainfall upstream has caused an increase in salinity that will increase problems.

“The rainy season is predicted to end one month earlier than in previous years and this will exacerbate the problem,” he said.

Australia
The Australian Bureau of Meteorology said the past El Nino years have cut winter and spring precipitation in its country by more than a quarter.

Lower precipitation amounts occurred in the north and east, but overall, September was the third driest September on record. The bureau thinks the remainder of the year will be warmer and drier than normal, which they partly attribute to this year’s El Nino.

United States
Across the U.S., temperature and precipitation impacts from El Nino will likely be seen during the next few months, according to the National Oceanic and Atmospheric Administration.

Drought occurs in each of the above regions at different times (seasons) during an event and in varying degrees of magnitude.

Collectively, these atmospheric and oceanic anomalies reflect a strong El Nino, but ENSO events seem to have a stronger influence on regions in the lower latitudes, especially in the equatorial Pacific and bordering tropical areas.