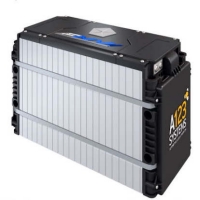 California, United States [RenewableEnergyWorld.com] When A123Systems saw its shares jump more than 50 percent in a successful Nasdaq debut back in September, some industry insiders expected it would be the first of a bevy of big energy-storage headlines. Instead, energy storage seems to have fallen out of the limelight, getting nothing near as much hype as Bloom Energy, a fuel-cell company focused on electricity generation instead of energy storage, generated when it launched last month.

But a series of recent small announcements suggest that energy-storage technologies are quietly making progress toward commercialization nonetheless. “There seems to be a lot more buzz in the last few months, and what’s interesting is it’s not all on the automotive side,” said Sara Bradford, a principal consultant for global research firm Frost & Sullivan. While automobiles remain a key area for new energy-storage technologies, she’s seeing a “spillover effect” as research and investment spreads into other areas, including grid applications for utilities and nonautomotive transportation.

Some examples? In February, Valence Technology signed a $45 million deal to supply its lithium-ion battery systems for a new line of hybrid-electric yachts, sailboats and motorboats from Beneteau Group. And International Battery, another lithium-ion rechargeable battery manufacturer, announced it was selected to supply battery systems for an American Electric Power smart-grid demonstration project in Ohio.

The community energy storage part of the project, which is being developed by S&C Electric Company, is intended help stabilize the grid and provide backup power, potentially enabling plug-in electric vehicles and a higher percentage of intermittent renewable-energy sources, such as solar and wind power.

In January, battery maker GS Battery teamed up with screen-printed solar-cell manufacturer Suniva to develop solar-power systems with batteries that can store the energy for times of peak demand. And Ice Energy — which reduces peak electricity demand from air conditioners in the middle of the day by making ice at night, when demand is low and surplus electricity is available, and using it to help cool air conditioning refrigerant when temperatures are high — signed a deal to sell its devices to the 11 municipal utilities represented by the Southern California Public Power Authority.

While many of the announcements have represented only small steps — such as pilot projects or an entrance into niche markets — they show that a number of technologies are on the right track, and some are ready to go, she said. “Exciting things are happening that set the stage to really make [commercialization] happen short-term,” Bradford said. “These announcements are certainly steps in the right direction to get these technologies ready for electric vehicles and the grid.”

Electric vehicles and grid storage represent huge potential markets for new energy-storage technologies. As startups Tesla Motors and Fisker Automotive work to advance electric sports cars, companies such as General Motors Corp., Ford Motor Co., and Volkswagen are rushing to come out with plug-in hybrids. And as utilities work to meet state renewable-energy goals and add more solar and wind power to their portfolios, energy storage to help smooth out the intermittent power from those sources is becoming ever more critical.

Of course, energy storage technologies have some big obstacles to overcome before they’ll be commercially viable for those applications, Bradford said. First of all, they’re too expensive, and companies are working to cut costs. Car battery systems also need high power density, as automakers want batteries to deliver a long electric range with as little size and weight as possible, and — given the high density — technology that ensures they that won’t catch fire. Safety also is a big issue for backup power batteries, especially those intended for homes, Bradford said.

And while both electric vehicle and clean-energy markets have been spurred by government initiatives and policies, both the auto industry and the energy industry are notoriously slow-moving. In general, companies with multiple applications will be more likely to have the foundation they need to survive the wait to the electric vehicle and grid markets, Bradford said. “Obviously, the Holy Grail is to be in the automotive or grid market for this technology, but the reality is there needs to be niche applications to build that momentum to those big fish,” she said.

Why are we seeing all this activity now? For one thing, Bradford thinks we may be seeing a delayed effect from the A123 IPO. “It didn’t happen right away — 2009 was a rocky year for the industry, with some setbacks in orders coming in and the economic downturn — but now I’m seeing some new interest,” she said. “Certainly I feel from the research that we’ve seen and the market movement that this [sector] may emerge more quickly than others when the economy recovers.”

The stimulus package also played a big role in raising interest in energy-storage technology, setting aside $2 billion in advanced battery manufacturing grants and up to $25 billion in loans for advanced vehicles, including related energy-storage technologies. Last year, Bradford said that the U.S. battery industry was “humming with revived confidence” as a result of the stimulus package.

Even though the loan guarantees have rolled out more slowly than expected, the government funding has clearly had an effect. For example, when A123 won a $249 million manufacturing grant from the U.S. Department of Energy a month before its initial public offering last year, it “was pretty clear [the grant] helped get investors excited about the company,” said Sheeraz Haji, president of the Cleantech Group. “Private capital is following public capital.” Venture-capital investment in energy storage grew 23 percent globally in 2009 to $472 million, according to the group.

With all the government and venture-capital attention, you can expect to see more energy-storage announcements coming soon. It remains to be seen whether the announcements will result in real products that can help spur electric vehicles and more renewable energy on the grid, but Bradford said that several companies are now finishing up their evaluation period — meaning that it should soon become clear whether their technologies are ready to address these markets or not.

One good sign is that a few companies are starting to see revenues, she said, pointing to Valence’s commercial deal. Bradford expects to see more energy-storage technologies to hit the market in the next 12 to 18 months.