New Hampshire, USA — Pumped hydro has been the gold standard of renewable energy storage for decades. Its combination of efficiency (70-85%) and ubiquity (perhaps as much as 99% bulk storage capacity worldwide) have made it the go-to technology for energy storage.

The wedding rhyme, “Something old, something new, something borrowed, something blue,” could be a tagline for SustainX’s approach to CAES.  Using proprietary technology (something new) and proven, decades old technologies from other industries (something old, something borrowed), the company’s ICAES (isothermal CAES) technology is “able to conserve the heat of compression at fairly low temperatures and reintroduce it during expansion and operate completely fuel free unlike traditional compressed air systems,” said Richard Brody, the company’s vice president of business development.  “We can store it in pipeline pipe or other pressure vessels.  We don’t need salt caverns.  It’s the first site-able bulk energy storage solution.”

Brody said that a SustainX’s ICAES system should last “at least 20 years” with regular maintenance, making them more cost effective than batteries.  “All batteries and most electro-chemical systems are expensive to start with and have a fairly short deep discharge cycle life,” he said.  “You need to replace it every five or six years which absolutely kills the value proposition.

SustainX has a pilot plant at its headquarters in Seabrook, New Hampshire, with field demonstrations planned for 2014.  Brody said that wind and solar energy storage should be good markets for SustainX with grid stabilization a possibility as well.

Battery storage startups are scrambling to find cost-effective ways to store renewable energy, with the field being particularly crowded and competitive.

Aquion Energy is sitting pretty, CEO Scott Pearson said.  Recent trials of Aquion’s Aqueous Hybrid Ion battery proved that “our batteries do what we thought they’d do,” he said.  And “our customers want larger batteries and more of them.”

The chemistry powering Aquion’s sodium-water battery was developed by Dr. Jay Whitacre at Carnegie Mellon University, where he is an assistant professor.  The batteries are “very simple conceptually – they’re carbon, sodium and salt water,” Pearson said.  “They require no maintenance over time and they’re safe.  You wouldn’t like the taste but you could eat one.  You wouldn’t die.”

Like other energy storage companies, Pearson sees opportunities for Aquion in wind and solar farms and microgrids.  Utilities could also benefit from Aquion’s batteries.  “We can help balance out an intermittent supply,” he said.  “From the utility side it;s reacting to demand.  If you have a spike in demand we can help.”

“We’re at a very interesting time in this company,” Pearson said.  “We have a proven battery and we are now in volume production in 2013.  It’s not a science experiment anymore — it’s a vibrant solution.”

Flow batteries are another promising battery technology.  “They are rechargeable liquid batteries,” said Primus Power CEO Tom Stepien, who helped start the Silicon Valley-based company in 2009.  “Potential is stored as chemical energy, usually in one or two tanks.  That energy is converted to electricity, as those chemicals are pumped through a reaction chamber a reversible chemical reaction takes place.  The plates are zinc typically.  When I first heard about flow batteries four years ago, I said, ‘Really?  Do they work?’  The reality is it’s just another way of storing electricity.” 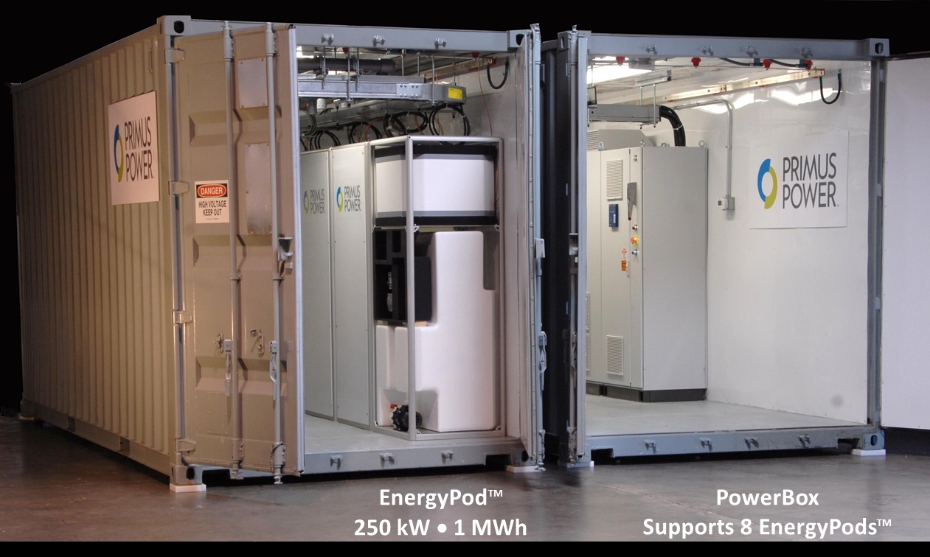 The advantages of a flow battery over lithium ion and sodium sulfur batteries include a substantially lower cost per unit energy, long lifespan and safety (they don’t run hot like sodium sulfur and lithium ion batteries), Stepien said.

They’re also modular — the units are built and delivered in a shipping container, which means they’re easy to transport and relocate.  “Some batteries are like a custom home that takes six months to get up and running,” Stepien said.  “We have more of a mobile home approach rather than a custom home approach.”

While countless companies are battling for a share of the renewable energy storage market, some firms are finding ways to improve the performance of the components that help store energy.

“Coconut has substantial amounts of impurities which are retained in the carbon after processing,” Feaver said.  “One specific problem is its high iron content.  Iron is a catalyst and when inserted into an energy storage device results in premature failure.”

EnerG2’s pure carbon “stores electrochemical energy at significantly higher rates than coconut carbons” which enables storage devices to run at higher voltages, resulting in a carbon “that can store up to 50% more energy than coconut carbons,” Feaver explained.

Not content to merely improve the efficiency of renewable energy storage, EnerG2 has a much more ambitious goal: to make gasoline “no longer make sense.”

“The next generation of energy storage improvements is already helping move us in this direction,” Feaver said.  “In the end, we believe that these up-and-coming innovations will almost certainly spell the demise of gasoline in our society.  The effort must be collective and collaborative to end the reliance on gasoline and to improve the efficiency of our energy consumption.”