In late June I wrote a forward looking article that identified several companies in my energy storage and vehicle electrification group that I expected to perform well or perform poorly during the third quarter. Since short-term market changes are notoriously hard to predict, it’s worthwhile to look back and see where I got things right and where I got them wrong. So I’ll start today with a quick summary table and assess the relative accuracy of my Q3 calls, and then turn my attention to Q4, which is shaping up as a time of bright opportunity for some companies and continuing risk for others. 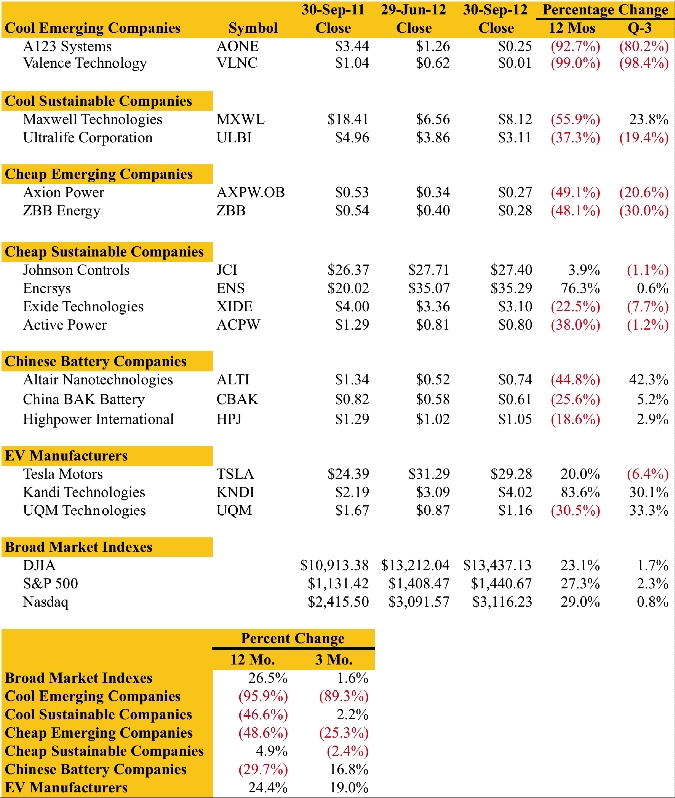 My list of expected Q3 losers included Valence Technologies (VLNCQ.PK), which lost 98.4% when it filed a voluntary petition under Chapter 11 of the Bankruptcy Code, and Tesla Motors (TSLA), which lost 6.4%. While I was right on both counts, Tesla didn’t perform as poorly as I expected and just last week it completed a $195 million secondary offering that should keep it out of the ditch for a couple more quarters. While I rarely have glowing praise for Tesla’s business model or product line, its management team deserves double kudos for pulling off a critical eleventh hour financing transaction on better terms than I would have thought possible.

Exide Technologies was on my list of likely Q3 winners and it remains on my list of likely Q4 winners. Over the last five years, Exide has reported total earnings of roughly $35 million after restructuring and impairment charges of almost $210 million. Since its earnings were so bad for so long, Exide trades at a 10% discount to book value and 8% of sales while its peers trade at an average of 1.6 times book and 44% to 70% of sales.

I maintain long-term price tracking charts on all the companies I follow and believe Exide’s chart is signaling a turn to the upside in the fourth quarter. If you look at the chart you’ll see that the 10-, 20- 50- and 200-day weighted moving average prices are clustered in a $0.13 range and during the third quarter the 10-, 20- and 50-day averages all moved up through the 200-day average, signaling the beginning of a new trend. Similar chart patterns existed in the summer of 2009 and the fall of 2010. While I’d be reluctant to estimate the next peak, Exide’s past performance is enough to convince me that a double is likely and a good deal more is possible. 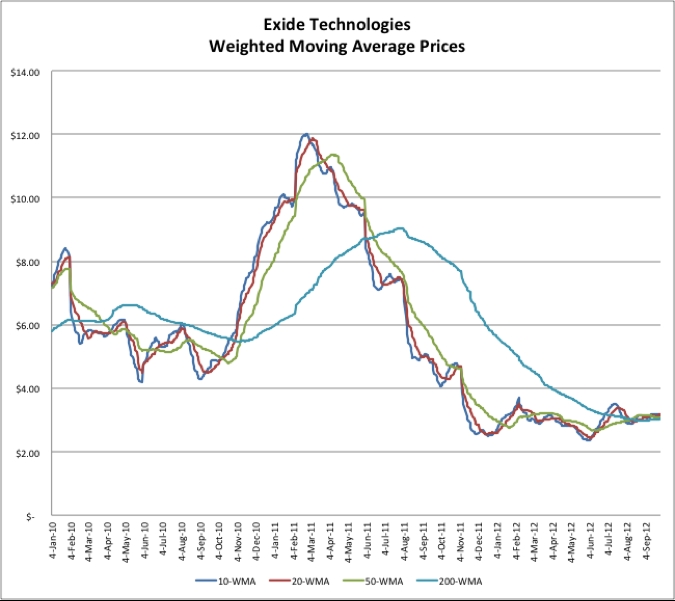 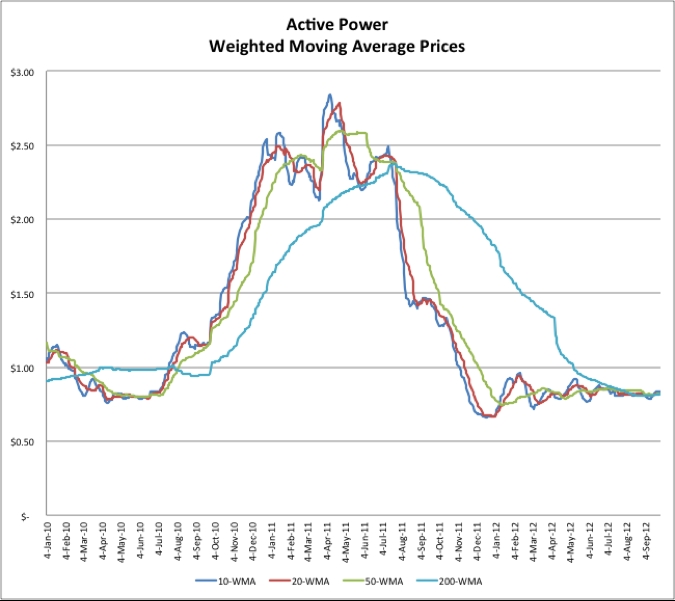 Axion Power International was on my list of likely Q3 winners and it remains on my list of likely Q4 winners. The last couple years have been very difficult for Axion as one legacy holder after another decided to liquidate for reasons that had little or nothing to do with Axion’s business and technical progress. As near as I can tell the legacy holders, as a group, are down to something less than a million shares. Since much of the buying over the last couple years has come from readers of my blog, I expect the market dynamic to quickly reverse from a supply driven downtrend to a demand driven uptrend. In addition to price data like I provided for Exide and Active Power, my Axion chart includes a fifth line that tracks 50-day average trading volume to highlight periods of intense selling pressure since January 2010. 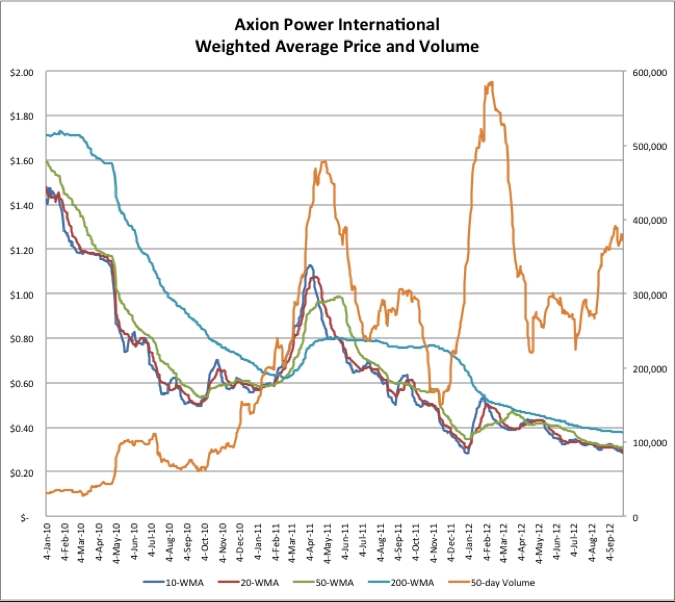 Last week I had the pleasure of delivering a keynote presentation for the 13th European Lead Battery Conference in Paris. For readers who are interested, an online version of my ELBC presentation with voiceover is available here.

While other lead battery manufacturers who presented at the ELBC talked about improving their charge acceptance rates from 0.05 to 0.1 amps per amp-hour of rated capacity, Axion was presenting charge acceptance rates of 2.0 to 3.0 amps per hour of rated capacity with four to five times the cycle life. These are not modest incremental gains like one typically sees in the battery world. Instead, they’re disruptive step changes that have several first tier OEMs and battery users making substantial direct investments in the kind of redundant validation testing that always precedes the adoption of a new technology for use in mass market products. While Axion’s PbC is not a silver bullet for all battery applications and the company still faces a variety of manufacturing, commercialization and financing risks, the principal technical risks of developing an entirely new class of energy storage device have, in my view, been successfully overcome.

In addition to my three primary picks, I’m seeing interesting chart patterns develop for Altair Nanotechnologies (ALTI), Johnson Controls (JCI), Maxwell Technologies (MXWL) and UQM Technologies (UQM). The stock prices for all four of these companies have been beaten down this year and could well be poised for a turnaround.

The scariest company in my tracking list is A123 Systems (AONE) which peaked shortly after its IPO and has been on a downhill slide ever since. In May and June of this year, A123 announced a pair of toxic financing deals that had variable conversion rates and seemed likely to be highly dilutive. In August A123 announced that China’s Wanxaing Group had agreed to provide up to $450 million of additional financing in exchange for an 80% ownership stake. The combination of these three transactions has had A123 printing stock faster than the Fed prints money ever since.

On June 30th A123 had a total of 147 million shares outstanding. By August 6th the total had climbed to 170 million and by August 23rd the total had climbed to 202 million. The reason for the explosive ramp in the number of shares outstanding was a decision to leave the toxic securities in place, instead of redeeming them, and to alter the terms of the Wanxaing financing to provide for a variable conversion rate that’s tied to a percentage of ownership rather than a fixed stock price.

During the period from June 30th through August 23rd, total reported trading volume in A123’s stock was 305 million shares, or roughly 5.5 times the number of newly issued shares. Since August 23rd, another 491 million shares have traded. Since it’s impossible to tell whether the proportionality between new share issuances and total trading volume has held steady over the last three months, it’s also impossible to estimate the total number of shares currently outstanding. At a minimum I’d expect A123 to report 300 million shares outstanding on September 30th, but the actual number could be far higher. Based on the terms disclosed for the Wanxaing transaction, that would imply a fully diluted share count in the 1.5 billion range. 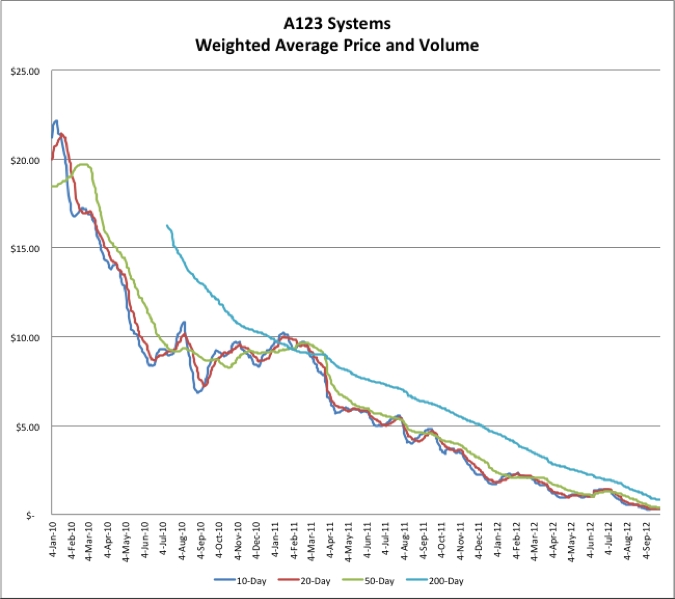 In light of the production problems it’s experienced to date and a recent brush with insolvency that will be clearly visible on the face of its September 30th financial statements, I continue to believe that Tesla Motors will soon pass its peak of inflated expectations and begin a descent into the Valley of Death that resembles the A123 experience. I don’t want to denigrate Tesla’s accomplishments as the first fledgling automaker to bring a new car to market since DeLorean, but it seems like all of the possible good news is already priced into Tesla’s stock while the bulk of the execution risks and disappointment opportunities have become frighteningly imminent.

I get hundreds of comments every time I mention Tesla’s name. The enthusiastic readers I hear from expect rave reviews, expect high reservation conversion rates, expect demand to skyrocket, expect the Model S to perform flawlessly in heavy daily use and expect Tesla to avoid the delays, defects and missteps that plague even seasoned manufacturers who launch a completely new product. I may be cynical when it comes to the applicability of Moore’s Law in the battery and auto industries, but I’m a firm believer in Murphy’s Law, fondly known as the fourth law of thermodynamics, which states: “If anything can go wrong, it will.”

Disclosure: Author is a former director of Axion Power International (AXPW.OB) and holds a substantial long position in its common stock.