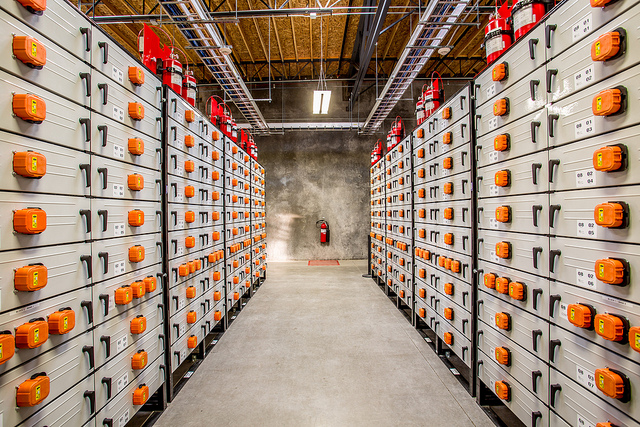 Batteries capable of storing power at utility scale will be as widespread in 12 years as rooftop solar panels are now, revolutionizing the way consumers use energy.

That’s the the conclusion of Bloomberg New Energy Finance, which forecasts the energy storage market may be valued at $250 billion or more by 2040. It expects 25 GW of the devices to be deployed by 2028, about the size of the small-scale photovoltaic industry now.

The findings in the researcher’s New Energy Outlook indicate a further challenge to the traditional utility business model, where power generation and distribution are monopolized in a single company. Energy storage devices can be used to smooth out variable power flows from wind and solar plants, reducing the need for large, centralized generation plants fired by fossil fuels.

“Batteries will get a boost as costs drop and developers see the chance for lucrative new revenue streams,” said Julia Attwood, storage analyst at Bloomberg New Energy Finance. “Batteries could offer a whole range of services to the grid — they have the flexibility that will allow renewables a larger stake in energy generation.”

Currently, less than 1 GW of batteries are operating on the grid around the world. By 2040, the industry will mushroom, storing and discharging 759 GWh, BNEF estimates.

The spread of electric cars is driving up demand for lithium-ion batteries, the main technology for storage devices that are attached to utility grids and rooftop solar units. That’s allowing manufactures to scale up production and slash costs. BNEF expects the technology to cost $120 a kWh by 2030 compared with more than $300 now and $1,000 in 2010.

That would help grid managers solve the intermittency problem that comes with renewables — wind and solar plants don’t work in calm weather or at night, creating a need for baseload supplies to fill the gaps. Today, that’s done by natural gas and coal plants, but the role could eventually be passed to power-storage units.

The researcher estimates 35 percent of all light vehicles sold will be electric in 2040, equivalent to 41 million cars. That’s about 90 times the figure in 2015. Investment in renewables is expected to rise to $7.8 trillion by then, compared with $2.1 trillion going into fossil-fuel generation.

“The battery industry today is driven by consumer products like computers and mobile phones,” said Claire Curry, an analyst at Bloomberg New Energy Finance in New York. “Electric vehicles will be the driver of battery technology change, and that will drive down costs significantly.”

The industry still has a long way to go. About 95 percent of the world’s grid-connected energy storage today is still pumped hydro, according to the U.S. Energy Department. That’s when surplus energy is used to shift large amounts of water uphill to a reservoir so it can be used to produce electricity later at a hydropower plant. The technology only works in areas with specific topographies.

There are several larger-scale battery projects in the works, according to S&P Global. They include a 90-MW system in Germany being built by Essen-based STEAG Energy Services GmbH and Edison International’s 100-MW facility in Long Beach, California.

“Utility-scale storage is the new emerging market for batteries, kind of where electric vehicles were five years ago,” said Simon Moores, managing director at Benchmark Mineral Intelligence, a battery researcher based in London. “EVs are now coming of age.”