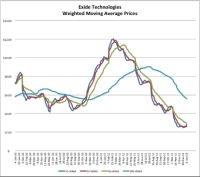 On December 16th I wrote: “My favorites for a strong 2012 include AONE, MXWL, AXPW.OB, ZBB, JCI, ENS, ACPW and XIDE. They all merit serious attention from investors who want exposure to the energy storage sector.” Since then four of my favorites have bottomed and turned sharply higher while the Pride of Palo Alto endures a short circuit. The following table compares today’s closing prices with the December 16th closing prices for those five companies.

Exide Technologies (XIDE) has been a roller coaster over the last two years. In January 2010 its 10-day weighted moving average price was $7.23. Since then 10-day average has ranged from a high of $12.02 to a low of $2.49. While many are puzzled by Exide’s volatility or blame it on operating results, I believe the root cause of the extreme volatility has been the gradual liquidation of a hedge fund that owned 31.4% of Exide’s stock two years ago; sold 13.5 million shares in 2010 and sold between 2.5 million and 10.3 million additional shares in 2011. We won’t be able to nail down an exact figure for the fund’s 2011 sales until the manager files its year-end holdings report in mid-February, but given the volume ramp and price collapse since mid-November, I think it’s likely that the fund blew out the balance of its holdings in the fourth quarter. 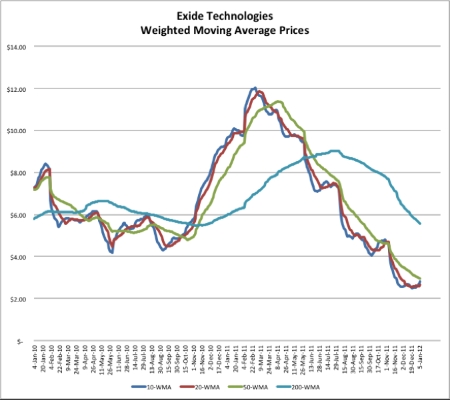 Stock markets are creatures of supply and demand and prices always reflect the balance between existing stockholders who want to sell and new investors who want to buy. Any time existing stockholders want to sell more shares than new investors want to buy, price is the first casualty. In Exide’s case, a single stockholder increased the total number of shares available to the market by almost 50% over a two year period. The end result was a stock that trades at a 41% discount to book value. I’ve been upbeat about Exide’s future for the last couple years because it’s completed a major restructuring that trashed historic earnings and its peers trade at multiples of up to two times book value. Baring a global meltdown, it’s not hard to foresee a double digit price for Exide by this time next year.

A123 Systems (AONE) has been a classic example of how the Gartner Group’s Hype Cycle applies to stock markets in the short term. After a successful IPO in September 2009, A123’s stock price reached its peak of inflated expectations in January of 2010 when the 10-day weighted moving average hit $22.15. Since then it’s been a steady downhill slide into the trough of disillusionment where the 10-day average recently hit an all time low of $1.70. 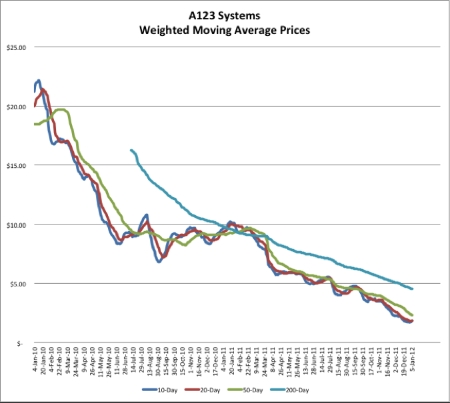 While I’m an unrepentant critic of electric vehicle hysteria on purely economic grounds, A123 makes a fine battery based on an objectively safer chemistry that’s important to our energy future and can offer compelling value in several important markets. Since April of last year I’ve said the market over-reacted to an important financing transaction and A123’s price decline was excessive. Since I argued A123 was reasonably valued in the $6 range, I believe its current price of $2.10, a 25% discount to book value, is attractive for investors who want exposure to the lithium-ion space. It’s possible that A123 will suffer further price erosion, but for now it looks like the price is ready to begin an impressive turn to the upside.

Active Power (ACPW) is a fine example of how the Gartner Group’s Hype Cycle applies to stock markets over the long term. After a successful IPO in August 2000, Active Power’s stock price soared into the $70s before beginning a ten-year slide that took the price to an all time low of $0.25 in late 2008. By January 2010 Active Power’s stock price was starting to recover and the 10-day moving average was $1.05. In April 2011, the 10-day moving average peaked at $2.84 before beginning another down cycle that recently reached a minimum of $0.66 before turning positive once again. 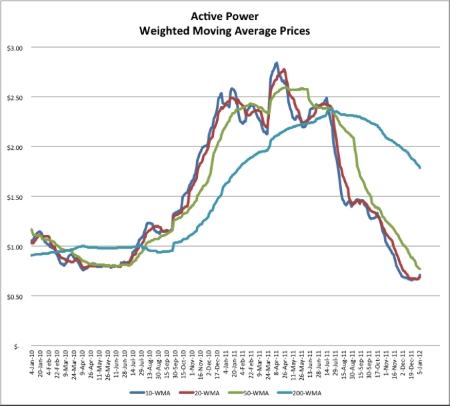 More than anything else, Active Power’s price performance is a solid example of the ancient market wisdom that all stocks have three values – undervalued, fairly valued and overvalued – and they only visit fair value briefly during transitions from one extreme to the other. It also lends credence to my belief that as stock prices oscillate around fair value the amplitude and duration of price swings, both to the downside and upside, are roughly proportional. Active Power is entering a new up cycle at a particularly opportune time because it’s on the cusp of sustained profitability, revenues are ramping rapidly and global demand for high-end power quality and reliability systems has never been greater.

Axion Power International (AXPW.OB) has finally turned an important corner and begun to emerge from the mother of all supply and demand imbalances. After completing a huge private placement in December 2009, Axion entered 2010 with a 10-day moving average price of $1.42 that stabilized in the $1.20 range (2X the private placement price) by February. When a resale registration statement for the private placement shares went effective in April 2010, the dynamic was like a fire drill in a sumo training stable as several jumbo-sized private placement purchasers tried to flip more shares for a quick buck than the market could absorb. The result was a precipitous collapse into the $0.60 range that lasted through early 2011 when the stock staged a brief rally into the $1.20 range before sliding to an all time low of $0.28 at year-end. The last nine months have been like Exide on steroids as two sumo champions got into an epic shoving match and collectively accounted for about 22% of trading volume, or almost 45% of all stock sales by existing shareholders. 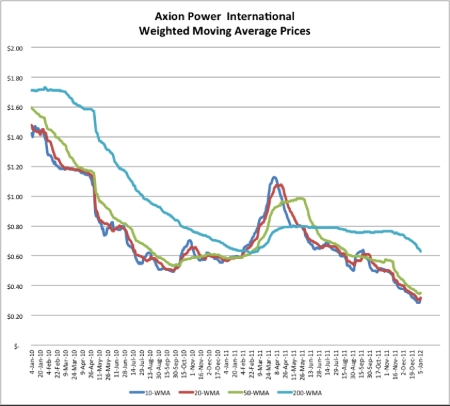 I don’t know whether to laugh or cry when I look at Axion’s stock price. At the time of the 2009 offering, the serially patented PbC battery was seen as a potentially disruptive technology, but only if Axion could successfully navigate the transition from product development to commercial production. In June of 2010 Norfolk Southern Railway selected the PbC for electric locomotive applications that ruined top quality AGM batteries from Enersys (ENS) in a matter of weeks.

In September of 2010 BMW jointly presented a technical paper with Axion at the European Lead Battery Conference that showed why the PbC is an order of magnitude better than competing lead-acid batteries for automotive stop-start applications. Just before Thanksgiving this year, Axion’s PowerCube came on line as the nation’s first behind the meter demand response and industrial power quality system to provide frequency regulation services to a regional grid interconnection. In my experience, the 2009 placement at $0.57 should have put a solid floor of $1.20 under the stock prices and each of the subsequent accomplishments should have boosted the stock price. Those increases would, of course, have been tempered by the reality that Axion needs to raise more capital in the first half of 2012, but now that the supply and demand imbalances are resolving themselves, I expect the future price trend to be very different from the past.

Tesla Motors (TSLA) is showing a different pattern from the four breakout stocks discussed above. After a successful IPO in July 2010, Tesla’s 10-day moving average stock price stabilized in the $25 range and eventually climbed to a peak of $33.59 in late November. Since the November peak Tesla’s price has fallen 23% and plunged down through the 200-day weighted moving average, a clear sign that Tesla has passed its peak of inflated expectations and is headed into the trough of disillusionment. 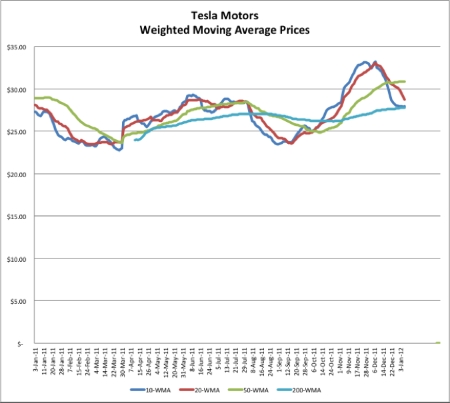 When Tesla announced the pricing and battery options for its Model S in November, potential buyers found themselves on the horns of a dilemma as they were forced to come to grips with the immense cost of range anxiety. Compared to a CAFE compliant conventional vehicle, the Model S will save the average driver 400 gallons of gas per year, or 4,000 gallons over the course of a decade.

Disclosure. Author is a former director of Axion Power International (AXPW.OB) and holds a substantial long position in its common stock.