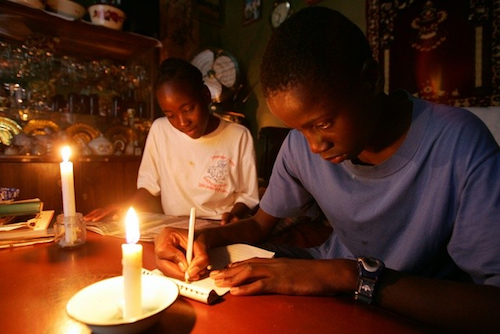 Energy poverty is a challenge in many countries and continues to attract attention in international development discourses. Beside the inconveniences people and societies have to face, the lack of affordable and reliable energy supply is a social and economic tragedy with serious implications for many development outcomes.

Sustainable energy is an enabler of health care delivery and the lack of reliable access has consequences on essential health care services especially in areas where grid extension remains a challenge. In resource-constrained settings, unreliable electricity access affects health facilities’ operating procedures, causes vaccine to spoil, and affects the use of essential diagnostic and medical devices. Access to energy is important for night-time care and for major health-care priorities such as reducing mortality and improving maternal and child health. It has real implications for educational outcomes too. The lack of reliable electricity access for instance, has implications for human capital development. As households get denied of their rights to beneficial information (through the television and internet), and children go home and study in under-lit and under-heated homes, the risk of falling into persistent poverty is inevitable.

Happenings and circumstances in some parts of the world emphasize how important it is for sustained efforts to address energy poverty. On June 3, 2018 when Guatemala suffered one of the deadliest volcanic eruptions, the search for survivors got hampered as many vital rescue hours were lost to darkness. Certainly, a reliable source of power could have extended the search hours and probably saved more lives. In Bangladesh, where only half of the over 160 million people have access to adequate and reliable electricity, it is hard to imagine how long the less-privileged must endure the pain of energy poverty. The implications on key development priorities including job creation, human capital development, gender equality, and sustainable health care delivery among others is worrisome.

Like many developing countries, energy poverty in Africa is real, severe, and widespread. Appreciating this reality is necessary and represents an important starting point for devising lasting solutions that ensure energy access is reliable, sustainable, and affordable for all.

From Djibouti in the east to The Gambia in the west, and from Algeria in the north to Lesotho in the south, Africa takes pride in being home to some of the fastest growing economies in the world. Beyond this hype however, several millions of the continent’s population remain affected by energy poverty. According to the International Energy Agency (IEA), about two-thirds of the population, equivalent to nearly 620 million people do not have access to electricity and almost 730 million depend on traditional solid biomass for cooking. In sub-Saharan Africa alone, the household electrification rate in 2016 averaged 42 percent, while the population without electricity reached 591 million. There is also a vast gap in electrification rates between rural and urban households. Access rate among rural households is about 22 percent, compared to 71 percent among urban households.

Even more disturbing is the Center for Global Development’s interactive map on Africa’s energy poverty hotspots. Apart from a few countries including South Africa, Morocco, Egypt, Tunisia, Ghana, and Algeria that have electrification rates of more than 70 percent, estimates for many other countries are disturbing. Malawi, Chad, Central Africa Republic, Liberia, and Sierra Leone have rates below 5 percent. Many others including Togo, Burkina Faso, Mozambique, Angola, Somalia, Tanzania, and Burundi have below 30 percent electrification rates.

In Nigeria, the gap between electricity supply and demand is huge, access unreliable, and cost expensive. Despite the abundant renewable energy resources, over 60 percent of the population is not connected to the national grid. Even more troubling is the fact that about 112 million people depend solely on wood as a source of fuel for cooking. Notwithstanding some recent strides, the situation in Ghana is unfortunately the same. Electricity outages, otherwise known as “Dumsor”, is a persistent problem. The 159 days of blackout in 2015 is perhaps the most striking signs evincing the deepening energy crisis and the urgency for long-term policy interventions to address the energy challenge. In the horn of Africa, Ethiopia has the largest energy access deficit, with about 70 percent of the population living without sufficient access to electricity.

From the foregoing evidences, it is fair to suggest that energy poverty is a challenge the African government needs to give serious attention. The continent has over 50 countries, each with unique energy access challenges. While a case-by-case presentations of the situation in each could be valuable, the message perhaps remains same for all – energy poverty is real; addressing it is critical to economic growth and inclusive development; and not tapping into renewables, which Africa has in abundance, would be a great disservice.

Africa’s renewable energy potential is immense and various estimates abound to suggest that the continent’s energy future is optimistically bright. By 2050, Statista projects the region’s technical potential of renewable energy to reach 5,360 exajoules followed distantly by Australia and Oceania (1911 exajoule), Middle East (I,335), North America (864 exajoule), and South America (761 exajoules). These resources and the settings in which they exist, point to country-specific green energy solutions to fit each country’s strengths and needs. The exploitable hydroelectric power potential, according to the African Energy Commission(AFREC), is estimated at 13 percent of the global total. Solar resources are also abundant everywhere, with daily solar radiation of between 5 and 7 kwh/m2 across many African countries. Biomass and geothermal energy are also aplenty along the Great Rift Valley as well as in the wet, forested central and southern regions.

Addressing energy poverty in Africa requires strong political will and sustained collective commitment from all well-meaning stakeholders including the private sector. Sustainable, reliable, and affordable energy access should be seen as a co-requisite to the fight against poverty and as an important part of the bundle of products needed to drive economic growth and inclusive development. Accordingly, pursuing strategies, policies, and regulations that holistically embrace renewable energy options and create a more conducive ecosystem for a strong corporate, governmental, and civil society partnerships is necessary. Specific consideration should be given to lowering barriers to decentralized production systems including mini grid investments as they enhance remote energy access, promote independent power generation, and offer significant bankable investment opportunities in the energy access markets.

Ishak Mohammed is a Renewable Energy Intern with the Green Climate Fund (GCF) headquartered in Songdo, South Korea. He holds master’s degrees in Development Studies from the University of Glasgow, UK, and City and Regional Planning from the King Fahd University of Petroleum and Minerals, Saudi Arabia. He is passionate about renewable energy policy, climate finance, urban sustainability and resilience.