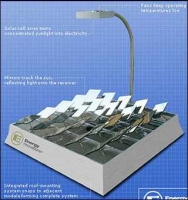 Pasadena, California-based Energy Innovations secured $16.5 million in venture financing this week to help commercialize their rooftop PV solar concentrator systems they’re calling the Sunflower. Each Sunflower module is composed of an array of mirrors that track the sun throughout the day and year, concentrating its light onto a small panel of PV cells that generate electricity. By replacing large amounts of very expensive, silicon-based PV cells with inexpensive mirrors, Energy Innovations expects to drive down the cost of solar electricity by half or more. The company is currently testing the Sunflower on its own roof in Pasadena and will soon be rolling out additional test units to sites in different climate zones. Following Underwriters Laboratory certification later this year, Energy Innovations’ subsidiary, EI Solutions, will begin installing Sunflower systems on customer rooftops in the fourth quarter. The system is designed to meet the electrical needs of grid-tied, flat-roofed commercial, government and other institutional buildings, the fastest-growing segment of the solar market.

OUR ORIGINAL DESIGN: While using the high-concentration heliostat design as a test-bed for the various subsystems and components, a group of designers and engineers set out to find a simpler and smaller solution that would allow the Sunflower to be manufactured less expensively and installed by fewer people in less time. The high-concentration design was over three meters square and the receiver as high in the air, and we knew we needed to reduce the overall unit to a more manageable size. A second objective in the refinement exercise was to reduce the level of overall concentration of sunlight on the receiver. In doing so, we would be able to use more traditional PV cells, which are not only less expensive than high-concentration cells but also have years of performance data in real-world environments on which we could rely. The result of this effort was a redesigned “primary” (the mirror array that initially reflects the light) and an entirely new receiver. ENERGY COLLECTION & GENERATION: Now standing at a little over five feet square and five feet high, the 25X Sunflower(TM) is able to meet our targets for both energy generation and cost. Each of the 25 1’x1′ mirrors is separately aligned, and yet all are attached to and moved together by an undercarriage controlled by just two motors. The receiver is approximately the size of one mirror and contains a collection of small cells that are wired together to produce electricity. It is backed by fins that dissipate heat and keep the cells operating within 30degreesC of ambient temperature at all times. LEARNINGS: We are currently testing this unit on our roof in Pasadena as well as manufacturing another 20 or so for testing in other geographic regions. Our initial results are very encouraging, leading us to believe that we will be able to ship production units in volume by the end of 2005.