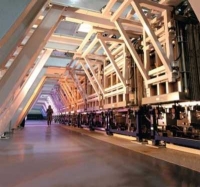 California, United States [RenewableEnergyWorld.com] Just a year and a half ago, thin-film solar company Energy Conversion Devices didn’t know when or how it would start to make money.

The Rochester Hills, Mich.-based company had reached 58 megawatts of annual production capacity by the end of its 2007 fiscal year. But in spite of reaching full-scale manufacturing and signing multiyear sales contracts for its United Solar Ovonic, or Uni-Solar, brand of amorphous-silicon films, the company had reported an annual loss of US $25.2 million for the fiscal year that ended in June of 2007.

In fact, aside from a profit of US $50.3 million — boosted by a one-time technology-licensing agreement worth US $79.5 million, in 2005 — the company had posted annual losses every year since 1996. And last year, shareholders and the company’s board of directors apparently decided they had had enough.

In April of 2007, after warning that it would miss its third-quarter earnings expectations, the company said it was restructuring to cut US $23 million in annual expenses by the end of its 2008 fiscal year, which ended June 30, and to turn the company’s innovation into commercial viability.

After a turnaround that included a new chief executive, the replacement of much of its senior management team, some 100 layoffs, new suppliers, reduced research and development spending and the sale of its battery materials business, the company, also known as ECD Ovonics, emerged triumphant. It turned a profit in its fiscal third quarter, one quarter earlier than anticipated, posting a net income of $7 million.

The turnaround has been exciting not just for ECD, but also for the prospects for building-integrated photovoltaics (BIPV), which combine solar equipment with construction materials. As one of the first thin-film solar companies to enter BIPV — the company developed solar roofing shingles in the 1980s — ECD could be considered a bellwether for the potential of the technology.

Advocates say BIPV technology could dramatically cut costs of manufacturing and installing solar power and could expand the solar market. The BIPV market in Europe, the biggest market for the technology, grew 43.8 percent last year to reach €142.6 million [US $186.4 million], according to an October report from research firm Frost & Sullivan, which predicted that the “explosive growth rate” would continue.

Another research firm, NanoMarkets, has forecast that the BIPV market will make up about US $800 million in 2011, exceed US $4 billion in global revenues by 2013 and surpass US $8 billion in 2015. While most BIPV products today are based on traditional crystalline silicon, with companies such as Sharp, Kyocera, General Electric, BP Solar, SunPower and Suntech Power involved in roofing tiles, advocates say that thin-film materials could revolutionize the market, enabling differently shaped products for new applications that crystalline panels can’t address and potentially reducing building costs.

The hopes for ECD have been representative of the vast opportunity for thin films in building-integrated applications. But with cost and efficiency challenges, as well as the difficulty of creating a brand-new market, the thin-film BIPV revolution has been a long time coming. And, with the added risk of the weak economy, it’s still far from being a sure thing.

Turnaround: From Labs to Market

ECD officials date the beginning of the company’s turnaround in September of 2007, when Mark D. Morelli, formerly a senior executive with United Technologies Corp., replaced Robert Stempel, previously the CEO and chairman of General Motors Corp., as chief executive.

One of Morelli’s first actions was to review the company’s strategy to figure out how it could turn its resources into money, said Mark Trinske, vice president for investor relations and communications. The conclusion was to shift ECD’s focus more narrowly on its solar business, and Morelli brought in more manufacturing and marketing experts — replacing nearly the entire senior management team — to help with that shift, he said. The team decided against making a product that looked like a conventional glass panel, instead throwing all of its solar effort behind a flexible laminate that could be installed differently, said Marcelino Susas, vice president of strategic marketing.

It was a bold and risky move. Because while thin-film solar advocates have long said that the potential to deposit solar material on flexible and differently shaped substrates could open up new markets that conventional silicon-based panels can’t touch now, that market has remained tiny so far. As companies wait for new markets to grow, most of the thin-film market has been in glass panels that look very similar to traditional panels.

ECD instead makes flexible, laminated sheets of amorphous-silicon films that can be installed like stickers — peel and stick — on commercial rooftops. The company thinks the gamble has paid off, as it has attracted construction-materials companies, such as Pennsylvania-based construction-materials company CertainTeed Corp. and Italian steel manufacturer Marcegaglia, that are working to integrate the laminate directly into their roofing materials and to distribute them.

The company also raised about US $500 million in a stock and debt offering earlier this year to fund its growth. Along with operating capital, the company plans to use the money to reach 1 gigawatt of capacity by 2012. “In a lot of ways, we’re lucky we raised capital then,” Susas said. “We would have trouble expanding right now if we hadn’t.”

With ECD’s sales contracts and roofing-company partnerships, Cecile Warner, a principal engineer at the National Renewable Energy Laboratory’s deployment and industry partnerships group, called the company’s strategy for pursuing the BIPV market “sound.” ECD has the competitive advantage of being one of the earliest companies out with an amorphous-silicon BIPV product, she said, with decades-old installations still functioning in the field. “Customers have a sense of comfort because they’ve seen Uni-Solar’s products around … and understand something about how they survive with time.”

But just as the company — and the BIPV market — has arrived at what could be viewed as a tipping point, the stormy economy could be poised to dampen the fast-growing market. “Studies I’ve seen [were] looking at a minimum 50-percent-per-year growth rate,” Warner said. “But I don’t think anyone’s done math on this in November of 2008. It’s a brave new world.”

As a result of the economy, some of ECD’s customers pulled out in the first quarter, delaying their purchases after they were unable to get financing. The company was able to replace those customers — reallocating the products to customers that had had orders in the backlog — and to add more, reaching a current pipeline of about US $2 billion in sales contracts.

Still, Trinske called the economy “quite a wildcard.” Customers are having trouble raising money for their projects, and that could mean slower sales to come. “We’re seeing projects with double-digit [returns on investment] that go out to the banks and can’t get money,” he said. “[The fact that] quality projects like that can’t get financing speaks to the fact that capital is not available, period.”

Subsidies could help buffer against the economy. Programs in markets such as France, Germany and Italy strongly support BIPV growth. France provides an incentive of €0.55 [US $0.73] per kilowatt-hour for photovoltaics with a “secondary architectural function,” which covers very few products aside from Uni-Solar laminates, said Jenny Chase, a senior associate at research firm New Energy Finance.

Meanwhile, Jed Dorsheimer, an analyst at Canaccord Adams, said the economy has slowed new construction, which he called one of the largest potential markets for BIPV. Also, he said, decisions about whether to install features like solar power and energy-efficient lighting tend to come near the end of a project’s development, when money tends to be tight. “The biggest competition for lighting is often carpet,” he said. “In the near-term, the challenge for BIPV is lack of new build and justifying the price, because even if there’s a [savings over time], there’s a higher upfront cost of owning the project.”

Susas disagrees that the new-construction slowdown will have a significant impact, saying that 80 percent of new roofs are on existing buildings and that the construction downturn has made solar more — not less — attractive to construction companies.

Another challenge for BIPV is its relatively low efficiency, Dorsheimer said. Uni-Solar films convert sunlight into electricity with about 8.5 percent efficiency now, compared to stand-alone thin films on glass with 10 percent efficiency and traditional panels with efficiency above 20 percent. ECD — which has produced films in its laboratories with 15 percent efficiency — is working to boost that number and is currently targeting applications with plenty of roof space, where the efficiency isn’t a barrier, company officials said.

More competition is also likely to be coming soon. Global Solar, Ascent Solar and HelioVolt Corp., for example, are developing BIPV made of their copper-indium-gallium-diselenide films, which could have higher efficiencies than amorphous silicon. Solyndra, which makes thin-film tubes that sit on top of roofs — not BIPV — also could be an “interesting” competitor, Trinske said.

While it wouldn’t disclose its per-watt production costs, ECD reported pricing of about US $3 per watt last year, and Susas said the company expects prices to remain flat or to drop slightly next year. Trinske said the fully installed price of its systems would vary, but typically come to between US $5.50-$6.00 per watt. The company has set a target of hitting costs of less than US $1.10 per watt by 2012, at which point it hopes to be competitive with conventional grid electricity.

The future for BIPV is cloudy, but several analysts say they believe ECD has as good a chance as anyone to make BIPV a success. “With a differentiated product, they have a better chance in the coming oversupply than the myriad glass module makers,” Chase said.