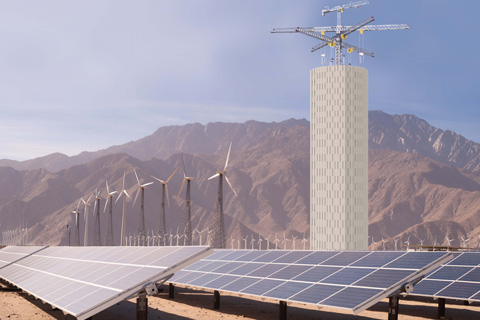 Energy Cast is a podcast featuring some of the top experts across all links in the energy industry chain, including renewables, generation and more! Jay Dauenhauer created the show and has been hosting Energy Cast for several years.

Listen to the full episode:

I am a huge fan of energy storage, particularly the mechanical variety.

Energy Vault, based in California and Switzerland, specializes in “gravity-based energy storage,” similar to pumped hydro which we explored in Episode 60.

Energy Vault’s system lifts “bricks”—approx. 35mT each—to store energy and drops those bricks to produce energy.  Rob says the six arms are coordinated with software to perform this process automatically.  A single system could store up to 80 megawatt-hours.  The company believes it will settle on a design closer to 35 MWh, producing about 0.5 – 5 MWh at a time.

I was curious how the blocks stay in place.  Would they eventually become lopsided like Jenga blocks? Rob says each block is designed with a full external shelter and cross design to help keep it secure.  He also adds that this design is equipped to handle seismic activity.

“The fact that these bricks are not connected with mortar, and the fact that they can shuffle a bit during seismic activity, actually is better,” Rob says.  He adds that his bricks were tested on “shaker tables” at CalTech and UC Berkeley, and could potentially withstand an 8.0 earthquake.

I was also curious about the design, based on tower cranes, which don’t typically stand for years on end.

“Our design does not require the amount of interlocking mechanisms that a typical crane would require, because we are building a stationary object,” he says. “Because of that, we actually have a much more secure design.”

Rob adds that his modified crane design could last 25-30 in the field.  Standard maintenance would be performed on all the other crane components. Most importantly, the bricks themselves could be fabricated on site, using local soils. Partnering with Cemex, Energy Vault is using a cement technology that uses polymers to create cement-like material.

“I call this ‘greener than green,'” says Rob.  “We can not only use the coal ash that would otherwise be landfilled at a significant financial and environmental cost, we can then build out energy storage with that.”

In addition to his tower crane design, Rob says they plan to incorporate gantry crane-based designs for producing even more power, as well as produce power in covered areas. However, he says the “stackable” design you see in Energy Vault’s animations was crucial to their success.”

“This was the ‘eureka moment,'” he says.  “Some companies that use just single, monolithic, huge blocks—you’ll never get the economics.” (This podcast originally aired in February 2020.)

Learn more about the podcast here.