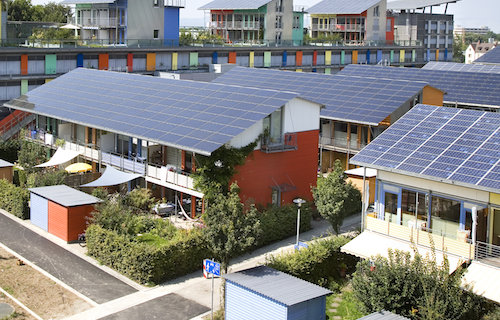 A report from the independent German think-tank Agora Energiewende (Agora) has concluded that projected increases in self-consumption through solar PV power systems in the country does not mean upsetting dynamics of the nation’s renewable energy surcharges.

The study outcomes have been welcome news to advocates for Germany’s enviable transition to clean power (referred to as ‘energiewende’). Recent figures show German solar PV capacity of over 40 GW (38.5 TWh) — providing 7.5 percent of Germany’s net electricity consumption through 2015.

There is an underlying concern addressed by the study. Matthias Deutsch, senior associate at Agora, told Renewable Energy World: “An on-going controversy in Germany surrounds the potential and consequences of self-consumption. Some people argue that large-scale up of solar PV — this rise in prosumers — means putting at risk the solidarity of the grid, because people are contributing less to the fixed costs of the system.”

A broad effect of this is thought by some to be reflected in increasing surcharges imposed by the German Renewable Energy Sources Act (EEG) on the kWh price of electricity paid by consumers and increases in grid charges, as trends for autonomy from the grid continue.

On the basis of the study’s findings, Agora observed that through 2035, albeit projecting considerable expansion, “self-consumption of solar PV will play only a secondary role in overall electricity consumption.”

The report concludes: “From today’s perspective, self-consumption poses no risk of quickly eroding the funding base of Germany’s EEG surcharge or network charges.”

Dr. Patrick Graichen, executive director of Agora Energiewende, stated: “There’s simply no reason to fear that a solar power boom will have everyone generating their own power. Even if every eligible homeowner installed a rooftop solar array overnight so they could generate their own power, the EEG-surcharge would only increase by a maximum of 0.5 cents per kWh.”

Providing further insights, Deutsch said: “The potential of self-consumption determined by the study is relatively low. Importantly, even if the price of PV energy storage systems continues to fall rapidly, growth of these systems in energy terms will remain gradual, so the impacts on EEG surcharges would not be too great.”

He added that the study is good news for the solar PV industry, and provides substance to the on-going debate about how to support and manage self-consumption in Germany.

“This is important, of course, since more and more PV storage systems for self-consumption are being offered in the market, and as we see in the report, this market is set to continue expanding,” he said.

It found that potential residential self-consumption amounts to between 4.6-38.6 TWh per year by 2035. The upper figure was calculated with contribution of energy storage systems included; and the authors noted that there are reasonable grounds for adopting this projection.

However, since not all of this energy is conventionally supplied by the grid (notably due to solar PV powering novel heating applications) the amount of energy that self-consumption may offset in terms of grid demand is less, around 20 TWh.

In the second sector considered by the study, commerce, trade and services, the authors concluded: “We found considerable potential for self-consumption: around 3.8 TWh per year, or just under 3 percent of total electricity demand in the sector, is economically feasible.”

Altogether therefore, Deutsch said that “overall, self-consumption may lead to reduced energy use from the grid of around 24 TWh per year. This represents about 5 percent of today’s net electricity consumption.”

Correspondingly, this potential would affect Germany’s EEG surcharge only moderately: a rise of around 0.5 euro cents (US$0.55) per kWh. While EEG surcharges and other components of power prices have risen in recent years (see figure 2), Deutsch points out that the increase wouldn’t be significant.

He emphasised the hypothetical nature of this calculated increase: “This increase refers to an instant realization of the total potential for self-consumption [that] we expect to unfold only gradually in the future. At the same time, other factors will tend to reduce the EEG surcharge.” 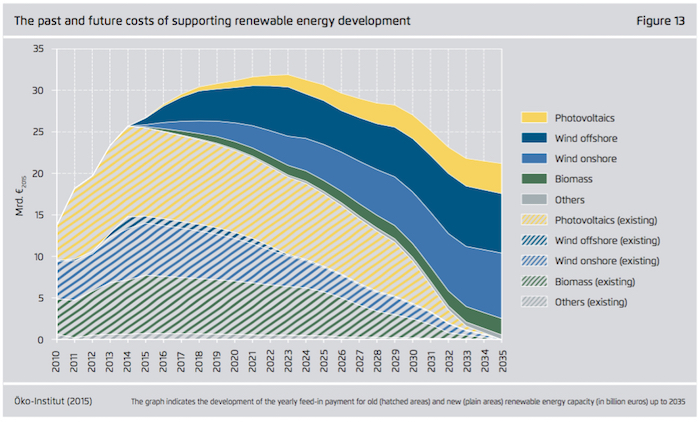 Figure 3: The future costs of supporting renewable energy in Germany (in billions) suggests that even promising development of solar PV will not overwhelm the national support system. Credit: Agora Energiewende.

Beyond assurances, the report recommends that the German government now look towards delivering a stable regulatory framework that encourages self-consumption via solar PV.

Previous regulatory amendments, comments Deutsch, have been counter-productive and sent mixed signals to the industry and prosumers.

“While the 2009 version of the EEG featured a bonus scheme for self-consumption; [in contrast] the 2014 revision introduced additional charges,” he said.

Contradictory stances have also been expressed towards the nation’s energy storage support schemes.

He concluded: “Instead of such mixed signals from policy makers, we need to develop a forward-looking system of levies and fees, which includes owners of private property and their tenants in the overall costs of the system; and which ensures that future changes in legislation do not retroactively devalue investments in on-site solar power.”