In the US and Europe, the renewable energy industry has seen unprecedented growth in recent years, but policy uncertainty and budgetary constraints have created headwinds in both regions. At the same time, many developing countries are putting in place policies to encourage investment in the sector. In 2010, for the first time, investment in renewable energy in developing countries (US$72 billion) exceeded that in the developed world ($70 billion). Will this trend continue? What risks and opportunities can investors expect as they enter emerging markets?

US and Europe Outlook

Various incentives have driven growth in the US renewable energy industry in recent years, particularly the Treasury cash grant programme, investment and production tax credits, and the Department of Energy Loan Guarantee Program. However, the 1603 cash grant programme required applicants to meet certain benchmarks by the end of 2011, the Production Tax Credit (PTC) is set to expire at the end of 2012, and the loan guarantee programme essentially finished in September 2011. Hopes for a national renewable energy standard and broader climate policy have lost momentum amidst economic and budgetary woes. Similarly, lobbyists have failed to convince lawmakers to include cash grant or PTC extensions in the payroll tax deal forged at the end of 2011 or the subsequent payroll tax extension approved in February 2012. The momentum behind US renewables has slowed, with the wind industry feeling the greatest strain.

Meanwhile, Europe is having its own problems. The debt crises have placed huge budgetary constraints on European governments and some governments are looking to renewable energy incentives for cuts. Germany has made several cuts to its subsidy programmes. Spain attempted to make retroactive cuts to certain feed-in tariffs (FiTs) and further subsidy cuts were announced in January 2012, with Spain’s Prime Minister announcing in July that it would levy a new tax on the renewable energy sector. Italy and the UK announced cuts in subsidies during 2011. The sovereign debt crisis may also temper investment in the Eurozone.

As uncertainty looms in the US and Europe, investment in renewables is flowing into emerging markets. Some countries are trying to meet their obligations under the Kyoto Protocol; others want to promote their national resources, cut their dependence on imported oil, address increased power demand, or foster job creation.

Whatever the motivation, significant renewable energy investments are being directed to countries such as India, Turkey, Morocco, South Africa and Brazil, amongst many others.

As in the US and Europe, a key driver for investment in developing countries will be policy certainty. History has shown that investors look to nations with strong and stable policy support, and direct their money accordingly. In addition to the powerhouses of China and India, many other emerging markets are shifting policies to make a renewable energy play.

Israel has established a FiT for wind installations up to 50 MW and for solar, and set a renewable energy target of 10% by 2020. In addition to significant research, development and infrastructure investment, Saudi Arabia is formulating a policy that includes a FiT as well as a programme that grants 20-year power purchase agreements (PPAs) to renewable energy project developers.

Jordan has set a target of 10% by 2020, and has created a project tendering programme and the Jordan Renewable Energy and Energy Efficiency Fund to provide financing support to qualified projects.

The UAE not only has a renewable energy target of 7%, but has arguably made the biggest investment in the MENA region through its state-owned entity, Masdar, which has the mandate to make the UAE a global leader in renewable energy. Masdar is developing Masdar City, a carbon neutral city that will deploy significant megawatts of renewable energy. It is also developing Shams 1, a utility-scale concentrated solar project, and has other ventures both inside and outside of the UAE using various sources of renewable energy.

Asian nations are also stepping up. In the Philippines, which aims to increase its renewable energy capacity to 15,300 MW by 2030, the recently enacted National Renewable Energy Programme sets specific targets for renewable energy and establishes dedicated investments totalling $27.6 billion by 2030.

Thailand established a target of 20% by 2020. This is supported by significant government investment which gradually decreases until 2022. Quasi-governmental entities, such as the ESCO Venture Capital Fund, have been established to provide venture capital, equity investments, and credit guarantees. Meanwhile, Indonesia has eased restrictions on foreign investment to expand use of its potentially enormous geothermal resources within the ‘Ring of Fire’ volcanic region.

In Latin America, Argentina has enacted a series of policies directed towards renewables. The Renewable Energy Generation Program has set a target of 8% renewable energy by 2016, and is supported by a tender programme from the public utility, ENARSA, for 1000 MW of renewable energy PPAs. The policy also created the Fiduciary Fund for Renewable Energy, which provides subsidies for solar photovoltaic, wind, geothermal, biomass, biogas and hydropower projects.

Brazil, which expects electricity consumption to increase by 52% through 2019, has unveiled the 2010-2019 Decennial Plan for Energy Expansion to phase out construction of fossil fuel plants by 2014 in favour of biomass and wind generation power plants. Brazil has also set targets on specific renewables by 2019: hydro (116 GW); small hydro (7 GW); biomass (8.5 GW); and wind (6 GW). Building on its popular biomass purchase contract auction, the nation has now introduced such an auction for wind energy.

While just a sample of the policy developments in emerging markets, these examples point to a future where the deployment of renewable energy broadens and the competition for investment increases. However, although the statistics appear to make attractive reading for potential investors, they will need to be convinced that the additional risks of investing in those markets can be effectively mitigated and that projected returns justify the enhanced risk.

The dynamic events in the Middle East in 2011 remind us that a country’s political landscape must be well understood. Political swings can bring renewable energy projects, and supporting policies, to a halt. They could lead to the nationalisation of a project or company, or discriminatory treatment. Civil strife could endanger workers on the project. Short of these more dramatic risks, politics also touches offtake and transmission arrangements. 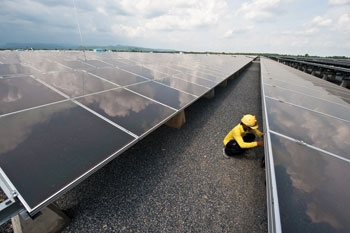 The 73 MW Changwat Lop Buri project in Thailand was recently brought online by a syndicate of lenders to which the Asian Development Bank contributed US$70 million. (ADB)

Policy stability must also be considered. Will a change in leadership compromise a nation’s renewable energy policy? Investors may be attracted to new incentive schemes, but a change of leadership could quickly reverse these incentives. Of course this risk is not limited to developing countries, as evidenced by the retroactive reduction in European FiTs and the lack of consistent policy in the US. But investors may consider it a greater risk where they are less familiar with a nation’s politics.

Investors may be able to mitigate political risk by purchasing political risk insurance. However, they will need to consider what risks remain and factor in the additional cost of premiums.

Another risk factor in developing countries is the quality of offtakers. Renewable energy projects usually generate most of their revenue from a long-term PPA. In emerging markets even state-owned entities may not be creditworthy. Investors will want adequate assurances that the offtaker can pay for power over the term of the contract.

Even with these assurances, there remains the risk that the offtaker will, at some point in the future, lose its appetite for higher cost renewable energy, particularly when it is buying it from a foreign-owned entity. Foreign investors will want to protect themselves against early termination of their power contracts. Even then, contractual protections are only as strong as the institutions that enforce them.

Investors also need to ensure that their projects can obtain cost-effective grid access. While most developed countries have clear regulatory frameworks that allocate costs of transmission upgrades, developing countries tend to be more confusing. Since transmission and interconnection are typically long lead items in the development process, investors should learn this process early. Transmission cost allocations – together with the challenges of land acquisition and permitting needed for transmission in a foreign jurisdiction – could make an investment unworkable.

Since large-scale renewable energy projects cover huge swathes of land, property ownership is fundamental. Some countries may prohibit foreign ownership of property, while others may place restrictions on it. It can also be hard to determine land ownership, which could lead to time-consuming processes, including protracted legal challenges.

Investors will need to consider general foreign business risk when investing in developing countries. There may be barriers to investment, including laws which prevent or restrict foreign ownership of certain assets classes, such as land or energy generation assets, or at least require a percentage of domestic ownership. Some countries restrict even passive foreign investment, or attach so much red tape that investment is less desirable. Understanding the regulatory framework of a nation is a prerequisite to investing there. 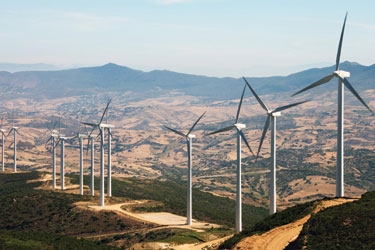 US-based investors and companies listed in the US will need to consider the impacts of the Foreign Corrupt Practices Act. This establishes anti-bribery and accounting practices those investors will need to adhere to.

Another topical consideration is the integrity of the country’s sovereign debt. Recent history has shown that even seemingly strong economies can experience difficult times with their sovereign debt. Investors will want to get comfortable that their investment will not be wiped out by a sovereign debt default and will need to bear in mind that emerging markets may not be immune from the economic troubles that have plagued developed countries in recent years.

Despite these risks, some emerging economies and projects have already shown they are strong enough to attract private investment. For example, the UAE’s flagship project in western Abu Dhabi, the Shams I CSP plant, recently financed its first 100 MW phase. The $600 million project brought together Total, Masdar and Abengoa as sponsors, with 22-year debt financing from 10 private banks.

Since there is a higher perceived risk, many projects will benefit from the support of multilateral banks and public finance entities, including export credit agencies, World Bank institutions, the Asian Development Bank and other similar entities. These institutions often provide the support needed to push projects through financing, and there is evidence that they are taking note of the push toward renewables.

The Brazilian Economic Development Bank has provided a significant portion of the debt financing for renewable energy projects in Brazil, while the Vietnam Development Bank secured a $1 billion loan from the Export-Import Bank of the US, which will also act as guarantor, for four wind projects that will deploy GE wind turbines. The 73 MW Changwat Lop Buri project in Thailand recently became operational, assisted by a syndicate of lenders and $70 million from the Asian Development Bank.

In November 2011, the US Export-Import Bank awarded $103.2 million in loans for two solar PV projects being developed in India using PV modules from US companies First Solar and SolarWorld.

While emerging markets introduce new risks and challenges to Western developers and investors, they also offer vast opportunities. With policies incentivising renewable energy and money following close behind, while uncertainty looms in certain Western markets, now may be the perfect time for investors and developers to position themselves in these new markets.