All solar installations today should be thinking ahead to the not-so-distant future. The main question to be asking is whether your solar system will seamlessly integrate with a battery. Most solar systems installed today will not. And although battery backup may not be on your radar at all, it should be, and not for the reason you’re thinking.

Battery backup in the traditional sense has been geared toward power outages – hurricanes, Enron catastrophes, etc. As a solar expert, I would never recommend battery backup for these rare instances when the grid goes down. There are far cheaper and more versatile solutions for these circumstances, such as gas-powered generators.

There are also the grid independence proponents that think of battery backup as a way to completely disconnect them from the grid, but again this does not make any economic sense. Being off the grid with solar and batteries is a great concept, but what happens when it rains for a week straight and your solar system fails to replenish your batteries?

Smart battery solutions will be a part of our immediate future, and the reason for this strictly relates to policy. Utility companies throughout the country are in uproar over net-energy metering and the effects it has on their grid. Why, after all, should a homeowner with solar reap benefits from the grid but not have to pay into the infrastructure? Rate reform, particularly in California, is coming in the form of flattening tier structures and minimum bill charges.

The California Public Utility Commission (CPUC) is adding an additional twist to rate reform. The CPUC has released new goals for policy that will have all utilities in the state switching over to default Time-of-Use (TOU) rate schedules by 2019. This rate reform is being touted as a good thing for rooftop solar. And on the surface, it makes sense. On-peak rates are currently during daylight hours when solar is already kicking electricity back to the grid, which gives the solar owner the benefit of higher compensation for their solar production. But policy is already entertaining evening on-peak windows, due to the increased demand as people start coming home from work. This duck curve illustrates that this ramp is set to increase as solar adoption rates continue to soar. 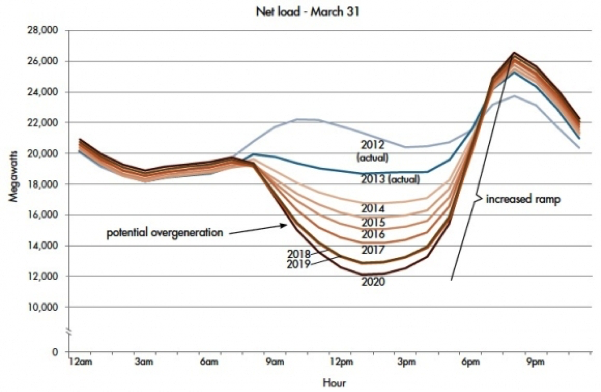 With an evening peak window, solar savings will decrease, and that’s why thinking ahead now is a must.

Smart battery solutions will be key in maximizing savings. Battery systems that know the optimal times to charge and discharge based off of rate structure will combat on-peak pricing. But there is a major issue with this: not all solar systems are capable of integrating with batteries.

Solar panels produce direct current (DC) electricity that needs to be converted to alternative current (AC) for household usage. A solar inverter is used to do this – but not all inverters are created equal. Let’s review the three main types of solar inverters, and how well they will work with battery back-up systems:

This is the most common type of inverter and is typically a single unit on the side of the house. When introducing a battery to the equation, an issue comes up: batteries are DC, and in order to store energy produced from an inverter, the electricity would need to be converted back to DC – and then again back to AC for a household to use. These additional conversions will cause efficiency drops and completely offset any savings. A solar system installed with a string inverter would need to be altered and retrofitted to work efficiently with a battery – a costly procedure.

These inverters are commonly thought of as the premier inverter type available. With these systems, each individual panel has its own inverter, and the energy is converted from AC to DC right on the backside of the panel. This works great for maximizing efficiency in shaded conditions because these systems work in a parallel circuit, avoiding the Christmas-tree-light-string symptoms of a string inverter. However, when smart batteries are put into the equation, micro-inverters are completely incompatible. Work-around retrofits that are possible with a string inverter are impossible since the power lines coming off the roof are already carrying AC. Again, the additional AC to DC conversions will deter a battery system.

SolarEdge is the only mainstream manufacturer of string inverters with optimizers. They are leaps ahead of their competitors in their technology and foresight. Their system integrates optimally with smart battery systems, eliminating double conversions of the current. Founder and VP of Product Strategy Lior Handelsman, boasted to PV Tech Storage “Our inverter can do time-of-use, it can even take power from the grid, push it back into the battery and then reuse it later.” On top of all that, it also has the parallel circuit perks of the micro-inverter. Its price point is above a string inverter, but below micro-inverters. SolarEdge is working closely with Elon Musk’s Tesla Powerwall Home Battery – because battery backup is the future.

At GloSho, a recent CleanTech conference in Los Angeles, billionaire investor Steve Westly took the stage (video link) with an inspiring speech keying in on the fact that “[The Gigafactory] which comes online in 12 months… will more than double all of the lithium-ion capacity on the planet today.” Battery storage was the future, but that future is now.

Solar will be a huge part of the utility grid’s future, and because of this, policy will change to not cannibalize the utilities. In doing this, it will put solar customer’s long-term investments at stake. In order to protect yourself from future policy change, all possibilities must be thought out, and appropriate measures must be taken. Your inverter selection is not something to be overlooked.

If you’re looking for solar consultants that have your interests in mind, visit pickmysolar.com.

Disclaimer: Author has no investments or business relationships to SolarEdge. This is strictly an opinion piece based off of market trends and available products.

This article initially appeared on PickMySolar.com.