Dramatic cost reduction in photovoltaics (PV), combined with lower electrical storage costs from batteries for the automotive industry, are creating new business opportunities for grid-tied PV systems that include energy storage. This article addresses the technical and economical justification for electrical storage with PV and what it means for the PV industry.

In 2002 the California Energy Commission Public Interest Energy Research (CEC PIER) funded an investigation into the value of electrical storage combined with PV by Dr. Richard Perez of the State University of New York Albany. This work was intended to address the intermittency associated with PV technology.  Intermittency is the reduction of solar output caused by the movement of clouds over PV modules. Dr. Perez came up with the term Solar Load Control (SLC).

At the time, this research concluded that when extrapolating solar load control utility-wide, 104 MW of direct load control provided a firm 249 MW peak reduction from PV (see Figure 1 below). In collaboration with Tom Hoff of Clean Power Research, Dr. Perez has also shown that intermittency of less than 15 minutes can be minimized with a portfolio of PV systems dispersed geographically within a 10 km X 10 km area.

Figure 1: In the ideal situation at left, peak load is reduced by the full installed PV capacity with no disruption from clouds. PV output may be reduced before the end of peak period because of clouds, reducing the achievable demand reduction (middle). By shedding load in response to the reduced PV output due to clouds, the solar load control restores the full demand reduction (right).

The CEC PIER funded two PV demand reduction research and development projects during the same time period as the studies on load control.  One project developed the ability for an inverter to dispatch stored electrical energy in batteries upon a signal. The other project deployed a two-axis PV tracker system to supply power directly to irrigation pumps — upon a signal the pumps would be turned off, thus sending all PV electricity as peak electrical production to the utility if necessary. These projects had challenges regarding the signal, the security of the signal and who owned the signal. (Dispatchable techniques will be discussed in Part II.)

Ten years later, this CEC PIER PV research and development work is proving to be quite valuable to address intermittency concerns for large penetration of PV technologies at the utility level. Lower costs for electrical storage technologies due to increased interest in hybrid and electric vehicles are driving the cost-effective economics of PV with electrical storage.

At Intersolar 2012 SMUD reported that certain storage technology appears to be below the $400/kWh threshold for cost-effective utility storage. Driven by plug-in hybrid and electric vehicles (PHEV), future stationary applications, like lithium-ion storage, promise to be under $400 per kilowatt hour ($/kWh) including balance of plant costs for power electronics and utility interconnection.

Different energy storage technologies and their current costs broken out by system size have been presented by the Electric Power Research Institute (EPRI) and are shown in Figure 2. Figure 2 shows the installed capacity costs in dollars per kilowatt ($/kW). The difference between $/kW and $/kWh includes the amount of time the storage is used over the system lifetime including all costs. These costs are constantly being lowered, with correspondingly higher and higher values being discovered by the utilities. 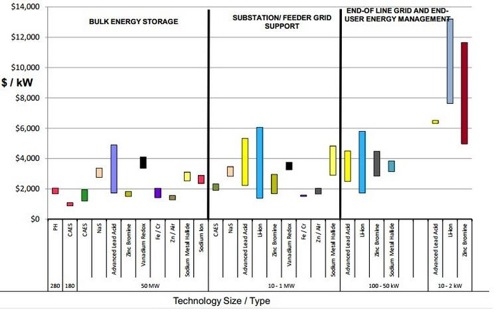 Figure 2:  Summary of installed energy storage system costs in $/kW by size and type. (Courtesy of EPRI, Source: EPRI 2011 Energy Storage Cost Data Base; EPRI 2012 Energy Storage Cost Benchmarking Report. Estimates are in 2012 dollars and do not reflect regional cost differences across the US. Not all applications and technology options are represented. Site specific and application specific costs can vary significantly.)

In the wind sector, many analysts have concerns about the reliability of forecasting, concerns about ramp rates, off-peak production times, and have a perception about unpredictable production during peak demand periods.

In solar, analysts believe that it has a peak period that is generally 4 to 5 hours before the utility peak period, and also have concerns about ramp rates.

The Sacramento Municipal Utility District (SMUD) is now researching PV storage technology with pilot projects. At Intersolar 2012 SMUD reported that on top of their existing generating capacity of 3,300 MW, they are interested in 500 to 800 new MW of PV in the next five years. At these large capacity levels, it will not be acceptable for clouds to minimize energy production, therefore SMUD is moving forward with pilot projects including residential PV and electrical storage, utility sited PV with storage, a residential energy smart community project, solar EV charge port with storage, and a microgrid with energy storage demonstration project. (REWorld has previously written about SMUD energy storage activities here: “Utility Works to Unlock Smart–Grid Potential of Solar–Storage.”)

In addition to the utility factors driving the need for storage, new applications and benefits of storage have been identified and investigated including central storage, distributed storage and location specific storage. Some of the benefits from these various applications are listed in Figure 3 provided by Jim Eyer of Strategen Consulting. 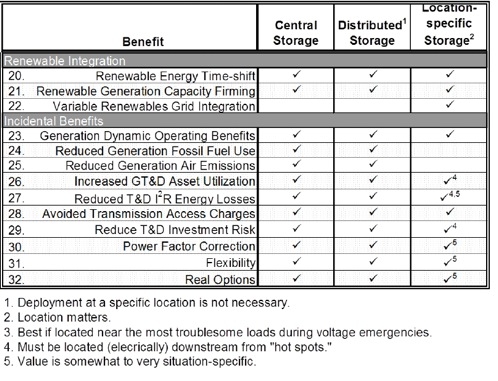 The value of storage in comparison to the cost of storage at $400/kWh are reflected in Figure 4 below. Transmission distribution deferral and aggregation values are clearly already above the $400/kWh threshold. When adding up all these values, storage combined with PV is now providing economic incentives to the utility. 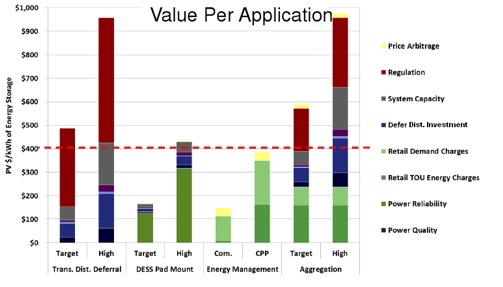 As the cost of PV continues to fall, it increasingly is becoming a generating resource to utilities. Electrical storage has been proven cost effective in hybrid electric vehicles, off-grid PV systems, and is now being investigated in utilities that have large portfolios of wind and solar technologies.

Cost-effective electrical storage technologies driven by research and development is increasing the value and market for PV across the nation. These storage approaches are expanding the grid-tied market and address utility concerns that include intermittency, capacity and other policy-driven goals. Researchers should now investigate the value of retrofitting storage on PV systems, if utilities can benefit and if PV inverter companies can include dispatchable electrical storage options in future products. If trends continue, we will be seeing lots of PV combined with electrical storage in the near future.

Please comment below and help influence the next part of this two-part article. Part II will address a new PV business model which promises to capitalize on electrical storage, utility values and smart grid technologies. Thanks in advance, hope this helps.

We stand on the shoulders of giants who come before us in these efforts; thanks for all the help developing this article including the work of Dr. Richard Perez, Jim Eyer, Mark Rawson, Dan Rastler, SMUD, the CEC, EPRI and many others.