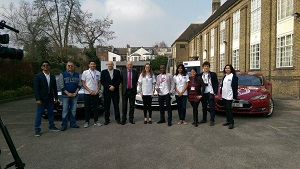 The London campus of ESCP Europe Business School hosted the launch of the ESCP Europe Electrical Vehicle Road Trip (EVRT) on 12th March 2016. The event included the first energy conference in a four-part series taking place in London, Berlin, Turin, and Paris. The topic of a lively panel discussion was ‘Electric Vehicles in the UK: Turning Niche into Mainstream’.

To give attendees a hands-on experience of what travel in an electric vehicle is like, the EVRT team arranged for a Tesla Model S shuttle-service to operate between West Hampstead and Finchley Road tube stations and the ESCP Europe campus. For most, this was their first taste of an electric car, and reactions were overwhelmingly positive.

After a group photo and showcase of the Tesla cars parked at the campus, Professor Simon Mercado, UK Director of ESCP Europe, officially opened the first ever ESCP Europe EVRT. During his speech, Prof. Mercado highlighted that the EVRT is unique to ESCP Europe due to the School’s multi-campus set up – ESCP Europe has campuses in Berlin, London, Paris, Madrid, Turin and Warsaw.

The panel consisted of a selection of the EV industry’s top experts. Despite all being strong advocates of the technology, the discussion was lively and presented a range of opinions on the potential and future of electric cars.

Erik Fairbairn, CEO at PodPoint (a company responsible for EV charging stations across the UK), compared the innovation in electric vehicles to that of mobile phones: “It’s an evolution similar to what we have seen with mobile phones. We didn’t start with iPhones. It takes time,” he said, noting that by 2020 there are forecast to be almost three million electric vehicles on the roads of the United Kingdom. Ben Fletcher, Senior Product Manager for the Z.E range at Renault, commented that, by this point, an EV battery would take us to the industry-changing 200-mile range.

The talk ended with a lively Q&S session from the audience. Keith Probert, Managing Director at Viimi, challenged the panel to explain why electric vehicles are not using a battery swapping system similar to that of forklifts which operate 24/7 in factories and warehouses across the world. Fairbairn highlighted the cost of batteries as a reason, and how having an oversupply of charged batteries waiting to be swapped out for low batteries would be costly and a waste of resources.

Another member of the audience asked how electric vehicles can be promoted in a country with traditional (fossil fuel) energy mix. Afeez Kolawale-Alade, Founder of TryMyEV, introduced the audience to the concept of ‘Well to Wheel’, a model that looks at the lifecycle of emissions from the sourcing of the fuel (well) to the combustion in an engine (wheel). The model reports on greenhouse gases and six additional pollutants. According to Kolawale-Alade, carbon emissions released from drilling are higher than that from the electricity generated by an electrical vehicle.

Simon Empson, MD of Broadspeed and a keen EV driver, described his experience of using his vehicle as a delight. However, the long charging time does sometimes create unforeseen delays. Ben Fletcher, Senior Product Manager of Renault’s Z.E Range, introduced us to the different user profiles for the vehicle, and admitted that they are not the perfect choice for all road users – yet!

Overall the panel created huge enthusiasm for the industry and an air of optimism filled the room when looking at how far the industry had come and the predictions for the future. Panellist Hugh Edeleanu, Chairman, H.E. Group Ltd and car supplier for the ESCP Europe EVRT, exhibited his confidence in the industry by describing how, three years previously, he invested his own money in 33 Tesla Model S cars which are available to rent. He bought an additional three last year.

After an interesting and educational panel discussion, the event ended with a buffet lunch, over which the conversation and debating continued. Journeys around West Hampstead in Tesla Model S cars were offered to those wishing to try the vehicle out for themselves.

The Electric Vehicle Road Trip 2016 takes place from 13th to 18th March, 2016. For more information, please contact Ben Pullen and follow the tour via social media #ESCPEuropeEVRT. You can also track them live across Europe via the link!