More
Home Storage Grid Scale Editor’s Letter: If We Could Talk to the Batteries… 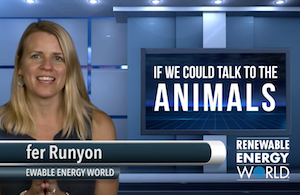 One year ago, at Solar Power International 2016, I helped Julia Hamm, CEO of the Smart Electric Power Alliance (SEPA) with a keynote “skit” in which I was a reporter interviewing a homeowner about her awareness of her energy use. The year was supposed to be 2026.

Playing the role of fictional homeowner-of-the-future, Hamm explained that her relationship with her utility had changed over the decade because the utility had put new devices in her home, solar on her roof and “a box in the garage.” Now, in 2026, Hamm’s family paid the same amount for energy each month, used less of it and was happy because they knew it was coming from cleaner generation sources.

One year ago, that 2026 scenario seemed very far-fetched, but after doing research for this issue, I can see how it may come to fruition.

Utilities are doing really interesting work piloting projects in which they can “talk” to batteries in homes or businesses, behind the meter. In fact, starting this month in California, all inverters installed are required to be “smart” inverters and include communications systems that allow utilities to use them, should they wish, to provide grid stabilization services like Volt/Var support and frequency regulation. They are still working out the rates and how the whole system might work, but it’s groundbreaking work and I believe it will fundamentally change the way utilities and home- and business owners sell and buy energy.

And a lot of it hinges on energy storage.

Our article on Solar SCADA sheds some light on the new California inverter regulation and we’ll have more articles about grid modernization in our next issue. Stay tuned.