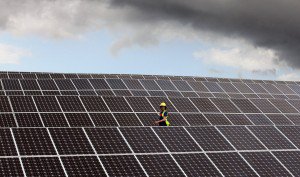 Germany-based energy supply company E.ON is looking to move into the U.K. and enter the energy storage and solar energy markets. The company unveiled their available solar and storage system technologies to U.K. customers this week.

The company has launched a website specifically for the E.ON Solar and Storage business along with an app that customers will be able to use in combination with their technology installations. E.ON’s app will display consumption, storage, and generation information specific to their solar or storage technology. E.ON has said that these solar and storage technologies have the potential to reduce customers’ energy costs by up to 30 percent.

E.ON’s goal for launching E.ON Solar and Storage was detailed by the head of commercial solutions Gavin Stokes. Stokes expressed that the energy supplier would like to be at the forefront of sustainable energy solutions that are beginning to make headway worldwide. By introducing these renewable energy solutions to both existing customers and potential, new customers, E.ON will be able to get their feet wet in the industry.

Although E.ON is new to the solar and storage markets of the U.K., the company has had some practice in Germany and Sweden. The company introduced E.ON SolarPros to the German market in 2015. SolarPros provides maintenance, repairs, and inspections for customers with existing solar technology. This service business has allowed E.ON to put their solar knowledge into practice. Additionally, it has allowed them to learn a great deal about the solar industry from a new perspective.

E.ON has also made great progress in Sweden. The country’s commitment to a progressive energy strategy has allowed companies like E.ON to team up with state officials on renewable energy projects. In recent years, E.ON has signed partnership agreements and climate deals with Swedish cities to promote energy solutions with positive environmental impacts.

After gaining solar industry experience in Germany and Sweden, E.ON plans to roll out its solar installation services in the U.K. over the course of this year. The company has developed a launch plan that will target the Midlands of the U.K. initially and later move towards servicing the country as a whole.

Installation operations in the U.K. will not be directly handled by E.ON. The company has stated that they will be teaming up with a partner to facilitate all product installations. This is being done in an effort to reach larger areas of clients, rather than one concentrated area.

E.ON Solar and Storage represents yet another E.ON initiative to promote renewable energy solutions in Europe. With existing operations in Germany, Sweden, Italy, Hungary, Czech Republic, Romania, Slovakia, and Turkey, beginning work in the U.K. seems to be a natural next step for the organization. Success in the U.K. solar and storage markets could further solidify the great progress E.ON has made globally in this industry.