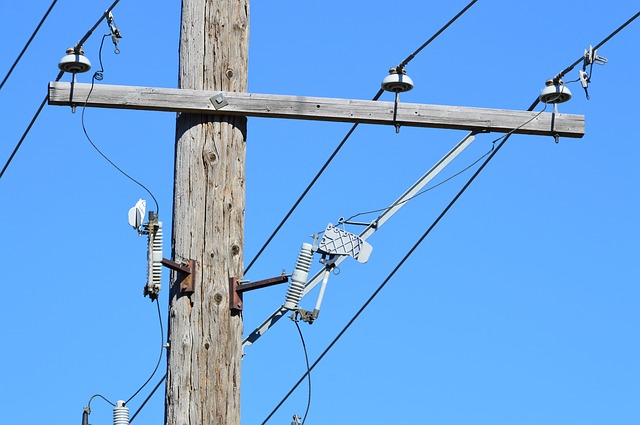 If you live in North Carolina, chances are you’ve seen ads promoting Duke Energy’s 10-year, $13.8 billion Power/Forward Carolinas initiative. Under the guise of ‘modernization,’ Duke’s pricey proposal would be one of the single largest capital expenditures by the utility and effectively ensure long-term shareholder profits.

Vote Solar is opposing Duke’s Power/Forward proposal because it is yet another play to sink customer funds into unsubstantiated investments to the sole benefit of shareholders — and it will undermine customers, clean energy progress, and North Carolina’s economy along the way. Power/Forward also represents a worrying trend among investor-owned utilities that will have damaging repercussions for the clean energy industry nationwide.

At a time when states are scrambling to attract private investments and corporate growth at a sustainable pace, Power/Forward has managed to alarm a huge spectrum of North Carolina’s business, industrial, and environmental communities. Here’s why.

Power/Forward is a 10-year capital spending package in the North Carolina transmission and distribution (T&D) system. At $13.8 billion, Duke’s proposal would be one of the single largest capital expenditures by the utility and effectively double its Transmission and Distribution Rate Base[1] — which is a major source of shareholder profits. To put that number in perspective, the cost of Power/Forward is greater than the total state revenue from personal income taxes in 2016.

While Duke is marketing Power/Forward as an investment in a modern grid — and charging customers as if it were — there is very little about Power/Forward that is modern.

Instead, the vast majority of the $13.8 billion proposal seeks to charge customers for routine maintenance services that they already pay for, such as tree-trimming or powerline pole replacement. In fact, our review of Power/Forward found that less than five percent of the proposal was earmarked for investments that aren’t already classified as routine maintenance, which currently has a budget of over $4 billion. 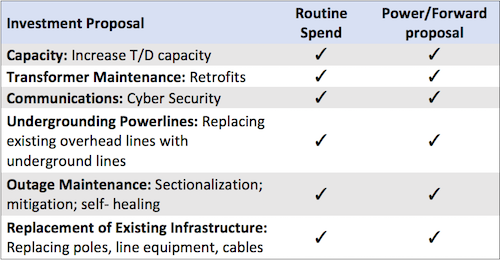 None of Power/Forward’s investments have been vetted through any cost-benefit analysis or compared against other more cost effective investments for improving reliability and resiliency, such as demand response, microgrids, and storage.

In addition, half of the plan is for a single investment: replacing overhead power lines with underground power lines[2]. Undergrounding existing power lines is largely considered a ‘gold plating’ mechanism for improving reliability and has historically been deemed ‘uneconomic’ by the Public Staff, who said in testimony:

“There is nothing about undergrounding distribution lines that should be considered new, modern, extraordinary or outside the scope of normal operations… based on the information currently available, the Public Staff is not persuaded that all the components of [Power/Forward] initiative will result in modernizing the grid.”

But Public Staff was not the only party that found the Power/Forward unjustified. Every party that has intervened to assess Power/Forward has described the investments as “unsubstantiated,” “unnecessary,” “speculative,” “flawed” or “threaten to unbalance the regulatory framework.”

In addition to being misleading and unjustified, Power/Forward just does not make any economic sense. With a $13.8 billion investment of customer funds, one would expect the average customer to receive a substantial benefit. Unfortunately, that is not the case. From Duke’s own analysis, the return on customers’ Power/Forward investment is a potential extra 1.5 hours of uninterrupted power. For residential customers, that means the average household would be paying, on average, $480 a year for an hour of electricity. For commercial customers, that cost could be closer to $37,000, and potentially an order-of magnitude higher for industrials.

Power/Forward also has negative consequences for customers’ control over their energy expenditures and the adoption of clean energy. Duke admitted during a recent hearing that Power/Forward would substantially raise customers’ utility bills, though it failed to disclose by how much[3]. A number of intervening parties did the math and calculated that at $13.8 billion, the average family in North Carolina could see close to a 50 percent rate hike, while the average business would see a 40 percent rate increase[4].

Those rate increases could come in the form of a fixed charge on customers’ utility bill. If Power/Forward is approved in its entirety, along with existing customer charges, more than a third of a residential bills could be fixed — that is, come in the form of upfront, monthly charges, before a customer actually buys any electricity.

The problem with high fixed charges is that they reduce the value proposition of rooftop solar, battery storage, and energy efficiency —critical components of a modern grid. And because high fixed charges render customers powerless to do anything to reduce a major chunk of their bill, they inherently discriminate against low-income and fixed-income customers, whose energy expenditures are a larger proportion of their household budget. Fixed charges also translate to a line-item on any business’ expense sheet that they can’t avoid.

Despite splashy marketing ads featuring renewables and touting job growth, Duke’s plan puts solar out of reach for customers, makes it much harder for clean energy companies to survive, and makes it more expensive to do business in North Carolina.

That’s why CUCA, a leading voice of the state’s major businesses, went so far as to say that based on the rate hikes, the more appropriate name for Power/Forward is “GRIM,” as Duke’s plan will have grim financial consequences for North Carolina consumers and the state’s economy.

In the utility business, the ability to continually maintain and grow shareholder profits depends on the continued expansion of capital investments. For decades, these capital investments translated to power plants. But in an era of flat and even declining electricity demand, Duke Energy (like many utilities) is shifting from being a company that primarily invests in generation to a company that primarily invests in transmission and distribution infrastructure (T&D).

A review of Duke’s 2016 fourth quarter shareholder presentation shows that over the next three years, the company will be growing its value through investments in the transmission and distribution system. By 2021, T&D investments will represent more than half of total growth capital, compared to generation, which will only represent 29 percent.

This is a significant change from historical investment strategies. Across the entire Duke Energy Corporation portfolio, T&D investments will represent 57 percent of the electric utilities & infrastructure growth capital over that same period[6]. And the Power/Forward proposal is a major part of that capital growth. Of the projected 23 percent growth in capital for Duke in North Carolina, 78 percent is attributed to the proposal.

When placed in context, it’s clear that Duke plans to make money for its shareholders through unsubstantiated T&D investments, and that Power/Forward proposal is the lion’s share of the equation[7].

Duke isn’t the only utility trying to use the guise of grid modernization to mask reinvestments in conventional infrastructure spending. We have seen similar approaches in Virginia, Washington D.C, California, Massachusetts, and Colorado.

To be clear, investment in grid modernization is a good thing. In fact, it is essential for a number of obvious and less obvious reasons. But investments in the grid, whether they be routine maintenance or with the purpose of modernization, must be cost-effective, efficient, and facilitate the improved use of distributed resources — and put the needs of customers and the economy above shareholders. That all requires a collaborative, thoughtful, and thorough planning process.

Our electricity system has evolved dramatically in recent years. The proliferation of distributed resources, innovations in communications, and new business models for grid services that exist today did not exist a decade ago. If utilities don’t plan around that new and evolving landscape and continue to sink money into the same infrastructure, customers may end up overpaying for an inefficient electric system that only serves shareholders.

This is happening on the watch of local policymakers — state legislators, the Governor, and the Commission. As one of the largest capital investments in history, greater oversight and consensus from a broad spectrum of stakeholders is critical. Without it, Duke will write itself a blank check using customer dollars.

This article was originally published by Vote Solar here and was republished with permission.

[2] Of the $13 billion dollars requested for Power/Forward, the largest single category of investment at $4.9 billion is for undergrounding power lines. Docket No. E-2, SUB 1142.

[4] Direct Testimony of Kevin O’Donnell on behalf of the Carolina Customers Association, Inc. (herein “O’Donnell Direct”), in reference to a presentation by Ms. Kendal Bowman at NC Leg. Working Group on Feb. 10, 2017. On Feb. 10, 2017 Ms. Kendal Bowman of Duke Energy made a presentation to the NC Legislative Working Group and provided the annual rate increases expected by Duke over the next 10 years to pay for its proposed “investment” into the State.

[5]Of the $13 billion dollars requested for Power/Forward, the largest single category of investment at $7 billion is for undergrounding power lines. Docket No. E-2, SUB 1142 and Docket No. E-7, Sub 1146.