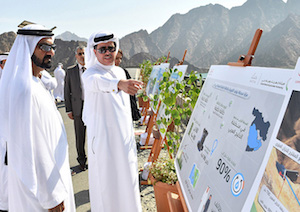 The Dubai Electricity and Water Authority (DEWA) on Dec. 20 said that it will build the Gulf Cooperating Council region’s first hydroelectric power station — a 250-MW pumped storage hydro plant that will be powered by solar PV.

The new facility is one of several new projects announced by DEWA as part of the Hatta Comprehensive Development Plan.

According to DEWA, the pumped storage hydro plant will be completed within five years.

DEWA’s other projects include installing electric vehicle charging stations in Hatta and solar PV panels on rooftops to produce electricity from solar power.

“[These] projects will create 200 permanent technical, administrative and operational jobs in Hatta. Another 300 jobs are expected to be created by the Visitor Centre, and other outdoor activities and tourist facilities associated with the project. Over 2,000 jobs will be available during the implementation phase,” HE Saeed Mohammed Al Tayer CEO of DEWA said in a statement.

The new projects are part of DEWA’s effort to fulfill the Dubai Clean Energy Strategy 2050, which was launched by HH Sheikh Mohammed bin Rashid Al Maktoum. The strategy aims to provide 7 percent of Dubai’s total power output from clean energy by 2020, 25 percent by 2030, and 75 percent by 2050.