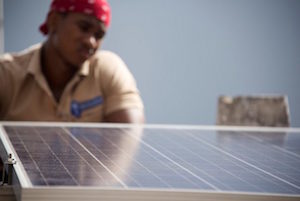 The growing support for the nonprofit Solar Head of State from a selection of high-profile people is a testament to the valuable vision that today’s young business men and women bring to the solar sector.

More About Solar Head of State’s Installation in St. Lucia

The government of St. Lucia partnered with Solar Head of State to install solar panels on the public residence of the Governor-General, Government House. According to co-founder and Director James Ellsmoor, the 5.4-kW grid-tied system will save the government about US$150,000 over the system’s lifetime.

Check out this slide show with more details about the installation.

Solar in the Caribbean — An Installation in Saint Lucia

In 2018, Renewable Energy World will recognize 40 solar professionals under the age of 40 who are fearlessly challenging and changing traditional solar business models.