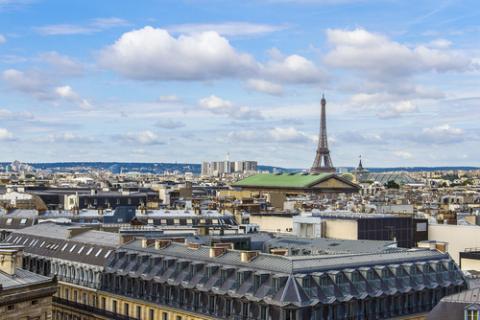 PARIS — In the midst of a suburban sprawl halfway between the Eiffel Tower and Paris’s busy Orly airport, a drilling crew works night and day burrowing deep into the Earth’s crust in search of underground heat.

The muddied workers from Cofor and Schlumberger Ltd., an oil-services company that typically sinks wells in the deserts of Oman and deep waters off the shores of Brazil, will spend four months in Villejuif on the edges of the French capital. Perched on a towering rig, they will bore 2 kilometers, or 1.3 miles, under a tract of land wedged between low-income housing and the neat little white crosses of a local cemetery.

The wells will provide heat to nearby homes, schools and hospitals for decades to come as part of a broader push around the globe to develop geothermal power. The Paris region has the world’s second largest concentration after Iceland of so-called low-energy geothermal installations. It was also coveted for its shale oil prior to 2011 when France became the first nation to ban fracking.

“We are in a great place right now,” said Michel Andres, head of Semhach SA, which operates the geothermal network in Villejuif, Chevilly-Larue and L’Hay-les-Roses, the biggest of its kind in Europe.

That wasn’t always the case. The new wells will be the first in 30 years for the municipally-owned utility. As with its nuclear push, which has left France the most reliant country in the world on such energy for electricity, the geothermal installations were born out of a quest for energy independence. Dozens of geothermal installations were built around Paris in the early 1980s. Many were subsequently plugged and shut following financial pressure and technical problems.

Now, as governments and companies around the globe develop renewable energy from wind and sun, they’re also looking at ways to capture naturally-occurring and always-available underground heat. French renewable energy represents around 14 percent of that consumed. The European Union has targeted 20 percent by 2020 for member countries.

Energy Minister Segolene Royal is promoting geothermal in France and plans to visit a site near Villejuif this month. The energy got a boost after the ban on hydraulic fracturing technology, known as fracking.

State subsidies for geothermal energy are helping to breath new life and 30 million euros ($40 million) in investment into Semhach’s plant. Drilling the additional wells will allow extension by a quarter of the company’s heating network — the equivalent of 35,000 homes.

The geothermal installed capacity, at 16.5 megawatts, is small compared with the more than 128,000 megawatts of electricity that France’s power infrastructure is capable of producing.

Geothermal’s adoption looks slow relative to other renewables. In 2013, it grew at 3 percent, compared with growth of 21 percent for wind-power and 53 percent for solar, according to a survey of 24 countries by the Washington-based Earth Policy Institute. Still, that was geothermal’s fastest growth since 2008.

The French plan calls for raising geothermal capacity almost fourfold to 80 megawatts by 2020, according to SER, making it an important source of heating energy. It currently represents between 3 percent and 6 percent of total heat production in France.

In the region around Paris, the aquifers in the Dogger layer of sediment provide geothermal heat for just 170,000 homes, according to BRGM, the French Geological Survey whose CFG Services engineering unit is overseeing the Villejuif wells.

Nor is geothermal energy without some risk. As with fracking, drilling deep wells has been known to cause earthquakes. A project near St. Gallen, Switzerland, was suspected of contributing to a magnitude 3.5 earthquake in 2013.

The geothermal wells around Paris, though, aren’t as deep as in Switzerland and won’t need fracking, according to Andres. While a certain amount of rock “stimulation” with acids may be needed to get the warm waters flowing, they aren’t expected to pose problems.

Europe’s biggest utilities GDF Suez SA and Electricite de France SA are also pursuing geothermal in the region. GDF is starting a 32 million-euro project in the nearby towns of Arcueil and Gentilly.

After drilling wells at the end of last year, the 13- kilometer network is scheduled to begin supplying heat and hot water to about 10,000 homes in 2015, it said on its website.

“In the next five years we plan to develop one or two geothermal projects a year” near Paris, Damien Terouanne, head of GDF’s unit Cofely Reseaux, said in a statement. Underground heat is “plentiful” in the region, he said.

Rival EDF through its Dalkia unit operates half of the existing installations around Paris and has plans for more, according to its website.

Cofor just completed drilling work on deep geothermal wells in Rittershoffen in Alsace designed to provide electricity to a nearby food processing factory owned by Roquette Freres SA, according to the company.