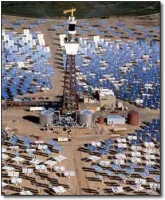 Washington, D.C. [RenewableEnergyAccess.com] The U.S. Department of Energy’s (DOE) Office of Science has released a report describing the basic research needed to produce “revolutionary progress in bringing solar energy to its full potential in the energy marketplace.” The report resulted from a workshop of 200 scientists held earlier this year.

“This report demonstrates the important contribution the entire scientific community can make to the development of new sustainable energy resources,” said Raymond L. Orbach, Director of DOE’s Office of Science. “Science and basic research can and must play a key role in addressing the energy security needs of our nation.” “The tax credits contained in the historic energy bill signed by President Bush will greatly help expand the use of renewable energy,” said Orbach. “This research will help improve a critical component of renewable energy, solar technology, in the future. Increasing the use of renewable energy is a clear way to help meet our growing energy needs using environmentally-friendly power sources.” Every hour, more energy from sunlight strikes the Earth than is consumed on the planet in a year. Yet today solar electricity provides only approximately one thousandth of the total electricity supply. The report notes that a “huge gap between our present use of solar energy and its enormous undeveloped potential defines a grand challenge in energy research” and that “sunlight is a compelling solution to our need for clean, abundant sources of energy in the future.” The report notes that progress in the proposed research could lead to: artificial “molecular machines” that turn sunlight into chemical fuel; “smart materials” based on nature’s ability to transfer captured solar energy with no energy loss; self-repairing solar conversion systems; devices that absorb all the colors in the solar spectrum for energy conversion, not just a fraction; far more efficient solar cells created using nanotechnologies; and new materials for high-capacity, slow-release thermal storage. The report further notes that revolutionary breakthroughs come only from basic research and that, “We must understand the fundamental principles of solar energy conversion and develop new materials that exploit them.” Solar energy conversion systems fall into three categories: solar electricity, solar fuels and solar thermal systems. Workshop participants considered the potential of all three approaches. They identified 13 priority research directions with the “potential to produce revolutionary, not evolutionary, breakthroughs in materials and processes for solar energy utilization.” Cross-cutting research directions include: coaxing cheap materials to perform as well as expensive materials; developing new solar cell designs that surpass traditional efficiency limits; finding catalysts that enable inexpensive, efficient conversion of solar energy into chemical fuels; and developing materials for solar energy conversion infrastructure, such as transparent conductors and robust, inexpensive thermal management materials. The Office of Basic Energy Sciences in DOE’s Office of Science organized the 2005 workshop on solar energy research needs. Two hundred scientists from the U.S., Europe and Asia examined the challenges to developing solar energy as a competitive energy source and identified the basic research directions that show promise to overcome these challenges. The workshop was the second in a series following the 2002 Basic Energy Sciences Advisory Committee study “Basic Research Needs to Assure a Secure Energy Future.” The first workshop examined basic research needs for the hydrogen economy. The Basic Research Needs for Solar Energy Utilization report can be viewed and downloaded at the following link.