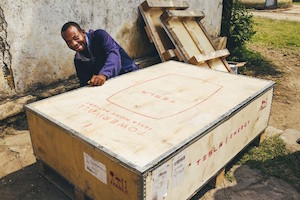 This is an excerpt from the new book: Off Grid Solar: A handbook for Photovoltaics with Lead-Acid or Lithium-Ion batteries.

Off Grid solar is the ideal form of self-reliance. With solar and energy storage you don’t need to pay bills to a utility or buy an endless supply of fuel for your generator, you can harvest energy from the sky. By avoiding dirty fossil fuels, you’re also not contributing to climate change. We’ve been waiting for a silver bullet and it’s here.

Come On… What Is So Great About Solar?

To me, the most interesting fact about solar is that there is no cost for the fuel, unlike fossil fuels. That means that as the cost to manufacture solar equipment continues to decrease, solar will quickly become the cheapest energy source on the planet. It is also hugely abundant everywhere…

Solar is by far the most abundant energy source on our planet.

This is what is so great about solar:

What’s the Catch? I Thought Solar Was Expensive?

Solar equipment is really expensive, or at least it used to be. Back in the 1950s, when the solar photovoltaic cell was first invented by Bell Labs, it was so expensive that it wasn’t even considered a viable energy source unless you were designing a satellite for outer space. If you wanted electricity in those days, fossil fuel was the most versatile and inexpensive source of energy. Hydroelectric dams were an inexpensive source of renewable energy, but they were and still are extremely dependent on regional resources. They have their own environment issues, too, as they damage the surrounding natural ecosystem.

Cost of PV Over Time

Fossil fuel costs have fluctuated radically over time and the average prices over the long-term have been increasing, if not skyrocketing. For decades we have been building a global infrastructure around fossil fuels. Our economy depends on it, and it is difficult to change our infrastructure until it’s extremely cost effective to recoup the sunk cost. But the compound negative effects on our environment along with a growing scarcity of supply — and thus, increasing costs — makes the transition away from fossil fuels inevitable.

Luckily, we now have a viable, cost-effective renewable energy source: solar. The cost of solar has dropped over 100 times since its invention decades ago. Yet despite this, many people globally still live without access to energy.

“The 1.2 billion people living without access to the power grid spend about $27 billion annually on lighting and mobile-phone charging with kerosene, candles, battery torches or other fossil-fuel powered stopgap technologies.

About 1-in-3 off-grid households globally will use off-grid solar by 2020, according to our baseline forecast.”

In 2013, the World Bank stated that over 1.4 billion people have no access to electricity worldwide — almost all live in developing countries. This includes about 550 million in Africa, and over 400 million in India. Access to energy can be expensive if one is not located near a utility grid. Dirty fuels, such as diesel, kerosene, and charcoal, have historically been the easiest energy source, because until recently there wasn’t a good alternative. Now that’s changed, thanks to solar technology.

In many markets, the cost of electricity from diesel is $0.28 per kWh and the cost to use kerosene for lighting is equivalent to $3.00 per kWh. Solar energy is already significantly cheaper than current energy sources and, in some markets, is quickly replacing dirty fuels as an energy source. Since fuel is free with solar, there are few opportunities for price spikes in the market.

The current limitations to widespread solar are not centered on cost, efficiency, or a need for advancements in technology. The limitations are mostly due to a lack of widespread knowledge on the subject.

Once this knowledge achieves greater ubiquity, the materials will be distributed as needed. It’s just a matter of time until the rest of the world favors solar purely for the reduced cost of energy, not to mention that it’s a clear solution towards combating climate change.

Many successful charitable foundations, like GivePower and Grid Alternatives, are donating and installing solar equipment to improve the lives of people in developing communities. They are doing amazing work and should continue doing this work, as it is certainly a part of the solution to climate change. That said, massive global impact in energy security and quality of life will only come from distributing our knowledge, not our stuff.

It is not sufficient to just spread the knowledge that works for us in our own, specific region of the world without proper context. Every community has its own needs, resources, and challenges.

We must also expand our knowledge to include a person or community’s unique, local situation before we offer anything. This requires action from self-starters with a stake in the prosperity of their community, ones who recognize the local challenges and apply new strategies to improve their infrastructure.

Sharing ideas empowers people to become community builders. It creates steady long-term growth as opposed to the short-term gain from donating a “magic energy box” that makes electricity. By sharing knowledge, community leaders can install, maintain, and troubleshoot their own solar systems long after the charitable foundation has left.

Why Then, If the Technology Is So Inexpensive and Readily Available, Hasn’t Solar Taken Off Like Wildfire?

Solar equipment is complicated to manufacture and therefore is centrally made and distributed around the world. The equipment is bulky and fragile, so it can be a costly mistake if it gets damaged in transport or is used improperly after installation. Also, it is fairly difficult to distribute solar equipment to a foreign country. In many developing countries getting through customs is a dreadful process filled with long delays, fees, and even bribes. The process is only slightly better when people within the country import solar products to sell within their community, but they typically pay much more for lower quality products compared to countries with established trade agreements.

As solar equipment becomes more commonly distributed as a traded good, it’s inevitable that it will become less expensive and of higher quality. Solar hasn’t yet taken off like wildfire, but the solar revolution has certainly begun. In fact, I have seen solar equipment in almost every remote village I’ve ever visited. In Nebaj, a remote town in Guatemala, the hardware store sold many sizes of solar panels and deep cycle batteries. 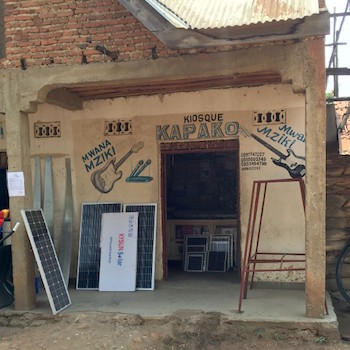 Image: Store in Kiwanja, Democratic Republic of the Congo

Deep in the Congo I saw a store selling solar panels, batteries, and musical instruments — the essentials to life. In many of these stores the products for sale were of low quality and were not designed for efficiency or longevity, instead they were falsely labeled to appear as if they were high quality. For instance, a solar panel in the Congo had a homemade label maker sticker inside of the glass that said “German Quality 25 Years.”

Regardless of the quality, this type of equipment is already making its way to this remote village far from the original manufacturing site. That is amazing evidence that off grid solar technology is prime to propagate around the planet, electrifying any of the world’s remote villages far from the grid.

Get Pumped! Solar Is Our Future

In case you forgot, solar energy is free! The technology available for sale today can be used to build a sustainable energy infrastructure in our near future. Today, as a global community, we have the knowledge and resources to live a life without fossil fuels. No matter whether you want to reduce your dependency on fossil fuel, live a life disconnected from the grid, or reduce your impact on climate change, solar is the technology that will get you there.

With 140,000 km2 of solar PV, or approximately 1.5 percent of the Sahara Desert, we could produce enough energy to fulfill the entire global demand for electricity. That’s with today’s PV technology, not something futuristic or theoretical. When you think of the area of the planet that we’ve already paved with roads, littered with buildings, or developed for farming, using a small amount of that space for solar PV is not unrealistic. This fact alone convinces me that solar energy is not just exciting, but it is the only logical solution for a sustainable future. 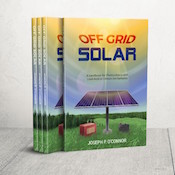 Joe O’Connor is the author of Off Grid Solar: A handbook for Photovoltaics with Lead-Acid or Lithium-Ion batteries, available now on Amazon.