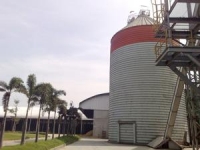 Electricity generation today is moving towards a more decentralised model where generation is close to demand. Possible benefits are diminished transmission and distribution losses and investments, improved energy efficiency, and increased security of supply. Implementing a large central power plant is extremely challenging in terms of site availability, as well as public concern about environmental issues.

Distributed generation (DG) offers opportunities that can overcome these issues. Due to Thai government incentive schemes such as the feed-in tariff, DG will be more attractive for developers and investors going forward. DG development is therefore aiming at high penetration across the country. Small Power Producer (SPP) and Very Small Power Producer (VSPP) programmes are examples of success stories under the DG schemes. Both the SPP and VSPP programmes are implemented in order to promote primary energy savings and encourage the use of alternative energy in the power generation sector. 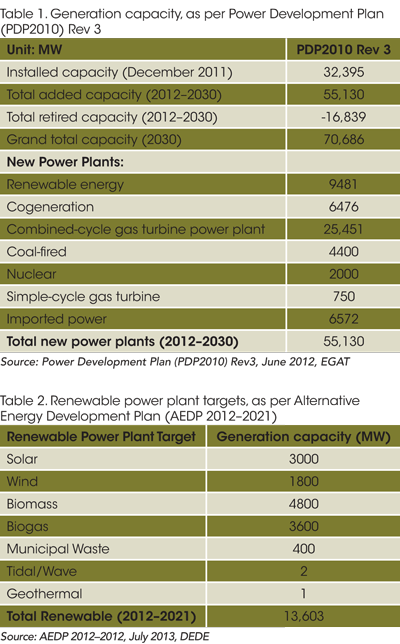 As of December 2013, the government has released SPP licences (power purchase agreements or PPAs) for 11,988 MW (129 projects) and VSPP licences for 3727 MW (888 projects), and more than 3250 MW are in the process of being licenced. Furthermore, future DG in Thailand will continue the growth that has allowed it to align with the country’s power development plan and national policy, which increased the renewable energy target to 25 percent of generation in 2012.

Thailand’s total power generation was 33,681 MW as of December 2013, which is 3.3 percent up from the previous year. Growth in power demand averages around 4 percent annually. Thailand’s generation system consists of the Electricity Generating Authority of Thailand (EGAT), a state-owned utility, at 45 percent; independent power producers (IPPs) at 38 percent; SPPs at 10 percent, and imported electricity at 7 percent. Power system planning is based on a long-term national power development plan (PDP). The PDP is implemented based on electricity demand growth rate, Thai GDP, government policy, a national energy efficiency development plan (EE plan) and an alternative energy development plan (AEDP). 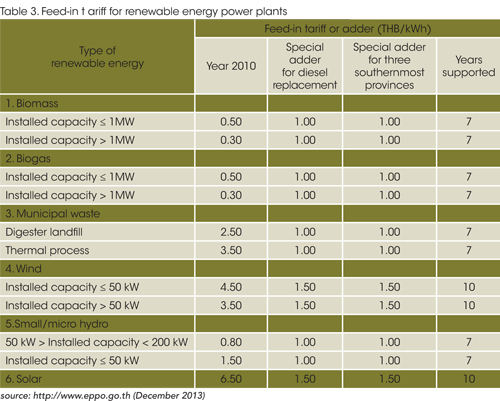 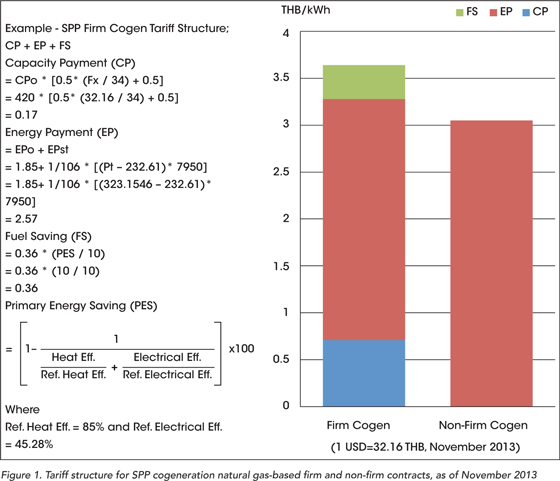 However, the government is also focusing on promoting renewable energy in order to diversify the fuel type usage in the power sector. The renewable target was originally set at 9481 MW, but has been adjusted to 13,603 MW to be in line with the new Alternative Energy Development Plan, AEDP 2012–2021, as shown in Table 2.

The draft PDP 2014 (2013–2030), will retain the same complement of new natural gas plants — cogeneration, CCGT power plants and simple-cycle gas turbine plants. However, the major change from the previous PDP will be that renewable energy capacity will increase from 9481 MW to 13,603 MW. 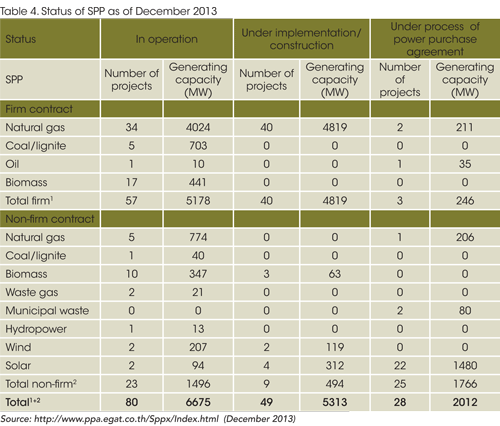 1. Solar PV rooftop programme
The government has launched a special feed-in tariff (FiT) for rooftop solar photovoltaic (PV) projects in order to encourage investment in the household, factory and small, medium and large enterprise sectors. The FiTs are supported for a 25-year period and are categorised according to installed capacity: 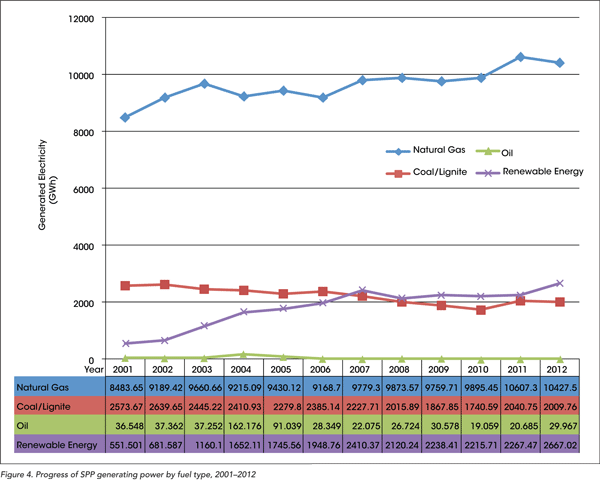 2. Solar PV for community (city) initiative programme
The government has encouraged community participation in renewable energy development via direct investment. An investment fund of THB60 million has been released to villages and communities in order to meet the solar PV community target of 800 MW. The project is aiming at 1 MW per village or community and will be supported for a 25-year period.

In addition to the special programme for solar PV, the government also has a core FiT scheme for all renewable energy. Table 3 presents the FiT rates that currently apply for renewable energy in SPP and VSPP schemes.

The SPP programme was originally initiated to promote energy efficiency in the industrial sector. In the past, boilers were mostly used in industry as a source for process steam and hot water. To promote the replacement of those conventional boilers with more efficient technologies, the government developed the SPP scheme for cogeneration plants fuelled by natural gas or coal. Recently, renewable energy for potential on-site generation has been included in the SPP scheme.

To qualify as a SPP cogeneration, a plant must utilise 5 percent of waste heat; and must demonstrate performance achievement through primary energy saving (PES), with PES ≥10 percent to get the full FiT (THB0.36/kWh).

The SPP scheme offers two types of contract: a ‘firm’ contract for 20–25 years, and a ‘non-firm’ contract for five years. Under such a contract, the SPPs sell electricity to EGAT, but they are also allowed to sell electricity directly to industrial customers. Both contracts allow the sale of up to 90 MW to EGAT based on their guaranteed generating capacity. A firm contract will receive a capacity payment and an energy payment, while a non-firm contract will receive only an energy payment.

As of December 2013, the majority (70 percent) of SPPs under operation are natural gas-based CHP plants which are running under firm contract. The rest are coal or lignite-based cogeneration plants (12 percent) and renewable energy plants (18 percent).

The CP represents the base capacity payment (CPo) of the long-run avoided cost of an EGAT large combined-cycle power plant, which is valued at THB420/kW and adjusted for exchange rate variations compared to the base exchange rate of that month.

The EP represents the base price of gas (EPo) per kWh, adjusted for fluctuations in the gas price (Pt) at the time it is purchased from the Petroleum Authority of Thailand (PTT).

The FS payment represents the efficiency of the cogeneration plant compared to separate conventional electrical and thermal generation through the PES principle. A fuel saving incentive ranges between THB0–0.36/kWh, depending on the PES achievement. To get the full incentive of THB0.36/kWh, the plant must achieve a minimum PES of 10 percent.

For a non-firm gas cogeneration contract, the tariff includes only the EP, which is based on the price of natural gas price announced every month by EGAT. The EP will be adjusted by a factor based on the selling time during on and off-peak times. The non-firm tariff is commonly lower than that of a firm contract, as shown in Figure 1.

Figure 2 shows the trend of natural gas price increases over the last three years. The electricity tariff for SPP gas cogeneration moves in the same direction as the natural gas price, so there is no negative impact on SPP in a high gas price situation because the tariff has been constructed in such a way that the impact is absorbed.

Since the initiation of the framework, the SPP scheme has grown to its third iteration, SPP3. The status of total SPP projects as of December 2013 is given in Table 4. The total amount of SPP in operation is now 6675 MW (80 projects), while 49 projects (5313 MW) are under implementation and construction, which means that SPP licences have been released for 11,988 MW (129 projects). In addition, around 2012 MW (28 projects) currently under the PPA signing process will also be added to the system.

SPP firm contracts are mostly for natural gas-based cogeneration plants; the rest use commercial fuel. The average capacity of a SPP firm contract is in the range of 110 MW–120 MW. For SPP non-firm contracts, renewable energy will generally be suitable for this dispatching profile, generating up to its availability. The majority of new and coming SPP non-firm renewable plants are solar PV projects.

Along with the SPP programme, the government has also released the Very Small Power Producer (VSPP) programme to support the generators that are small and selling less than 10 MW to the grid. The average size of a VSPP project is generally below 10 MW. The majority of VSPP projects in operation are small renewable energy plants (1471 MW). There are also natural gas-based cogeneration plants, however these are present in a small number (113 MW) because the generation cost of high natural gas prices in a small-scale project may not always be competitive with the grid electricity tariff.

The total amount of VSPP projects in operation is now 1585 MW (476 projects) and 2142 MW (412 projects) are under implementation and construction, which means VSPP licences have been released for 3727 MW (888 projects).

In summary, DG in Thailand has been significantly developed through national energy polices and government supporting schemes over the past decade and it will continue to have a bright future for the next 20 years.

Various measures have been initiated and applied to encourage investors, such as the FiT programme, government funding programme and energy efficiency funding. As a result, even high penetration of DG in the country can be expected.

However, these successful stories of DG development so far illustrate good progress when viewed from the generation side. In terms of grid operation, transmission and distribution for DG, challenges remain. Integration of DG into the system, fluctuation of renewables dispatching profiles, system stability and reliability are key challenges when there is high penetration of renewables-based DG.

The Thai government has foreseen these key obstacles and has started to explore options to cope with future generation by appointing a Thailand Smart Grid Committee and drawing up a roadmap. Nevertheless, the Smart Grid roadmap is still in its initial phase of foundation and framework study. The completion of a Smart Grid for full-scale integration would therefore be quite some time in future — planned for 2028–2032.