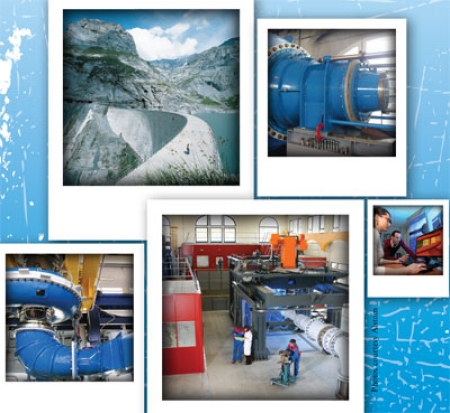 Throughout the world, new pumped-storage projects are being developed and existing facilities are being rehabilitated. HRW provides a sampling of project activity in Europe, Asia, Africa, and North America to illustrate the breadth and depth of this market sector.

By Elizabeth A. Ingram
associate editor of HRW

Pumped-storage hydro is attractive primarily because it is the only renewable energy source that can be used to balance intermittent resources such as wind and solar. Thus, pumped storage can enable countries to meet targets for reducing greenhouse gas emissions and build clean renewable energy capacity. Another attractive aspect of pumped storage is the fact that environmental effects can be minimized through construction of an underground powerhouse.

Both new development and rehabilitation activity is strong in the pumped-storage sector throughout the world. To illustrate the breadth and depth of activity occurring in this market sector, HRW presents examples of specific work under way, including seven facilities under construction, three that began operating in the past year, and five that are being rehabilitated and/or upgraded.

In total, the scope of this pumped storage activity is very broad. The 15 projects featured in this article encompass nine countries. The facilities range in size from 150 to 1,352 MW, with a total generating capacity of more than 8,800 MW. And the work detailed below represents a total investment of well over US$6.65 billion.

In the following paragraphs, HRW summarizes development activity at seven pumped-storage projects in Europe, Africa, and Asia. Together, these plants — all expected to be operating by 2015 — will provide more than 4,600 MW of new clean, renewable electrical capacity.

While these are not the only pumped-storage projects under development, they provide good examples of the type of construction occurring today.

Energias de Portugal is building the 171-MW Baixo Sabor project on the Sabor River in northern Portugal. Baixo Sabor is being built as part of a government plan to boost hydroelectric power production in Portugal.

Construction of the Baixo Sabor project began in June 2008, and it is scheduled to begin operating in early 2013. Project costs are estimated at 354 million euros (US$484 million).

The 1,352-MW Ingula project is under construction in the Little Drakensberg Mountains, on the border between Free State and KwaZulu-Natal in South Africa. Owner Eskom Holdings Ltd. is building the project as part of its program to meet South Africa’s growing power needs.

Hokkaido Electric Power Co. is building the 600-MW Kyogoku project on the Pepenai and Bihinai tributaries of the Shiribetsu River in Japan. This project is being built to provide electricity during periods of peak demand.

The Kyogoku project involves building two dams to form the upper and lower reservoirs, with a gross head of about 400 meters. The project will feature three turbine-generator units.

The project is anticipated to cost 135 billion yen (US$1.36 billion). Construction of the project began in 2002. When Kyogoku is complete in October 2015, the facility is expected to produce 525.6 gigawatt-hours of electricity
each year.

The 480-MW Limberg 2 project, owned by Verbund Austrian Hydro Power AG, is under construction to expand electrical capacity in Austria.

The first of the two units at Limberg 2 is scheduled to be commissioned in the fall of 2011, with full commercial operation in March 2012.

Kraftwerke Linth-Limmern AG is developing the 1,000-MW Limmern project in Linthal Valley in eastern Switzerland. The plant is being built to provide electricity during periods of peak demand and to help further develop Switzerland’s low-carbon power generation.

The underground powerhouse will contain four 250-MW reversible vertical Francis pump-turbines and four 280-MVa vertical asynchronous motor-generator units. The plant will pump water from the existing Lake Limmern into the existing Lake Mutt. A new gravity dam will be built at the Muttsee Reservoir to increase its storage capacity.

The first of the four units is expected to begin operating in 2015. Construction of Limmern is expected to cost 1.8 billion francs (US$1.77 billion).

The 628-MW Nant de Drance project in southwest Switzerland is being developed by a joint venture of energy provider Alpiq, federal railway SBB, and Forces Motrices Valaisannes. Nant de Drance will utilize the height difference between two existing reservoirs, Emosson and Vieux Emosson, to produce about 1.5 million megawatt-hours of peaking power each year.

Austria utility Verbund Austrian Hydro Power AG is moving forward with construction of the 430-MW Reisseck 2 project. This project is an addition to the six-plant, 138.1-MW Reisseck/Kreuzeck complex in Upper Carinthia.

For this facility, a 5-kilometer-long tunnel will connect the Reisseck annual storage reservoir and the 730-MW Malta Hauptstufe plant. The existing Grosser Muhldorfer See Reservoir will be used as an upper reservoir in pump operation while the lower reservoirs will be the Gosskar and Galgenbichl reservoirs of the Malta power plant group.

Construction of the project, with an underground powerhouse, is expected to cost about 215 million euros (US$287 million).

Of all the continents, Europe is the biggest hotbed of pumped-storage development. Three projects reaching completion on the continent in the past year were: 185-MW Avce in Slovenia and 150-MW Feldsee and 450-MW Kopswerk 2 in Austria. Development of these three facilities involved investments of US$714 million. Together, they will produce 1,055 gigawatt-hours of electricity each year.

The 185-MW Avce plant was scheduled to begin operating in November 2009 on the Soca River in Slovenia. Soske Elektrarne Nova Gorica d.o.o. developed the 120 million euros (US$152 million) project to allow the country to use its nighttime electricity surplus, which otherwise is exported at low prices, to pump water into Avce’s upper reservoir so that electricity can be produced when prices are high.

The upper reservoir was built in a natural depression, using embankments to increase its storage capacity. The existing Ajba reservoir of the Plave hydro plant serves as the lower reservoir. The underground powerhouse contains a variable speed reversible vertical Francis pump-turbine.

Construction of this facility, which is expected to produce 426 gigawatt-hours of electricity annually, began in December 2004 and cost 120 million euros (US$152 million).

In Carinthia, Austria, the first unit of the 150-MW Feldsee project began operating in September 2009.

Feldsee was built to increase hydro capacity in the country and improve the reliability of the power supply.

The project cost 50 million euros (US$63.3 million), and the first powerhouse is expected to generate 15.7 gigawatt-hours of electricity annually.

The next step in development of this project is to add a second 75-MW unit in a second powerhouse. This unit is expected to be operational by the end of 2010.

The 450-MW Kopswerk 2 project, on the Ill River at the extreme western tip of Austria, was inaugurated in May 2009. Vorarlberger Illwerke AG of Austria and EnGW AG of Germany built this project, which adjoins the conventional 247-MW Kopswerk 1 hydro project.

The project was built using two existing reservoirs. The powerhouse is in an underground cavern and contains three Pelton turbines attached to synchronous generators.

The project is designed to be highly flexible. The units can operate in “standby” mode, in which the turbine and pump operate on the network simultaneously. In this mode, operation can be changed to either turbine or pump very quickly.

The project cost 395 million euros (US$499 million) to build and is expected to produce 614 gigawatt-hours of electricity each year. It began supplying power to the grid at the end of 2008.

More than 127,000 MW of pumped-storage capacity is operating worldwide. Much of this capacity was built 30 to 50 years ago. Consequently, in many facilities, refurbishment and modernization of equipment is needed to increase efficiency and capacity.

The five projects featured below are good examples of the kind of refurbishment occurring. They each began operating between the early 1950s and 1973. Total current capacity of the plants is nearly 3,000 MW. Through refurbishment, upgrades, and repowering, more than 750 MW of new electrical capacity will be available.

The New York Power Authority (NYPA) in the United States is in the fourth and final phase of a four-year, US$135 million life extension and modernization program at its 1,040-MW Blenheim-Gilboa project. This project, on Schoharie Creek in New York, United States, began operating in 1973.

In September 2006, NYPA launched a program to replace major mechanical and electrical components and perform maintenance and repairs to most other parts. Three of the four pump-turbine units at Blenheim-Gilboa have been refurbished; the fourth is expected to resume service in June 2010.

When the life extension and modernization program is complete in June 2010, capacity of the project will have increased to 1,160 MW.

Duke Energy’s 610-MW Jocassee project is undergoing a rehabilitation that involves upgrading all four turbine-generating units to improve efficiency and to increase capacity.

This project is on the Keowee River in South Carolina, United States, and began operating in 1973.

The scope of the Jocassee rehabilitation predominantly is limited to the mechanical overhaul of the turbine mechanism components that normally would be reworked when upgrading a turbine.

Voith Hydro is the contractor for the rehab program.

Rehabilitation work on Units 3 and 4 was completed in 2007. Work on Units 1 and 2 began in September 2007 and is expected to be complete in May 2011. This rehab work will bring total capacity of the project to 660 MW.

UkrHydroenergo in the Ukraine is rehabilitating its 225-MW Kyiv project as part of a program to improve operational stability and reliability of hydro plants in the country.

Construction of this plant was completed in 1972.

Work at Kyiv, on the Dnieper River, will include installing new governors and protection and control systems for the three turbine-generating units in the powerhouse. ABB AB is supplying voltage and current transformers.

One unit is being rehabilitated each year, starting in 2008 and ending in 2010. When completed, this work is expected to increase annual generation at the plant by 18 gigawatt-hours.

Energias de Portugal (EDP) is undertaking a “repowering” project at its existing Venda Nova Dam on the Rabagao River.

This 97-meter-high arch gravity dam was completed in the early 1950s. Original capacity of the plant at this site, which has been decommissioned, was 90 MW.

The repowering involves building a new powerhouse, Venda Nova 3, with a capacity of 435 MW. This repowering is part of a government program to make improvements to existing dams and hydro projects to increase their generating capacity. The program includes building ten new projects and expanding five existing projects.

In November 2009, EDP began seeking bids to supply all equipment for Venda Nova 3, including reversible pump-turbines and motor-generators. The project is expected to begin operating in 2014.

Society Electrique de l’Our (SEO) in Luxembourg is adding a pump-turbine to its 1,096-MW Vianden project.

This project, on the Our River on the border with Germany, contains ten units. SEO is working to add a 200-MW unit to the powerhouse, which began operating in 1963. The unit is being added to increase capacity available to integrate wind generation into the grid and to provide ancillary services (such as voltage stability and black start capability).

Lahmeyer International performed preliminary study and detailed design for adding Unit 11. This work will involve extending the facility — including excavation of the machine cavern, a vertical shaft, and a pressure tunnel — and increasing the storage capacity of both reservoirs.

The work was scheduled to begin by the end of 2009. The expansion project is expected to require 48 months and to cost 150 million euros (US$225 million).