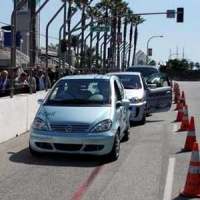 Long Beach, California [RenewableEnergyAccess.com] This week the hydrogen energy industry convened in Los Angeles for its annual trade show and conference. A wide range of companies were on hand, from small manufacturers offering pressurized tanks all the way up to the world’s leading automakers showing their latest hydrogen fuel cell vehicles. There’s an unquestionable buzz and optimism surrounding this industry, yet a different one, arguably less hyped-up, than was in play a few years ago when President George W. Bush announced his support for hydrogen in his 2003 state of the Union Address. No, the veritable explosion of interest from companies, investors and entrepreneurs has mellowed out a bit since then. And it just might be a good thing.