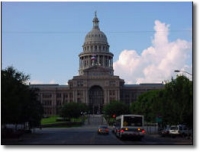 Austin, Texas is once again the venue of choice for another gathering of renewable energy companies and advocates as the American Solar Energy Society’s (ASES) 32nd national solar energy conference, SOLAR 2003 kicked off at the downtown convention center.

Austin, Texas – June 24, 2003 [SolarAccess.com] All things solar are on display including solar-related services, heavy-duty batteries, inverters, charge-controllers, monitoring equipment, thermal and photovoltaic modules and renewable energy system consulting. While the technologies on display from the 49 exhibitors are proving themselves successfully throughout the world, it seems that getting the U.S. federal government to recognize solar energy’s achievements and to support it in any serious fashion is entirely another story. The current energy bill is a perfect case in point. According to Becky Campbell-Howe, the Director of Operations for ASES, most members of ASES don’t support the bill in its current form since it does very little for renewables such as solar, and wind, instead diverting money into the Bush Administration’s hydrogen energy plans. The sticky point for the renewable energy industry is that the administration’s efforts will rely predominantly on fossil fuels such as natural gas, coal, and nuclear to create the hydrogen. Many see this as antithetical to the greater goal of energy independence and a sustainable energy supply. “This is a very important issue that has risen to the top of our agenda,” Campbell-Howe said. “It could really leave renewables behind.” A prevailing attitude in the industry is that the administration’s stated goals for a hydrogen economy are just a way to keep business among fossil fuel companies and to stave off any real change that renewables can offer. This “green-wash,” as many refer to it, seems to be making a real attempt to leave the real renewable energy industry in the dust. While a number of studies and reports have come out touting natural gas as the cheapest way to generate pure hydrogen, many feel otherwise including Mikeal Nicklas, chair of the ASES board of directors. “Wind power at three cents per kWh offers a cheaper way to produce hydrogen than (natural) gas, coal or nukes,” Nicklas said. “The scary part is the DOE is very disproportionately biased versus coal and oil.” Despite the popular assumption that ASES is focused entirely on solar, Nicklas said their role goes beyond solar and embraces all truly renewable and sustainable energy technologies. Their goal is a sustainable energy infrastructure based on renewable energy. “We’re promoting wind as well, and our strength lies in our ability to bring the different industries together,” Nicklas said. Nicklas sees tremendous opportunity for renewables if they are synergistically tied together to solve energy and hydrogen needs. The increased capacity factor if renewables were employed on a large scale would further drive down the price of renewable energy. Paul Notari, who chaired ASES for the past two years, said any attempts at real change are going to be increasingly focused at the state level since a successful bottom-up approach stands a better chance at swaying the federal government. This is already the case since many states such as California, New York, and New Jersey, have made some very real commitments to renewables through generous Renewable Portfolio Standards (RPS) which in some cases are calling for up to 20 percent of a State’s electical generation capacity to come from renewables. The current energy bill does include an RPS but with minimal goal of five percent, it’s not seen as beneficial for renewables. “We’re opposed to the present energy bill,” Notari said. “The RPS will dilute any progress that the states have made.” Joel Stronberg, ASES’s representative in Washington D.C., said a watered-down RPS will create an atmosphere where states will no longer see the need to require their own RPS legislation and will instead acquiesce to these minimal national demands which could likely be met through existing hydroelectric resources alone. “States tend to be more responsive to the people’s wishes,” Stronberg said. “There’s only so much top-down progress you can get done. Asking to force the states to do something won’t help. The state’s do a better job of defining the national role so that’s where the model needs to be built.” Another factor which can’t be ignored is that despite how important creating fair and meaningful renewable energy legislation is to its industries and supporters, it’s inevitably overshadowed by the federal government’s more immediate concerns such as taxes, health care and protecting homeland security. Despite the constant upward battle that renewables have faced for decades there are many positive points for the industry as a whole. “If there’s a silver lining in all this, it’s the bridge being solidified between the building design and architecture community and the solar energy industry,” said Kevin Hagen of Shuksan Energy a renewable energy consulting company. Many think that industrial-scale solar thermal such as the SEGS plants built in the 1970s which are still is use today, will see a reemergence. There are recent plans for a 50 MW power plant in Nevada to be designed and built by SolarGenix, formerly Duke Solar. “Concentrating solar will experience a renaissance,” said Nortari. “In fact, it’s a mystery why it hasn’t taken off already.” Despite the incessant hurdles for renewable energy in the face of the status quo, especially at the federal level, the advances which have been made at the state level show the most promise for the industry. Whether through the purchase of renewable energy systems or through the proliferation and success of green tags programs, consumers are also making more informed and conscientious decisions about their energy choices. While the ASES show didn’t quite draw the record attendance that the wind energy conference did, it’s numbers have been increasing every year. Last year’s venue location in Reno, Nevada drew more of a crowd due to its proximity to renewable energy-friendly California. While there are still many conferences, speeches, and events to go before the convention wraps up on Thursday, the folks at ASES are already looking forward to next years show in Portland, Oregon from July 11-14, and seeing the further results of renewable energy’s continued progress on its sometimes bumpy road.