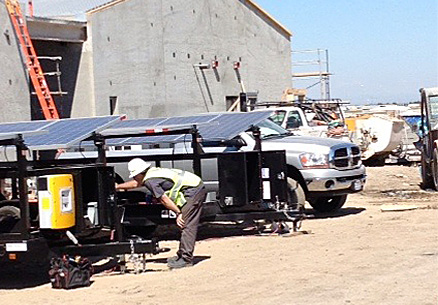 Jeff Carpoff had a lot to celebrate as friends and business associates gathered at his company’s Christmas party last year.

The one-time auto mechanic and his wife, Paulette, had started a solar company about a decade earlier that was doing remarkably well — so well that it could count Warren Buffett’s Berkshire Hathaway Inc. as an investor in its funds. Their business, making mobile solar generators, had afforded them lavish goodies. They owned more than 90 cars, from classic Fords and Plymouths to Bentleys, at least 20 properties, and even a professional baseball team in Martinez, just northeast of San Francisco.

And now as the year came to a close, here was Pitbull, the rapper from Miami, headlining their Christmas party at a swanky Fairmont hotel, according to people familiar with the matter. The event, tweeted Kyle Larson, a race-car driver once sponsored by a Carpoff company, was the “best holiday party I’ve ever been to by far!!”

A few days later, when law enforcement agents showed up at their front door, the Carpoffs’ extravagant life came crashing down. It was an edifice largely built on an alleged fraud — a Ponzi-type scheme, in essence, say federal authorities — that was as elaborate and brazen as their spending habits.

Their company, DC Solar, is now out of business, most of its 100-strong workforce unemployed. Their home in Martinez, a sprawling 4,100-square-foot affair, is in foreclosure, the swimming pool littered with leaves. When FBI agents visited the home on that day in late December, they took many of the luxury cars. They also seized a pile of cash — $1.8 million in all — that had been secreted away in a safe and elsewhere in one of the couple’s offices.

The Carpoffs, authorities contend, had managed to parlay a do-good incentive to encourage solar investments into an $800 million fraud scheme. Promising big federal tax credits and profits, their pitch enticed sophisticated investors, even though it came from an enterprise little-known outside of California and the car-racing world.

Not only did Berkshire bite, sinking $340 million alone, but so did insurer Progressive Corp.  It had to reverse tax benefits worth more than $150 million due mostly to its DC Solar investments. A half-dozen or so regional banks were financial backers, too, including East West Bancorp Inc., Valley National Bancorp and United Financial Bancorp Inc. All plunked their money in funds set up by DC Solar that afforded significant tax credits and possible profits.

The company was supposed to use the money to build mobile generators, which supply power at sporting events and other outdoor venues. But evidence suggested DC Solar “engaged in nearly no legitimate business,” the government said. The company built and leased only a fraction of the more than 12,000 mobile units it had claimed were in use, the FBI said. Instead, the company allegedly used much of the money from new investors to pay off old ones — and to fund the couple’s spending.

DC Solar’s precipitous fall is now forcing many of the investors to take charges on tax breaks that they thought were worth millions of dollars. It’s also putting the spotlight on the federal tax credit, which since 2006 has helped fuel solar’s surge from an alternative electrical resource to the U.S. mainstream. Dozens of the country’s biggest companies, from JPMorgan Chase & Co. and Bank of America Corp. to even paint maker Sherwin-Williams Co., now invest in renewable energy to benefit from the tax credits. (Sherwin-Williams was among DC Solar’s investors.)

While the program has been largely free of irregularities, the DC Solar tale now stands as a warning sign of how investors, perhaps too hungry for the credits, may be lax in scrutinizing the health of the underlying business. Indeed, the alleged scam started to crack only when a former employee told federal authorities that they believed the number of leased mobile units claimed by DC Solar was false, according to a court filing.

“Having that pot of money incentivizes this type of behavior,” said Nicolas Loris, an economist at the conservative-leaning Heritage Foundation think tank, commenting generally on tax credits. “Sometimes it’s difficult to catch this behavior because of the intricacy of the way these policies are woven into our energy markets.”

“DC Solar Solutions was an innovative, substantial and credible solar-energy business. It manufactured thousands of mobile solar generators, which were examined and physically delivered,” Carpoff’s attorney, Malcolm Segal, said in a statement. “Any allegation that there was a Ponzi scheme or anything illegal about the operation of the business is without merit.”

The FBI and Securities & Exchange Commission have said they were investigating, according to separate February filings. Representatives for the FBI and SEC declined to comment.

Berkshire said it was “more likely than not” that the tax benefits it received from certain investments from 2015 to 2018 were invalid, according to a May filing that didn’t name the sponsor. It later identified that sponsor as DC Solar. The company took a $377 million charge in the first quarter to reverse the tax benefit.

Progressive spokesman Jeff Sibel said the company believes it was defrauded after investing in three funds with DC Solar. The goal was to earn “attractive investment returns” and to support the environment, he said. It also took a writedown of $24.3 million primarily because of the DC Solar investments.  Valley National said in a regulatory filing last month it’s coordinating with 10 other investors to investigate the allegations.

Jeff Carpoff had come from an unlikely background to end up hobnobbing with financiers. For years he had been an auto mechanic, eventually running a car-repair company, servicing Land Rover and Jaguar vehicles, according to his LinkedIn page. Intrigued by solar, he founded DC Solar more than a decade ago, building a line of generators and light towers. Veering from the usual bets on panels scattered across large farms or atop homes, Carpoff offered portable units rather than diesel generators that could be placed on wheeled trailers.

Among the “early adapters” of the company’s products, Carpoff claimed on LinkedIn, were AT&T Inc. and T-Mobile US Inc. (AT&T said DC Solar was never one of its vendors.)

“Within a short time, we were doing over $60 million in sales,” he told Inc. magazine, in an interview published before reports emerged about the federal raids. And the key was the investment tax credit. It “helped us create a financial model that enabled us to keep growing.”

There seemed little reason to doubt any of this at the time. A 2016 U.S. Transportation Department press release described DC Solar as among “some of the most innovative folks in the private sector.” The well-known law firm Nixon Peabody LLP was an adviser. (Nixon Peabody said DC Solar is no longer a client.)

The Carpoffs also worked to build their profile locally, gaining favorable media coverage of its charitable pursuits, such as helping Northern California neighborhoods devastated by wildfires. Their professional baseball team, the Martinez Clippers, played in a city-owned stadium. (The team, unaffiliated with Major League Baseball, is now defunct.)

Meanwhile, the couple was living large. At staff meetings, Jeff Carpoff often would pull out a wad of cash from his pocket — at times more than $2,000 — and ask employees to guess how much he was holding, according to people familiar with the matter. The person who came closest, if within about $50, would get the money, one of the people said.

Luxury vehicles were common in DC Solar’s parking lot, including Paulette’s burgundy-colored Bentley, according to people who had offices near the warehouse. Just last year, the couple spent $105,682 for a 2018 Dodge Challenger SRT Demon and $192,550 more for a 1967 Ford Mustang GT 500 Super Snake, court filings show.

To boost the brand, the couple relied heavily on auto racing. They had agreed to sponsor Chip Ganassi Racing in the NASCAR Xfinity Series and drivers including Ross Chastain. These associations were useful for more than just publicity, Carpoff suggested in the Inc. interview.

The track “lets us bring in people from the renewable finance industry, show them a great time, show our product in use,” he told the publication.

Overall, DC Solar attracted at least a dozen investors in complex deals that raised money through what’s known as tax-equity funds, according to the government’s allegations. In a typical DC Solar deal, filings show, investors bought each mobile unit for $150,000 but paid in cash only $45,000 — the maximum amount of the tax credit they could claim.

They were told that the company would then lease the equipment to end-users such as telecom companies. The lease money would pay down the remainder of the $150,000 cost plus provide any profit to the investor.

Except, DC Solar didn’t usually lease the generators to third parties as described by the company, the filings say. Instead, about 90% of the money one of its affiliated companies claimed as lease revenue was actually new investors’ money. In 2016, for example, that sum amounted to $50 million of the claimed $55 million in revenue, a former employee told authorities.

As for the generators themselves, DC Solar allegedly made it appear it had leased more than it did, filings say. Employees placed GPS transponders in various spots where, “in truth, they were not located,” according to the government filings.

Investigators later said they did find many generators, though not where the company claimed. Some were stored at locations including the Las Vegas Motor Speedway. Others were sitting, unused, outside DC Solar’s offices.

On one recent afternoon, workers for an auction company were hauling dozens of the generators away. The building is now shuttered. In the darkened reception area, just one item is still visible: a lone silver Christmas tree.

–With assistance from Anousha Sakoui and Steven Church.