Many dam safety officials use probable maximum precipitation (PMP) for dam safety evaluations and design requirements. But the series of federal publications that provides PMP estimates is rapidly becoming outdated. When should a dam owner consider a new study?

Probable maximum precipitation, or PMP, has been used as a design basis for many state- and federally-regulated dams since the 1930s. Combined with a rainfall-runoff model for converting precipitation to a streamflow hydrograph, PMP is used to predict the timing, volume, and peak flow associated with extreme flood events at a dam. Designers obtain PMP values from a patchwork of hydrometeorological reports (HMRs) produced by the U.S. Weather Bureau or its successor, the National Weather Service (NWS), or from site-specific studies performed by private contractors. 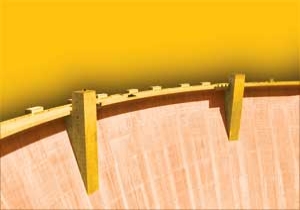 Although the PMP continues to be widely applied as a design standard, there is no corresponding national-scale effort to update decades-old HMRs. New PMP studies during the past decade are limited to regional or site-specific studies. Many recent site-specific studies have produced PMP values significantly different from the HMR values. Reasons for the differences include new storm data, improved analysis procedures, and technology advances such as weather radar and geographic information system (GIS) software. The results of these new studies raise new questions: Would similar results be obtained nationwide? Are the old HMRs systematically inaccurate?

The practice of using extreme rainfall values for computing design floods began in the 1930s. The upper limit to precipitation potential first was called the maximum possible precipitation (MPP), and the U.S. Weather Bureau’s Hydrometeorological Reports from 1939 to the 1950s used this designation. In 1956, federal agencies replaced the MPP with the PMP, reasoning that MPP carried too strong a connotation of a physical upper limit to precipitation and too little acknowledgement of the uncertainty of such estimates.

The NWS’s Hydrometeorological Report 59, published in 1999, gives the current definition of PMP:

…theoretically, the greatest depth of precipitation for a given duration that is physically possible over a given storm area at a particular geographic location at a certain time of year.

The science and technology of meteorology have not progressed to a level that permits direct computation of the theoretical greatest depth of precipitation. Instead, a procedure based on historic storms is the standard practice.1 Precipitation totals from the most intense storms that have occurred over a region represent the lowest potential levels of PMP. A basic assumption in the procedure is that the record of extreme storms is sufficiently large to represent the most efficient storm mechanisms but not the optimum available moisture that would accompany a PMP event.1,2 Storm efficiency is the ability of a storm to convert atmospheric moisture to precipitation through complex cloud physics mechanisms.

Evolution of the HMR series

The current set of HMRs was developed by the Weather Bureau and NWS over a period of more than 20 years and represents a variety of techniques and methods. The oldest HMR that is still considered current is HMR 49, published in 1977. Other current HMRs were published between 1978 and 1999. The series covers 50 states and Puerto Rico (see Figure 1).

A comprehensive database of historic storms is critical in developing PMP estimates for a region. The Weather Bureau and U.S. Army Corps of Engineers completed numerous analyses of extreme rainfall events through the 1950s. These efforts included collecting, quality controlling, and archiving many official and unofficial rainfall observations for each storm. One of the results of a storm analysis is a depth-area-duration table, showing the maximum depth of rainfall over various areas and for various durations during the storm. Since the mid-1950s, with the exception of site-specific studies and western U.S. storms analyzed for HMRs 57 and 59, only a few storms have been analyzed, the most recent being Hurricane Agnes in 1972. The most recent storm used in any of the HMR series occurred in 1995, and there remains a large backlog of unstudied storms.

The procedures used to develop generalized PMPs vary considerably among the reports. For example, HMR 49 specifies a ratio method to determine spatial and temporal characteristics of storm rainfall and has an additive procedure for orographic (mountain range) effects. In this method, a set of standard additive factors are applied across all storm areas and durations. Later HMRs use analyses of individual storm depth-area-duration rainfall patterns to evaluate spatial and temporal rainfall distributions and employ a multiplicative factor to address orographic effects.3 HMR 51, which covers the eastern two-thirds of the U.S., does not include any orographic adjustments but identifies two “stippled regions” in which the authors acknowledge that terrain effects were not evaluated and suggest that future NWS studies examine these regions more closely.4 Unfortunately, no such studies have been completed.

Over the past two decades, various advances have been made in the measurement and analysis of extreme rainfall events. For example, NWS NEXRAD (NEXt generation RADar) provides new opportunities to analyze temporal and spatial rainfall distributions, and GIS technology is being used to develop storm depth-area-duration tables. There also have been significant improvements in the meteorological understanding of rainfall production mechanisms. Computer models that determine atmospheric moisture trajectories provide reliable moisture inflow vectors for individual storms, especially useful for moisture sources over oceans. Some of these advances were used in the 1990s in HMRs 57 and 59.

HMRs 57 and 59 use storm depth-area-duration tables produced by a “mini-storm” analysis procedure developed at the Bureau of Reclamation. This procedure automated and standardized many tasks that previously were performed subjectively.6 A program called the Storm Precipitation Analysis System (SPAS) has been developed jointly by Applied Weather Associates LLC and Metstat Inc. of Windsor, Colo., to take advantage of NEXRAD data and GIS technology. Advanced quality control procedures and interpolation schemes are also incorporated.

SPAS results have been compared with previous NWS storm analyses and with an analytically constructed storm pattern where the rainfall distributions were known exactly. For the analytical storm, SPAS produced the exact solution. For the NWS-analyzed storms, most values in the depth-area-duration tables agreed within 5 percent. The SPAS program has been applied in site-specific PMP studies and extreme storm analyses throughout the U.S. It uses NEXRAD data when available but also can be used to analyze conventional rain gauge data. The program generates depth-area-duration tables, rainfall mass curves, and maps of rainfall (isohyetal maps) for historic storms (see Table 1 and Figure 2). Historically, storm analyses have been primarily dependent on subjective procedures. Although SPAS is highly automated, meteorologists interact to provide quality control and adjustments to the rainfall analysis procedures.

Storm analyses using NEXRAD are producing maximum rainfall amounts that were not observed using rain gauges. NEXRAD records rainfall continuously across an entire storm area, whereas in the past the spatial distribution of rain had to be inferred from a network of rain gauge points. For example, in the Gorham, Maine, storm of October 1996, the largest rain gauge observation was just over 19 inches, but NEXRAD data showed a storm total of 23 inches several miles offshore. One of the justifications for making conservative assumptions in developing the HMRs was the belief that rain gauges often did not capture the most intense storm cells. SPAS using NEXRAD data now captures and analyzes these intense storm cells that can occur between rain gauges.

Are the HMRs too conservative?

The HMR series is the standard source for PMP values across the U.S. Many regional and site-specific studies have also been completed, in most cases by private contractors, for regions where there was reason to believe the HMR values did not represent a specific location well. Most of these studies have been accepted by the Federal Energy Regulatory Commission and state regulators for computing the probable maximum flood at hydropower and water storage facilities. The 1993 Michigan-Wisconsin study, for example, produced significant reductions in PMP. The greatest reduction relative to HMR 51, around 20 percent, applied to storm durations up to 12 hours and area sizes up to 500 square miles.

For larger areas and longer durations, the regional study’s PMP values were generally 5 to 15 percent lower than the values from HMR 51. A recently completed statewide study for Nebraska shows even larger reductions from the HMR 51 values, especially over western Nebraska. Reductions of 22 to 26 percent also have resulted from site-specific studies in the mountains of northwestern Maine, in the Adirondack and Catskill mountains of New York, and along Colorado’s Front Range. Very recent studies in Arizona have produced significant reductions from HMR 49 PMP values.

Considering these results, should we draw the conclusion that the PMP values in the HMR series are consistently too large? Not necessarily. The HMRs provide generalized rainfall values that are not basin-specific and tend to represent the largest PMP values across broad regions. Site-specific PMP studies incorporate basin characteristics that are specific to the topography and local climate of the watershed being studied.

When to consider an alternative study

There is no objective way to assess the accuracy of PMP estimates in the HMR series. When considering whether a new study is warranted, meteorologists apply professional judgment and experience to consider a number of factors, including:

— The difference between PMP values and maximum observed rainfall over the surrounding meteorologically homogeneous region;

— The number and severity of recorded storms in the region, if a long record is available;

— Limitations on storm transposition in the region;

— The number, character, and interrelationship of maximizing steps;

— The reliability of any model used to relate rainfall to other meteorological variables; and

— The probability of exceeding the individual meteorological variables used in the models, taking care to avoid excessive compounding of rare events.3

Many of these issues are better addressed in some HMRs than in others. The oldest report, HMR 49, used methods that have been replaced in all subsequent publications. The second oldest, HMR 51, covers a large area — two-thirds of the lower 48 states — but provides no adjustments for barrier moisture depletion and limited elevation effects on moisture. Additionally, many extreme rainfall events have occurred in the HMR 51 domain since its publication, including Tropical Storm Alberto, Hurricanes Floyd and Ivan, and the storms that produced record flooding in the upper Midwest in 2008. Some of these have been analyzed for site-specific studies, but others remain unstudied. In contrast, California’s HMRs (58 and 59) utilize storms through 1995, new methods for considering orographic effects, and a “mini-storm” analysis procedure. Comparisons are under way to compare the mini-storm analysis results with SPAS analysis results for selected storms.

Arbitrary geographic boundaries also affect the use of the HMRs. For example, a dam owner in Arizona uses the 30-year-old HMR 49, while in neighboring California the applicable HMR is just ten years old. At the moment, however, it seems unlikely that further HMR updates are forthcoming from the NWS. The website for the Hydrometeorological Design Studies Center notes:

NOAA’s National Weather Service has provided PMP guidance and studies since the late 1940s at the request of various federal agencies and with funding provided by those agencies. In recent years that funding has diminished and gradually ceased. As a result we are unable to continue our PMP activities.

Therefore, dam owners, regulators, and designers who require PMP estimates need to carefully consider issues such as the currency of the storm database and the scientific and technological advances that were, or were not, applied in a given HMR. In some situations, it will be evident that the HMR does not represent local meteorology well. In such situations, experience has shown that a site-specific or detailed regional study has the potential to produce significantly different estimates than the prevailing HMR.