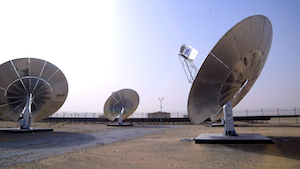 Concentrating solar power (CSP) has existed since 1866, but for the last couple of decades, photovoltaic (PV) has been the dominant solar technology. Now with technological advancements and energy storage, CSP is poised to make a significant comeback. Cleanergy AB, a Stirling CSP technology provider based in Sweden, has signed an agreement to deploy a 200-MW CSP project in China. Datang Holdings New Energy Technologies Ltd in China will secure government approvals and financing for this CSP project.

The project will be built in two phases: 50 MW in 2018 and 150 MW with latent heat storage. There are three forms to store heat: latent, sensible, and thermochemical. The latent heat storage uses the process of melting or crystallizing a material known as Phase Change Material (PCM). Cleanergy believes that it will be essential for all renewable technologies to be equipped with energy storage as penetration of renewable energy increases in the grid. “For CSP specifically, the competitiveness against PV hinges on a more efficient solution for delivery of dispatched energy,” commented Jonas Eklind, president and CEO of Cleanergy.

Aalborg CSP, another CSP provider, made a joint development agreement with SaltX Technology to offer cost-effective, fully-scalable, and dispatchable renewable energy solutions. Based in Sweden, SaltX has invented a patented technology to store thermal energy with salt.

“EnerStore, SaltX’s large-scale storage, is a thermochemical storage, which chemically holds the thermal energy in the salt so that the temperature 500 degree Celsius can be taken out at the same level without maintenance heating and with no or marginal heat losses,” explained Karl Bohman, CEO of SaltX Technology. “In addition, the EnerStore material, with the nano-coating, does not corrode as opposed to molten salt. It is non-toxic and can be recycled at the end of its life cycle.”

Eklind’s comment echoed this. “In order to compete with PV, the storage component in CSP is critical,” he said. 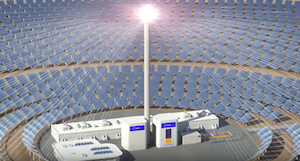 “We believe in moderate to accelerated growth scenarios for CSP based on the increasing need for dispatchable, load-following and indigenously sourced renewable energy generation capacity,” Eklind said. The scenarios that Eklind is referring to are CSP market projections from a report called Solar Thermal Electricity Global Outlook 2016 jointly produced by Greenpeace International, European Solar Thermal Electricity Association (ESTELA), and SolarPACES. In the report, under the current policy, by 2030, cumulative global CSP capacity will be 21 GW, 131 GW under a moderate scenario, and over 350 GW under an advanced scenario.

Bohman also predicts that the CSP build-out in China and Africa will explode over the next five years and the potential for EnerStore is estimated at over 10 billion euros per year. SaltX’s first commercial project with Aalborg CSP will be deployed in China or Africa.