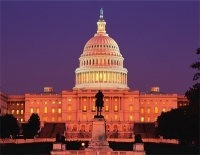 WASHINGTON, D.C. — A bill that would significantly increase hydropower spending in the 2012 Fiscal Year has gained congressional and presidential approval, multiple sources report.

The bill, which combines nine spending bills and has gained bipartisan support, provides US$59 million for the Department of Energy’s Energy Efficiency and Renewable Energy (EERE) Water Power Research and Development Program. Of that, $25 million would be earmarked for marine and hydrokinetic research, development and demonstration; $25 million would go to conventional hydropower; and the remainder would be used to develop infrastructure projects.

“NHA commends Senate and House appropriations leadership on putting together a package that invests in hydropower technologies, both conventional and new marine and hydrokinetic,” National Hydropower Association executive director Linda Church Ciocci said in a release.

The allocation is a $20 million increase from the 2011 Fiscal Year and $11.5 million above the budget request. In fact, the Water Power Program is the only renewable electricity to receive a funding increase.

“From conventional hydro and conduit projects to pumped storage to ocean and tidal technologies, growth throughout the hydropower sector will play a critical role in meeting our country’s clean energy and economic goals,” Ciocci said. “The tremendous support shown by Congress today sets a strong foundation to realize the benefits of affordable, reliable, sustainable hydropower generation.”