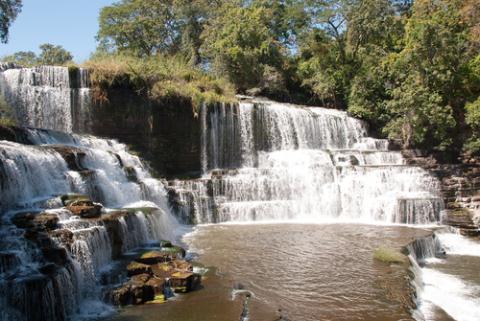 “We’re open to other operators” joining the bid groups, Kapandji told the iPad mining and infrastructure conference yesterday in the capital, Kinshasa. “The candidates are not closed.”

Congo will choose a development group for the 4,800-megawatt project in June or July of next year, Max Munga, Kapandji’s technical adviser, told the conference. The bid groups are currently made up of China Three Gorges Corp. and Sinohydro Corp.; Posco and Daewoo Corp. of South Korea in partnership with Canada’s SNC-Lavalin Group Inc.; and Actividades de Construccion y Servicios SA, based in Madrid, and Spain’s Eurofinsa Group.

Construction on the Congo River may begin in October 2015 and power generation could start in 2020. Congo is set to sign a treaty this month that will guarantee 2,500 megawatts from the project for South Africa.

Inga 3 will be the first step in the Grand Inga project, which may eventually produce more than 40,000 megawatts of electricity, making it the largest source of hydropower in the world. About 170 square kilometers (66 square miles) around the Congo River will be flooded to create a total of 8 Inga hydropower plants, Munga said.

Inga 1, built in 1972, and Inga 2, completed in 1982, have the capacity to produce about 1,775 megawatts, though they are being refurbished and operating below capacity.

For Inga 3, Congo will construct 1,841 kilometers of high-tension lines to its border with Zambia, Munga said. South Africa will install 1,540 kilometers of lines from Zambia through Zimbabwe to Witkop, he said. The total combined distance of the lines would stretch around the circumference of the earth, he said.

Congo will provide 1,300 megawatts of power from Inga 3 to miners in Katanga province, with the remaining 1,000 megawatts for internal use outside of mining, Munga said.

Congo is the world’s eighth-largest copper producer and its miners currently have a power deficit of more than 300 megawatts, according to Kapandji. The shortfall has forced some mining companies to install generators or buy electricity from Zambia to run processing plants.

The country only has about 2,400 megawatts of installed power capacity and because of mismanagement, only about half of that energy is available, according to the World Bank. Only 9 percent of Congo’s 70 million people have electricity, Kapandji said.

After the initial phase of Inga 3 construction is complete, an increase in the level of water powering its turbines could improve power generation by about 3,000 megawatts, Munga said, bringing the total capacity to 7,800 megawatts. Nigeria has shown interest in purchasing power from the next phase, he said.