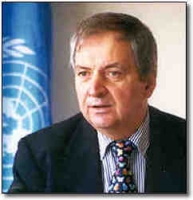 When teams from the United States and Britain invented the first computers, they cost many hundreds of thousands of dollars and were thought luxuries with little mass-market appeal. Indeed there was a time when it was thought that a modern industrialized country might, at a pinch, need only one or two computers.

May 3, 2004 [SolarAccess.com] Today, such a short-term, blinkered view seems amusing. Millions of people across the globe are now employed in the computer and related industries. The Internet revolution, based on the computer and computerized telecommunications, is creating a new, electronic-based, industrial and commercial age. We are now on the verge on another, separate but related industrial leap forward where the inefficient use of fossil fuels such as coal and oil is being reduced, and where, like the typewriter and the punch card machine of yesteryear, new competition is starting to make its mark. Modern conventional power stations are almost twice as efficient as those a few decades ago. Alternative energies, in the form of solar and wind power, are coming of age and the costs per unit of electricity continue to tumble. Fuel cells, powered by methane, ethanol or hydrogen, are out of the laboratory. Most car-makers including Toyota and Daimler Chrysler have at least one demonstration vehicle being road tested. General Motors, for example, reckons it will have a commercial vehicle available by 2010. Californiaýs new governor has pledged to have hydrogen fuelling stations along major highways by a similar date. That such developments are happening is in no small measure due to United Nations Framework Convention on Climate Change whose entry into force this past month we celebrate and the Kyoto Protocol, the international treaty spawned by the Convention designed to achieve cut backs in emissions of the gases that cause global warming. The Protocol’s creation, in Japan in 1997, followed compelling evidence from the 2,000 or so scientists of the Inter-Governmental Panel on Climate Change that the unbridled use of fossil fuels will trigger catastrophic, global effects including extreme, floods, droughts, sea level rise and the spread of disease. Few dispute these findings. What is slowing action are those whose abacuses and calculating machines are whirring trying to balance the Euros, Dollars, Rubles and Yen. Russia, whose ratification would bring Kyoto into force, has some who are convinced that the costs of compliance outweigh the economic advantages. Other voices, expressing similar concerns, continue to be voiced in the United States. New ones are exercising their vocal chords in Europe. I would ask those who view the Kyoto Protocol as a strait-jacket, as a constraint to economic growth, to think again and look beyond the simple sums and narrow calculations. Firstly, the targets for the first phase of greenhouse reductions, just over five percent between 2008 and 2012, are modest to say the least. Secondly, the Protocol was designed to be flexible. There are numerous actions that governments and industry can take, both at home and abroad, to cut back and offset emissions, including carbon trading. Indeed, the European Commission estimates that its Europe-wide trading scheme will reduce the costs of compliance by 35 percent, or Euros 1.3 billion by 2010. Provisions, such as the Clean Development Mechanism where industrial countries can offset their emissions by clean and green energy schemes in developing countries, will not only deliver much needed electricity to poorer parts of the world. They should increase the markets, exports and job creation prospects at home and abroad. The economic benefits of reducing our dependency on fossil fuels go further. Munich Re, one of the world’s biggest re-insurance companies, estimates that economic losses as a result of mainly climate-related disasters, reached some $65 billion in 2003. Then there are other economic impacts as a result of a continued, inefficient use of carbon-based fuels including those on human health and habitats and ecosystems, like forests and lakes. Estimating the precise, wider economic impacts, is no simple task. But David Pearce, a leading economics professor at University College London, has had a stab for the United Kingdom. Air pollution from traffic could be costing that country as much as $5 billion a year, mainly through ill health. New economic costs may be just on the horizon. In Jeju, South Korea, at the end of last month, UNEP held its annual gathering of environment ministers. Dust storms and dead zones in the oceans were prominently highlighted along with their links to pollution and climate change. Avoiding the massive threats posed by climate change and significant impacts of related air pollution requires imagination, vision and above all courage. There is also a moral dimension, given that those likely to suffer the most are the poorest of the poor, whose responsibility for unleashing the calamities of climate change are almost, if not totally, zero. Fighting climate change requires governments, business and citizens across the globe to harness the technologies in the pipeline and act to develop those still in the laboratory or the fertile, creative minds of the next generation of engineers. Imaginative tax systems and fiscal measures that stimulate innovation and life-style changes need to be part of the package. A fully operational Kyoto Protocol gives us the collective impetus to bring about change sooner rather than later. For the longer we delay, the more costly the price tag of inaction for people across the globe will be. So the Kyoto Protocol is not a recipe for economic disaster, quite the contrary. In the long run, it is likely to generate prosperity and financial savings rather than economic suicide. Sure there will be losers, as with the dawn of the computer where makers of typewriters, punch card machines and tabulators spring to mind. However not all went the way of the dinosaur. Some, like IBM, had the vision to restructure their old businesses and embrace the computer age. There may have been some pain, but the overall, long-term gain for those willing to change can, as ‘Big Blue’ showed, be enormous. By Klaus Toepfer, Executive Director of the United Nations Environment Programme (UNEP), on the 10th Anniversary of the Coming into Force of the Climate Change Convention (21 March 2004)